Foxes and wolves have long been beloved animals in Japan.
At first glance, the body of a fox or wolf looks similar to that of a dog, but each has its own characteristics.
In order to distinguish them from dogs and cats, it is important to draw foxes and wolves with a clear understanding of their characteristics.

So let’s take a closer look at the characteristics of foxes and wolves, and how to draw them.

Characteristics of the fox

Foxes are generally thin and supple, and their faces are somewhat sharp.
This impression is created by the following characteristics of the fox.

＜Characteristics of the fox
The tip of the nose is narrow and thin.
Sharp face with slightly hunched eyes
Thin arms and legs. 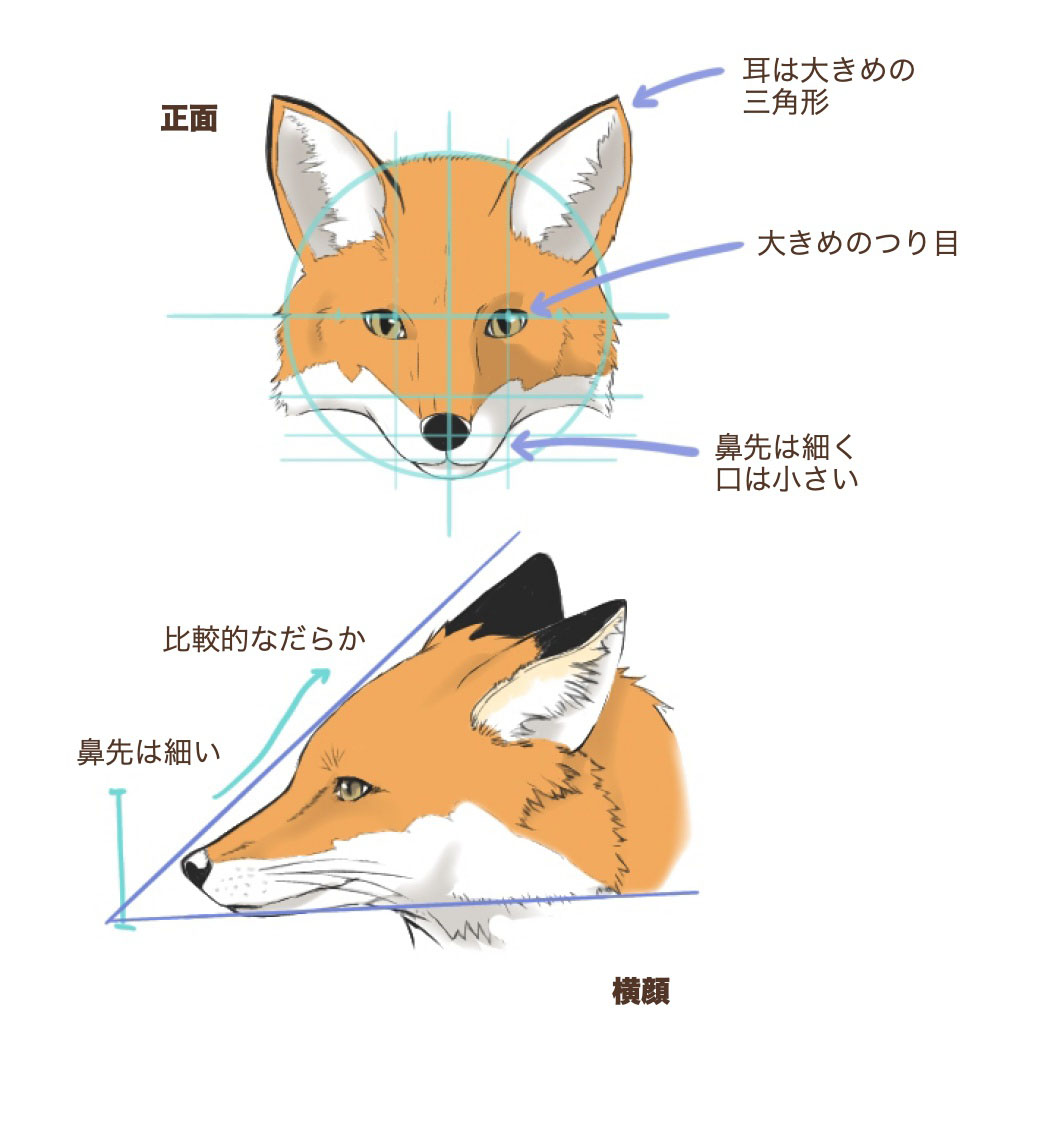 Let’s start by looking at how to draw a face.

The basic shape of the face is similar to a dog, but the tip of the nose is thinner and less thick.
The lower half of the face should be drawn with a sharp, compact image.

The eyes are large, with the corners of the eyes slightly upturned.
The color of the eyes is gold in the iris area.
The pupil is black and can be vertical like a cat. (*Eye color may vary by species.)

The ears are drawn with the image of a slightly larger triangle.
The back of the ears may be black or the same color as the body, so draw the type you want while referring to materials. 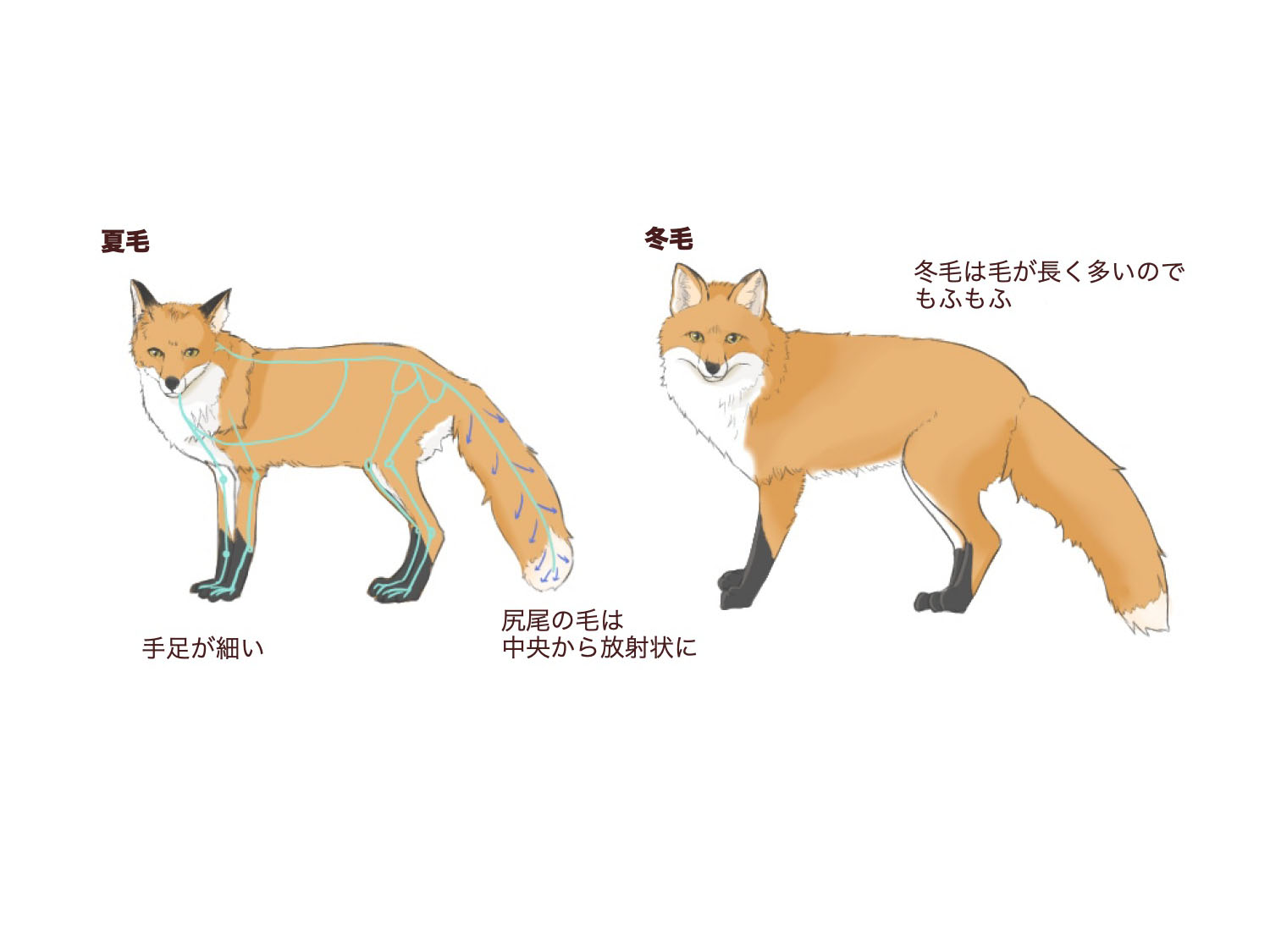 When drawing the body, I think it is easier to draw the skeleton first as a bite, or simply draw it briefly in parts.

The fox is basically slender and has thin arms and legs.
Their slender features stand out when they have summer fur.
On the other hand, when the fox has winter fur, the fur is longer and the body looks a little more rounded.
The tips of their limbs are either black, as shown in the illustration, or the same color as their body.

The tail is thin at the base and tip, and thicker and more cylindrical in the middle.
The hair on the tail should radiate outward from the center of the tail body.

Wolves are generally considered to be the largest of the canine family.
As a result, they have a large body and an overall stocky appearance.
The wolf also has a large nose and mouth, and a rather mature and distinct face.

＜Characteristics of wolves
Thick limbs
Slightly smaller eyes
Large nose.
A lot of hair around the face and neck.
Sturdy around the neck and shoulders. 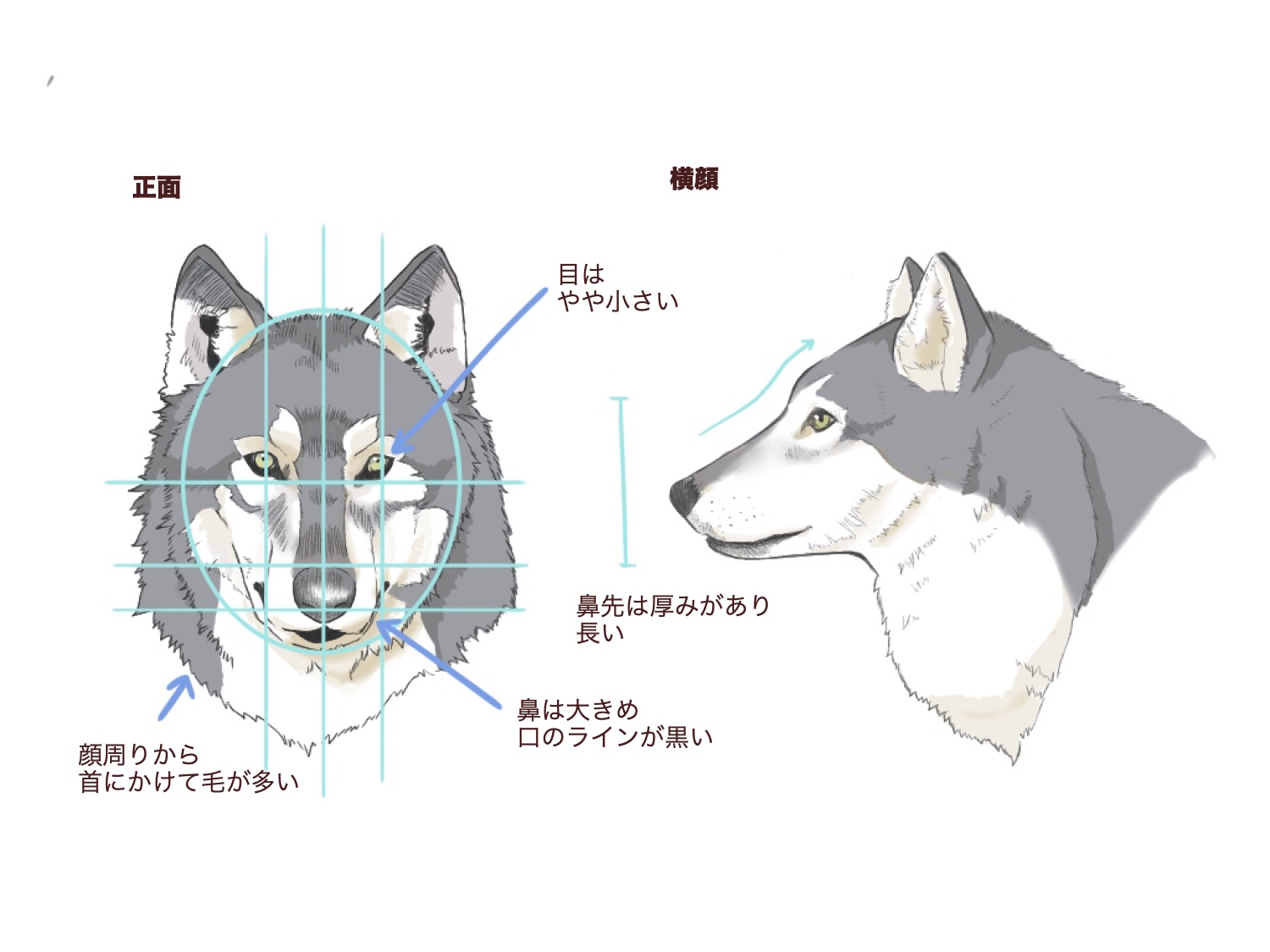 The wolf’s face has a mature appearance, with a long, nasal line from the eyes to the tip of the nose.
The nose and mouth are rather large, and the eyes are relatively small.

When drawing, first place the parts of the face with the thickness and length of the nose tip and the size of the nose in mind.

Another characteristic of wolves is that they have a lot of hair around their face and neck.
When drawing the hair around the face, be conscious of the bundles of hair and draw them in crudely.
By drawing large hair bundles and making the hair move, you can express wildness and roughness. 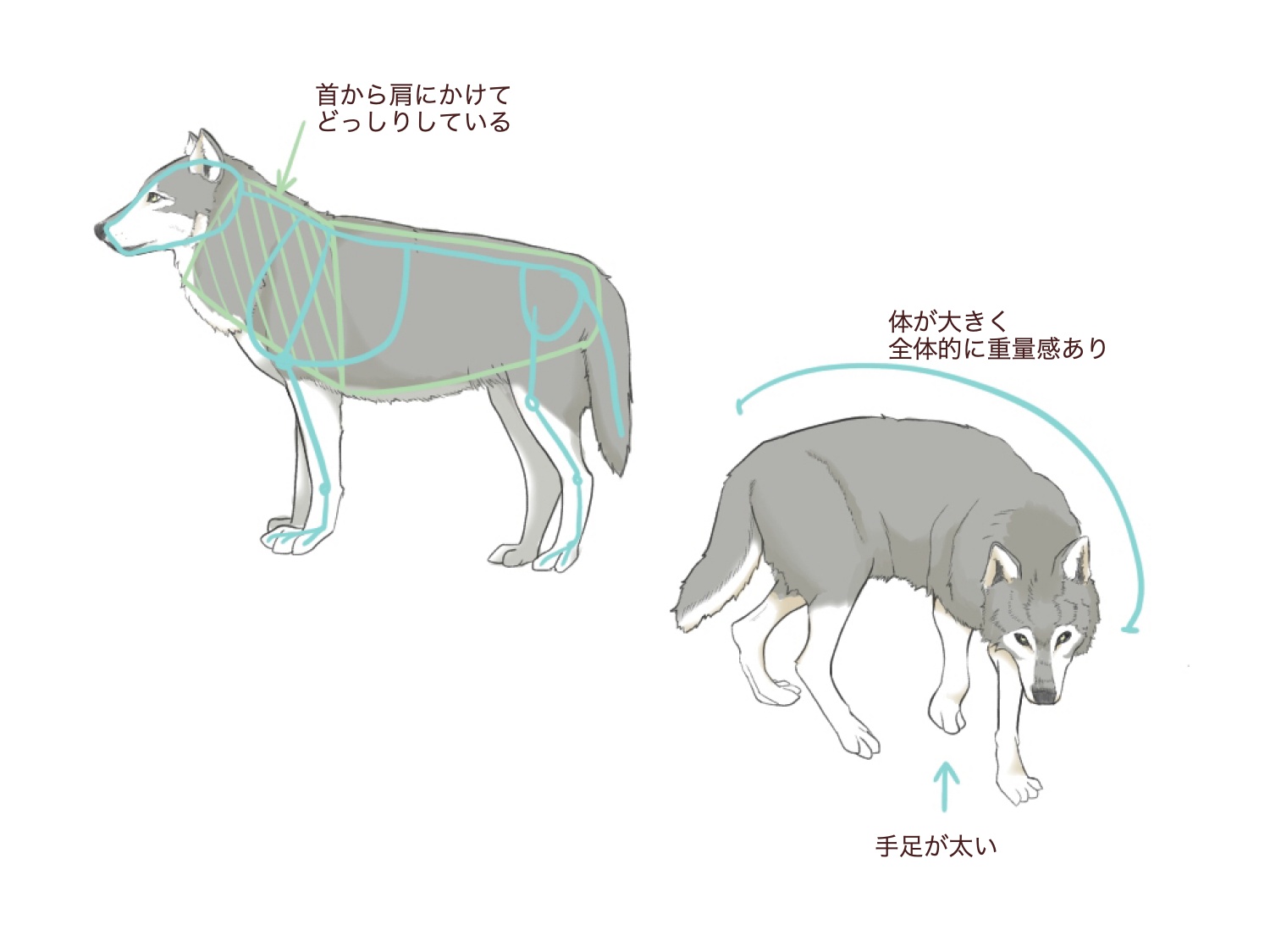 The wolf’s body is large and generally stocky.
There is not much of a neckline, and the body is sturdy from the neck to the shoulders.
When drawing the bite, simplify the neck and shoulders as in the green line in the illustration above to make it easier to draw.

When drawing the arms and legs, it is best to draw them as thick and firm so that they can support the sturdy body.

When drawing an illustration, deform it to a certain extent while being aware of the features that I have introduced. 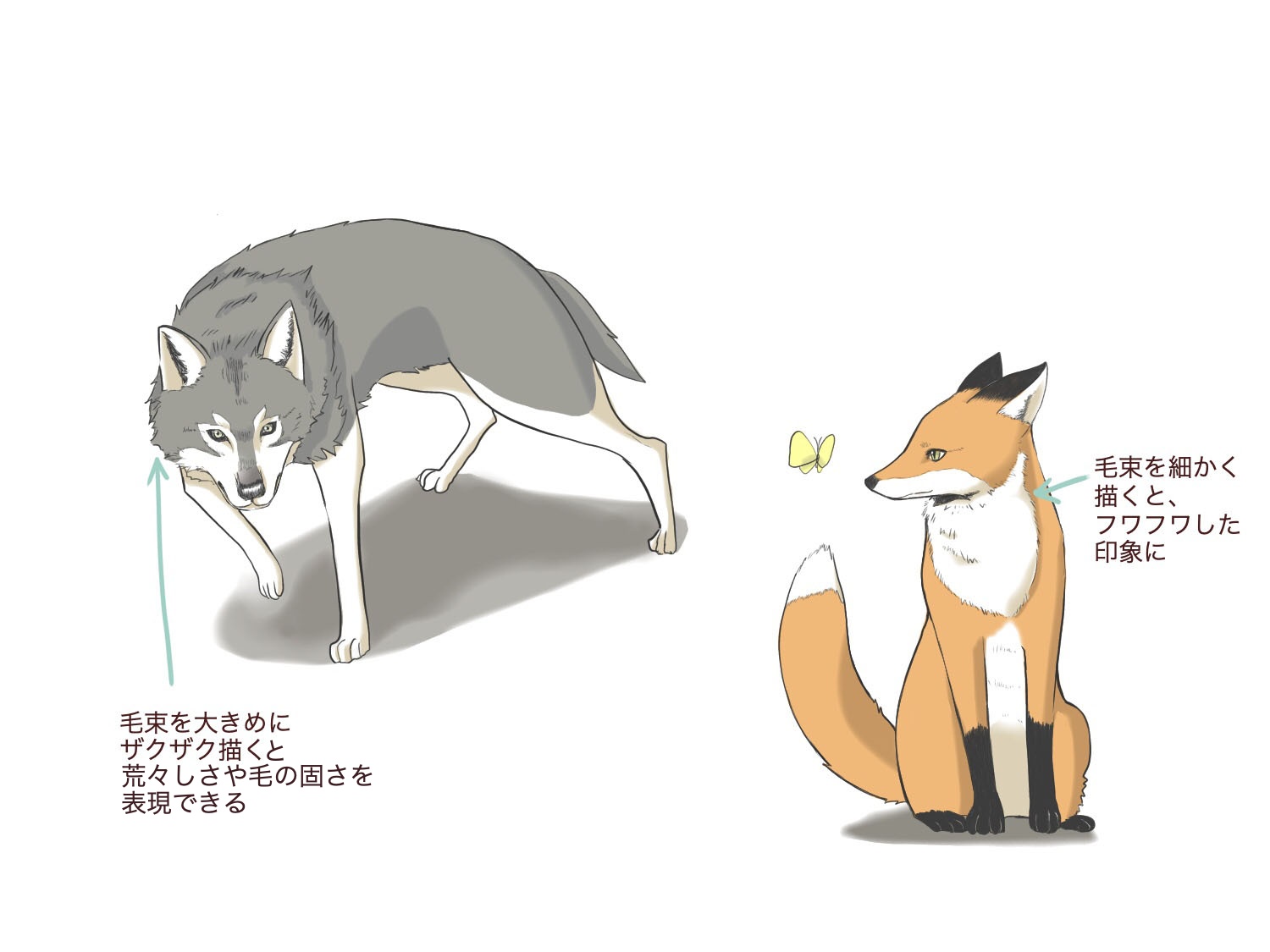