[For Beginner/Smartphone] The First Step! Let’s Do Rough Drawing. 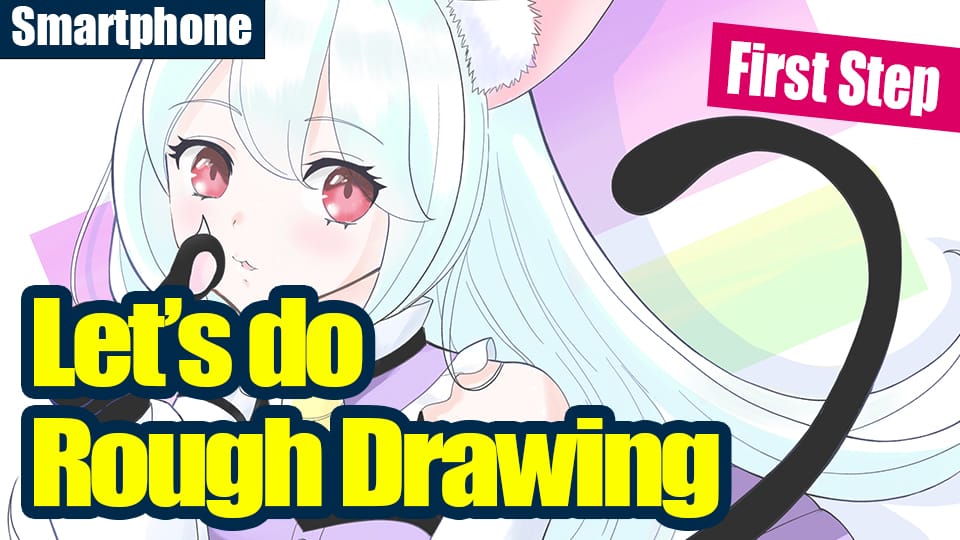 When drawing an illustration, the first thing you want to do is to draw a rough draft.

It’s true that drafting takes time, and it can be frustrating to not be able to draw the parts of the face you want to draw.

But if you draft, you will be able to draw the illustration more exactly as you want.

In this article, I would like to introduce such “drafts”, “why they make illustrations better”, and “how to draw basic drafts”.

1. Why does drawing a rough draft improve your illustration?

The advantage of drawing a rough draft is that you can adjust the balance of the composition, body, etc. well in advance.

Whether the lines are clean or dirty greatly affects the impression of the illustration.
For this reason, you want to concentrate on drawing clean lines in the clean draft.
However, if you do not draw a rough draft and just start drawing, you will not be able to

・Draw clean lines
・Adjust the composition.
・Adjusting the balance of the face and body

You have to do all three at the same time.
It is difficult to do these three things at the same time unless you are very familiar with drawing, and on the contrary, it takes a lot of time.

Drafting is the process of doing the two tasks of “adjusting the composition” and “adjusting the balance of the face and body” before the final drawing.
If you complete these two tasks first, you can concentrate on drawing clean lines in the clean writing stage. 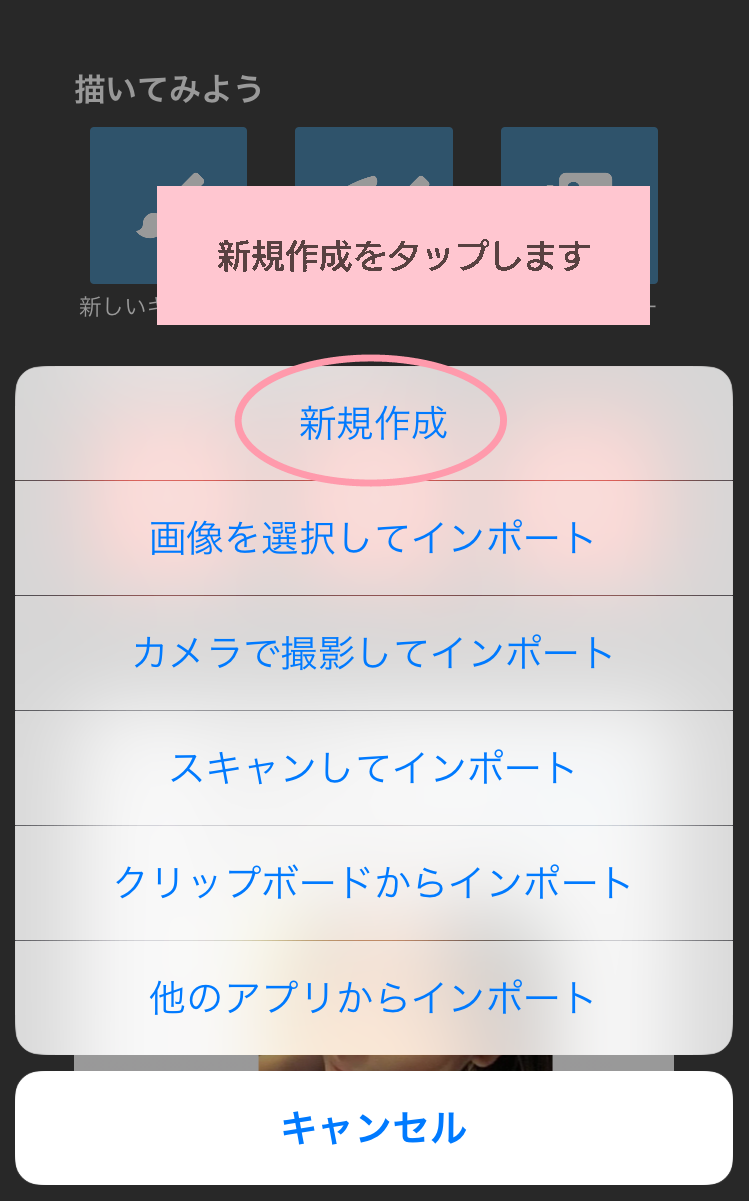 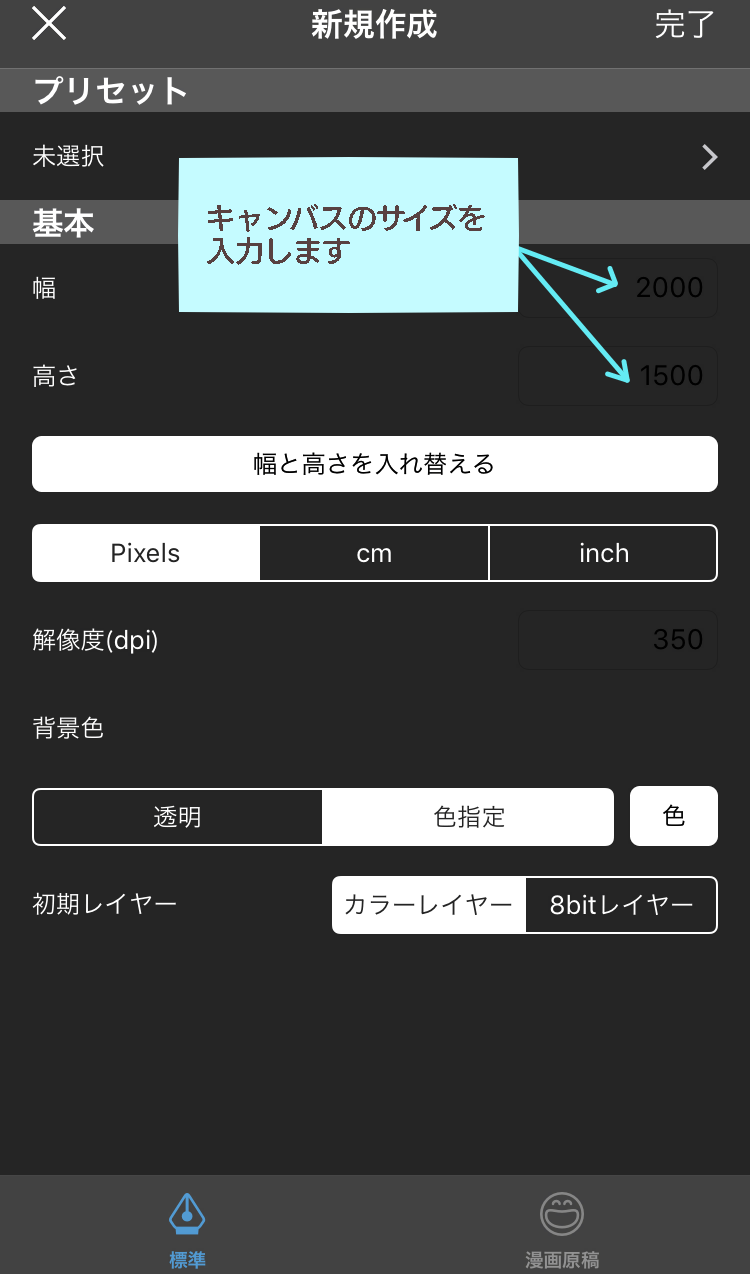 [2] Create a layer for drafting.

Once the canvas is ready, create a layer for drafting. 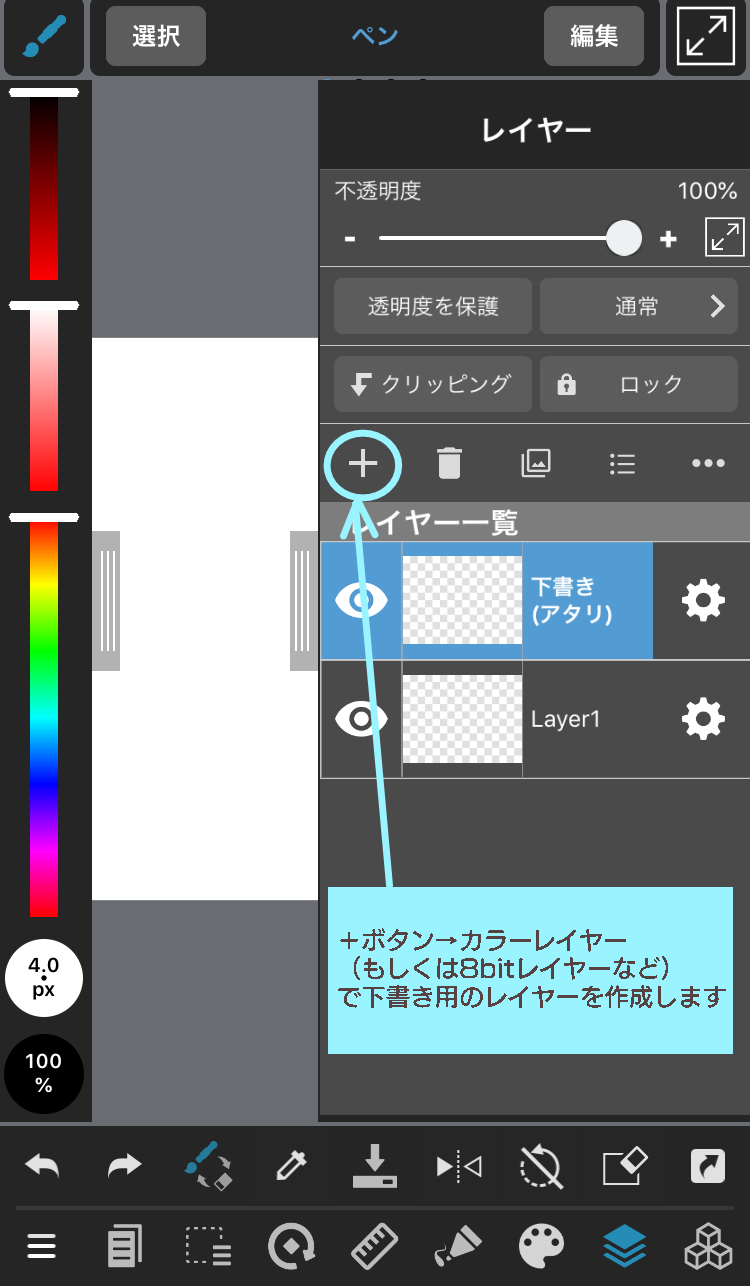 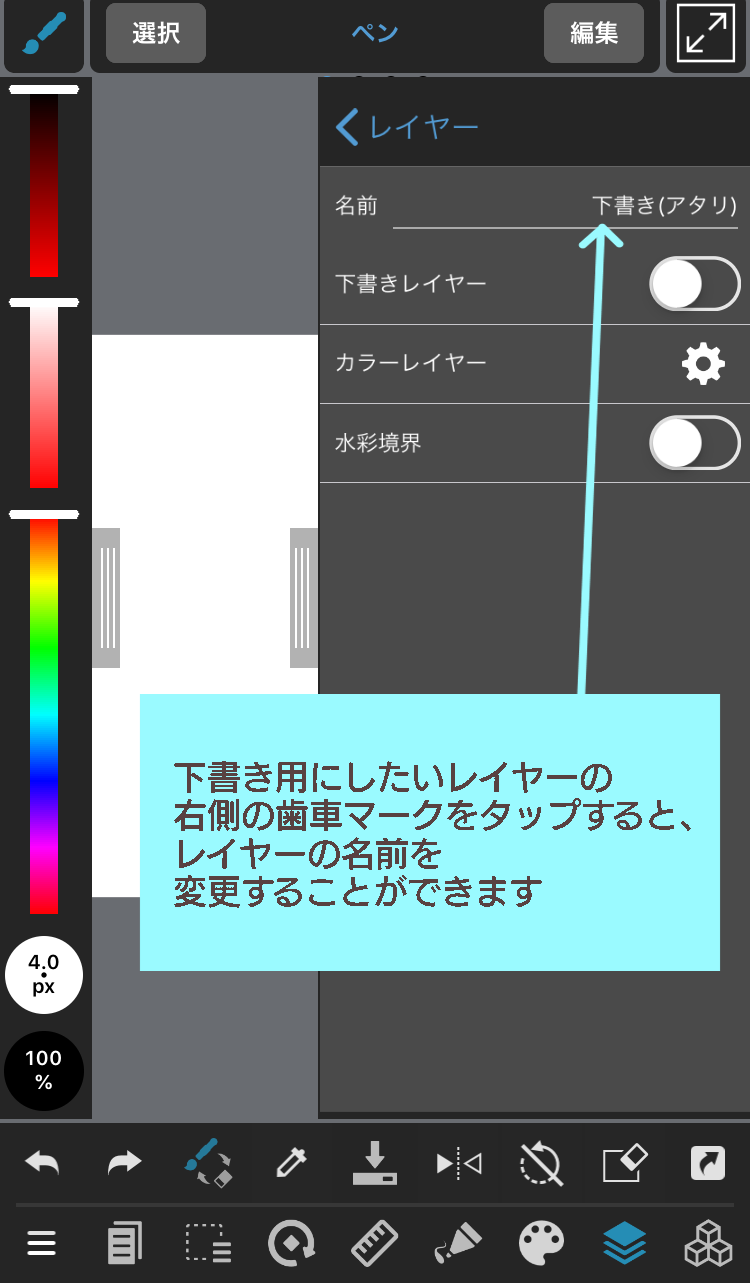 A. It is like a transparent film.
By layering these layers, you can finish the illustration.
You can make them invisible later, so please feel free to draw your drafts without worry.

Draw a rough draft on the draft layer you just created.
The way to draw a rough draft differs from person to person, but this time I would like to draw the basic drafting procedure “Atari, Rough, Draft”. 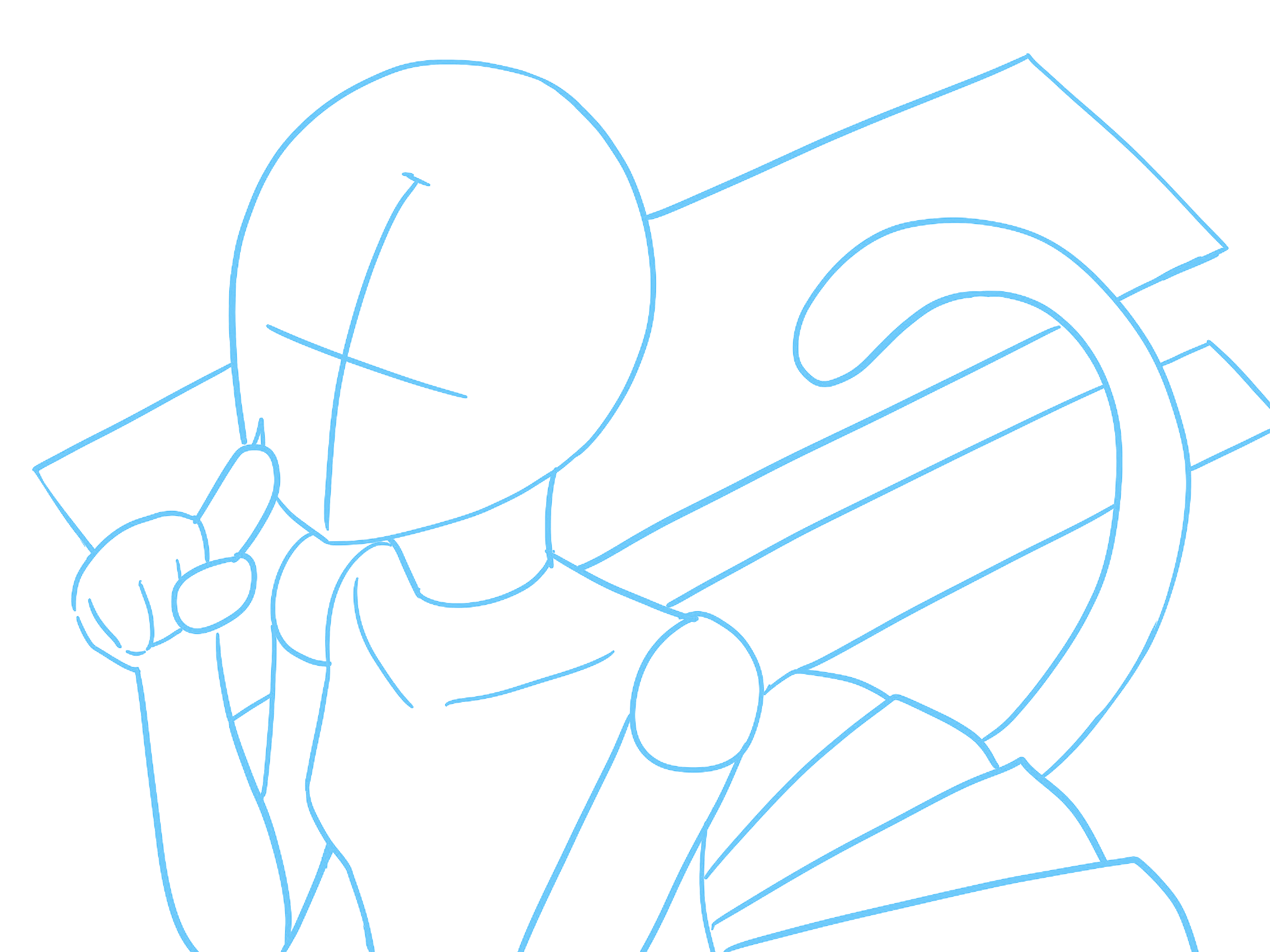 Draw a bite on the drafting layer you just created.
You can use any color you like.
Here, we will use a bright blue color to make it easier to see the rough sketch we will draw later.

This is also the process of deciding not only how to place the objects in the space, but also the balance of the body and face to some extent.
This process is often referred to as “drawing the body” as part of the procedure for drawing illustrations. 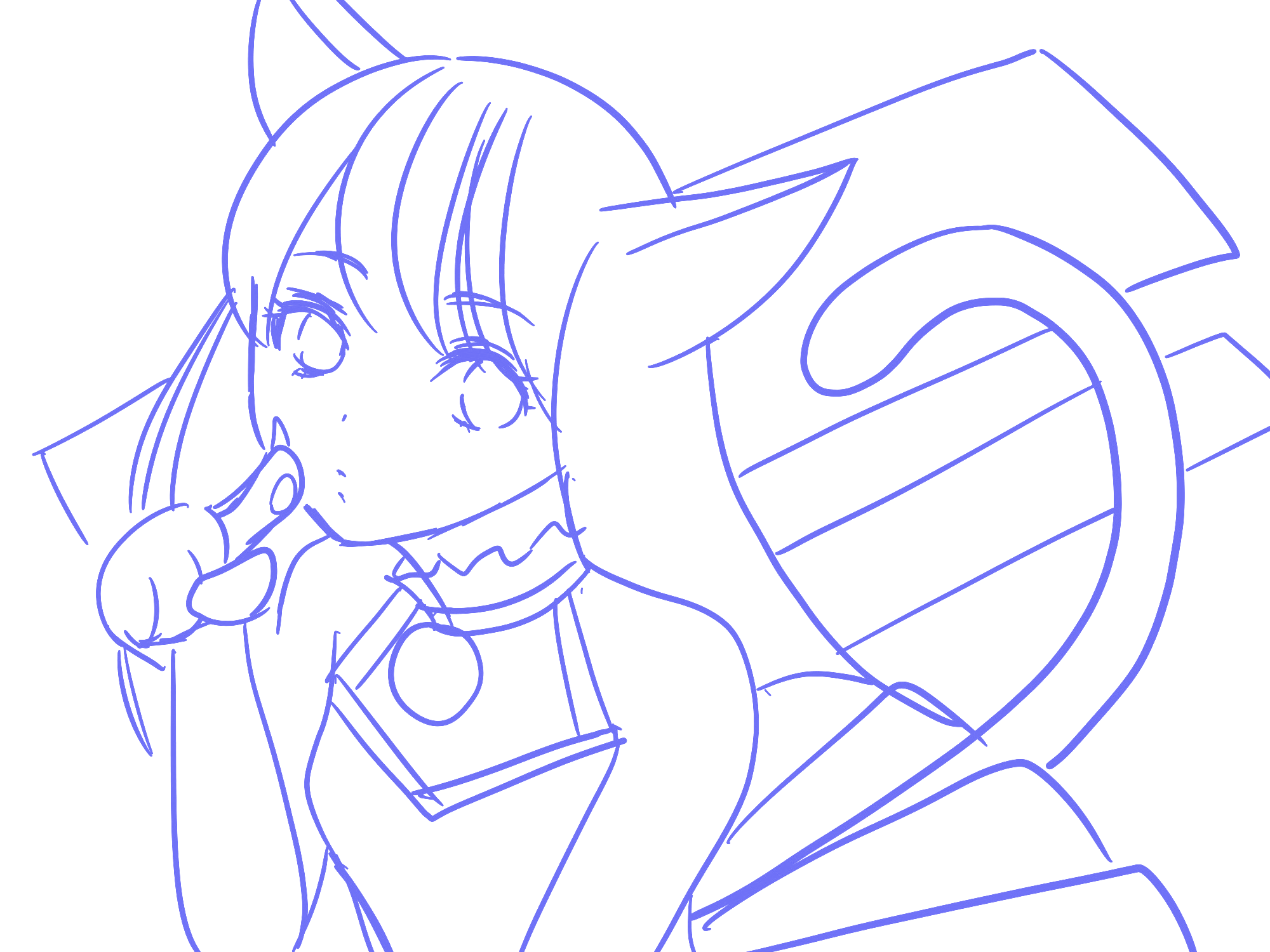 Choose a different color for the pen so that it is easy to see.
If you lower the opacity of the Atari layer, the rough lines will be more visible. 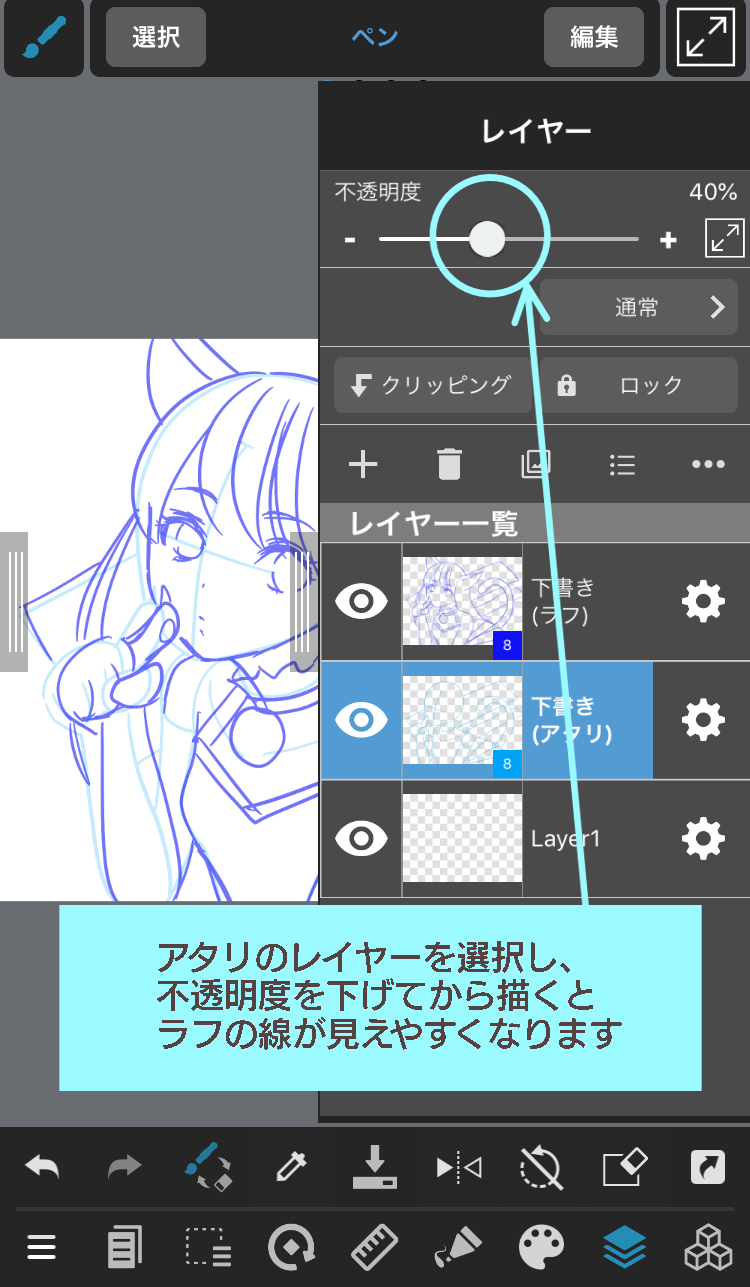 This is the step where you decide on the details of the outfit, such as the hairstyle and expression, and turn the bite into an illustration.
At this stage, there is still a high possibility that changes will be made, so we will draw it simply. 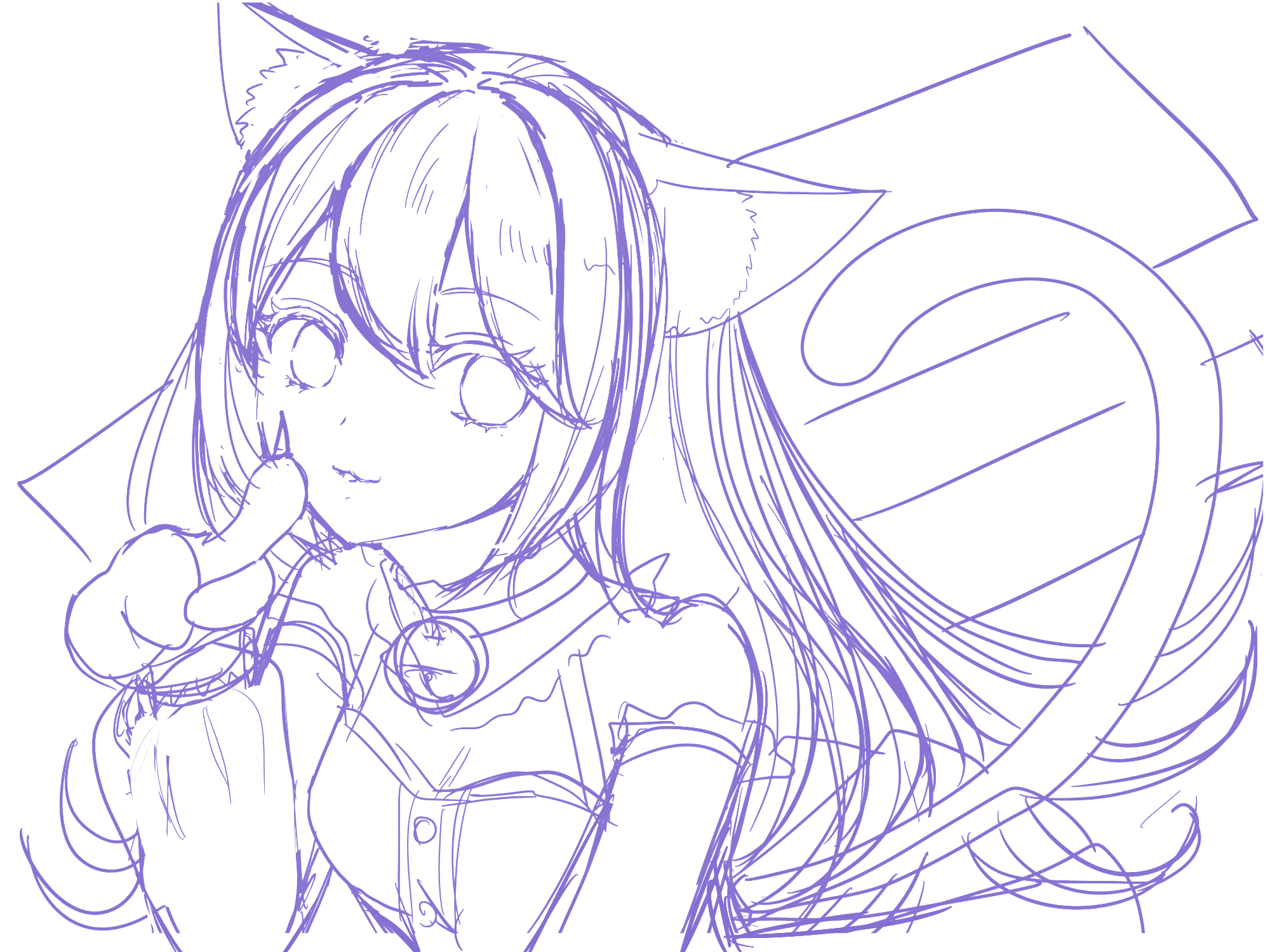 If you make the Atari layer invisible and lower the opacity of the rough layer first, you can see the lines of the rough draft clearly and draw it easily. 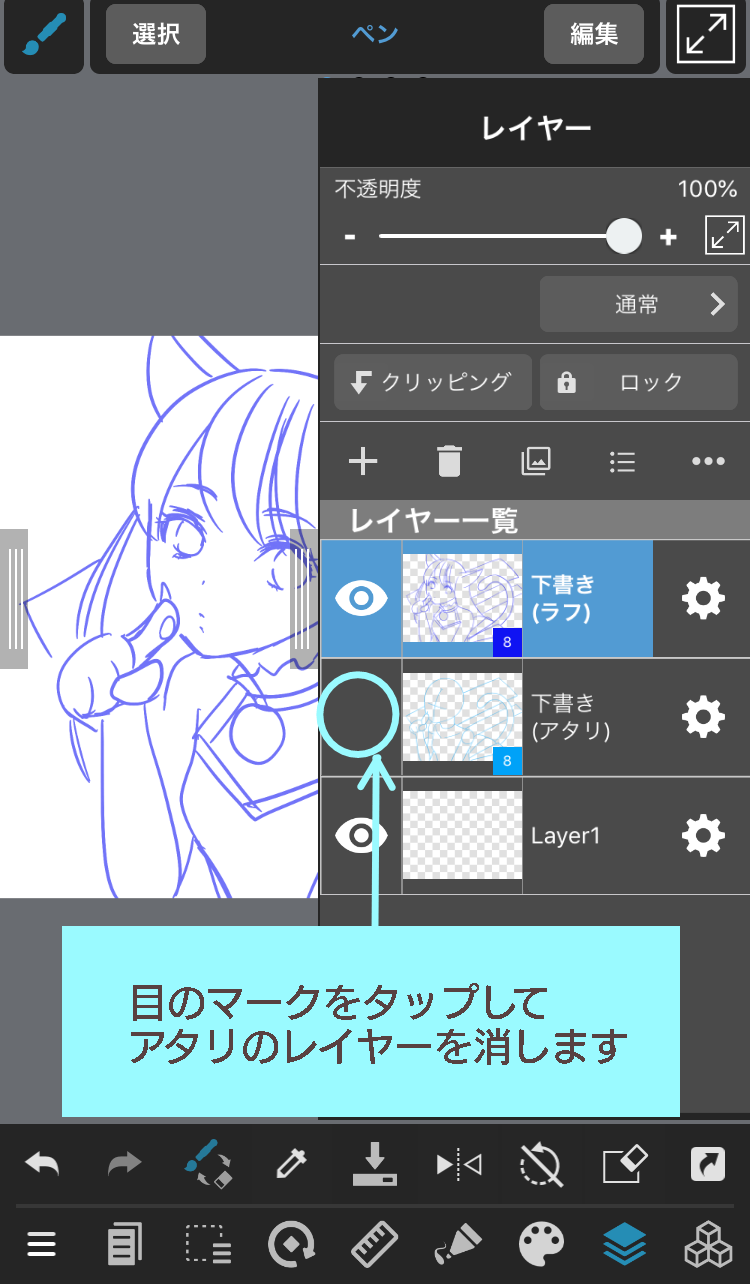 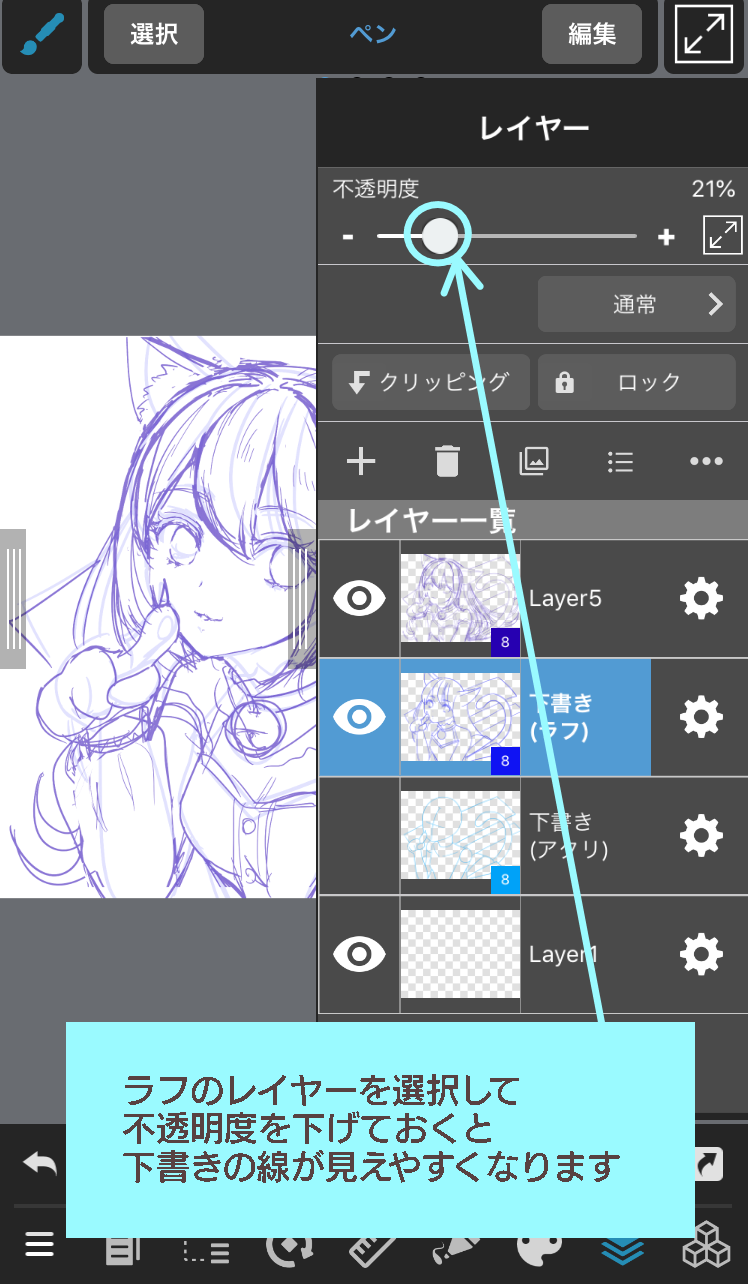 ＜What is a draft? ＞

Drafting is the process of preparing a rough, simple line drawing until it is close to a clean drawing.
If you focus on the lines you want to draw here, it will be much easier to make a clean draft.

Once the rough draft is drawn, lower the opacity of the draft layer as before, and start drawing. 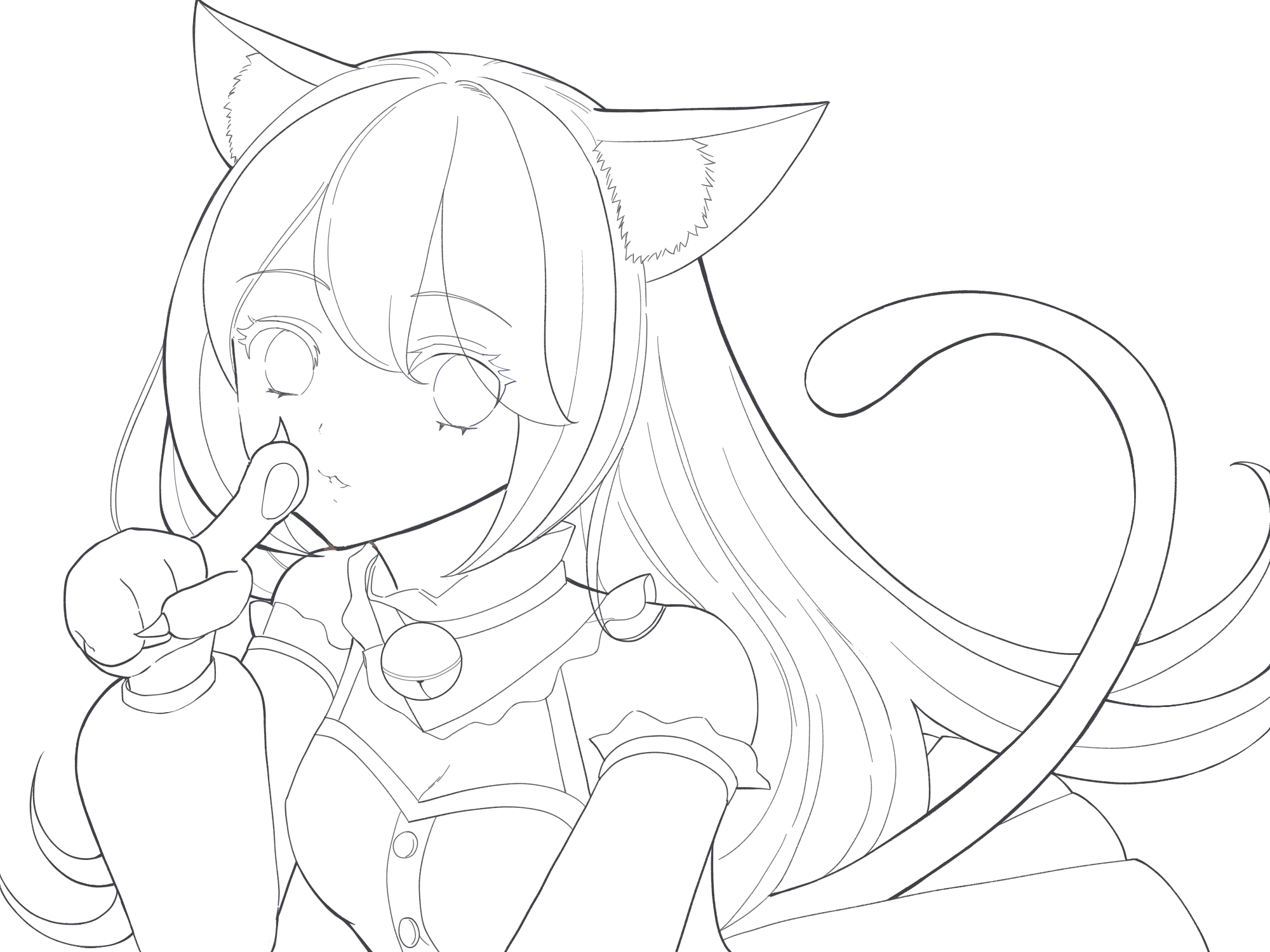 Then color it and the illustration is complete. 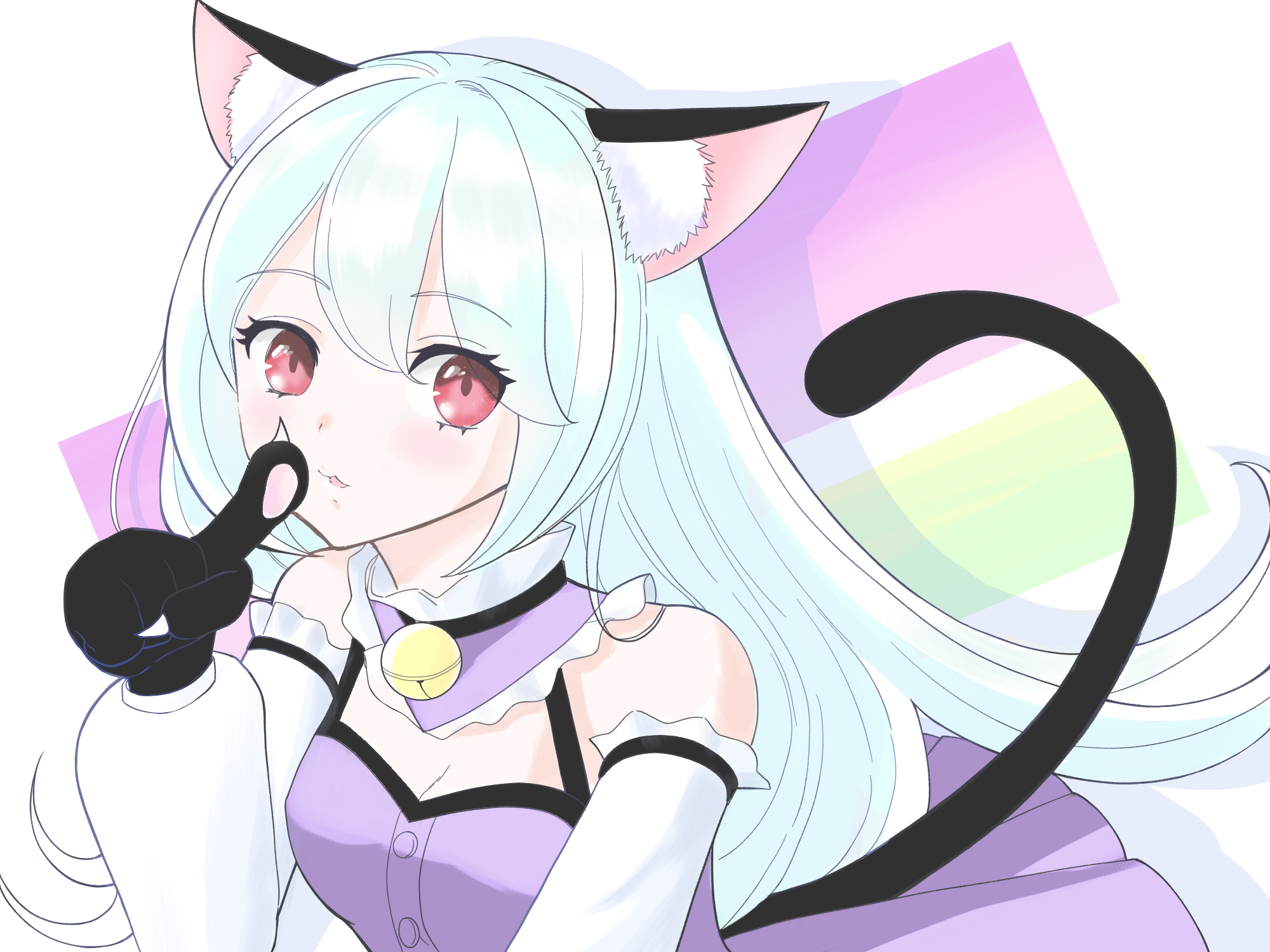 In this article, we have introduced how to draw a rough draft.
It may be a little tedious, but by drawing a good rough draft, you can prevent yourself from having to redraw it many times after you have made a clean copy.

In addition, Mediban Paint has an original drafting layer function that makes drafting smoother, so please use this function as well.

If you are just starting to draw illustrations, or if you feel that your illustrations are not going well, please try to draw a good draft.

(Text and pictures by sakaki) 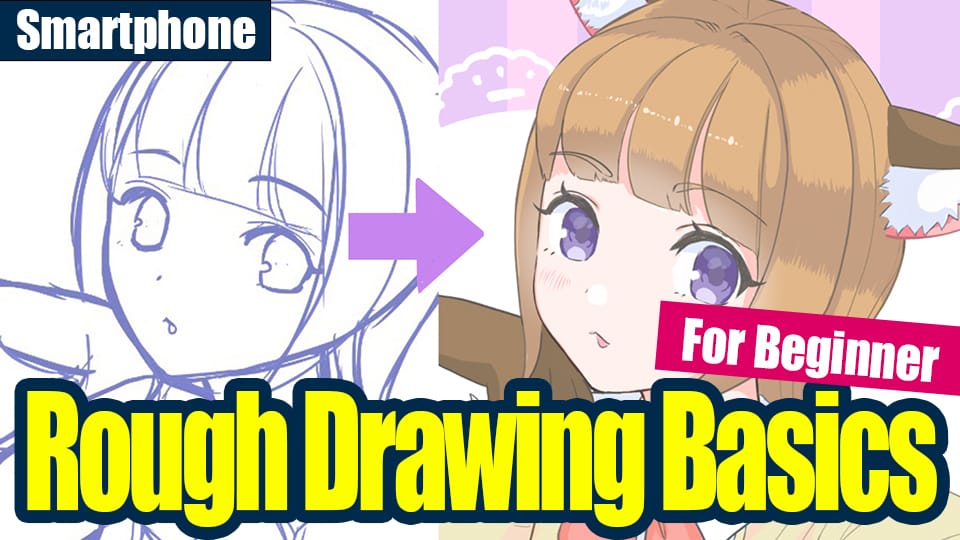 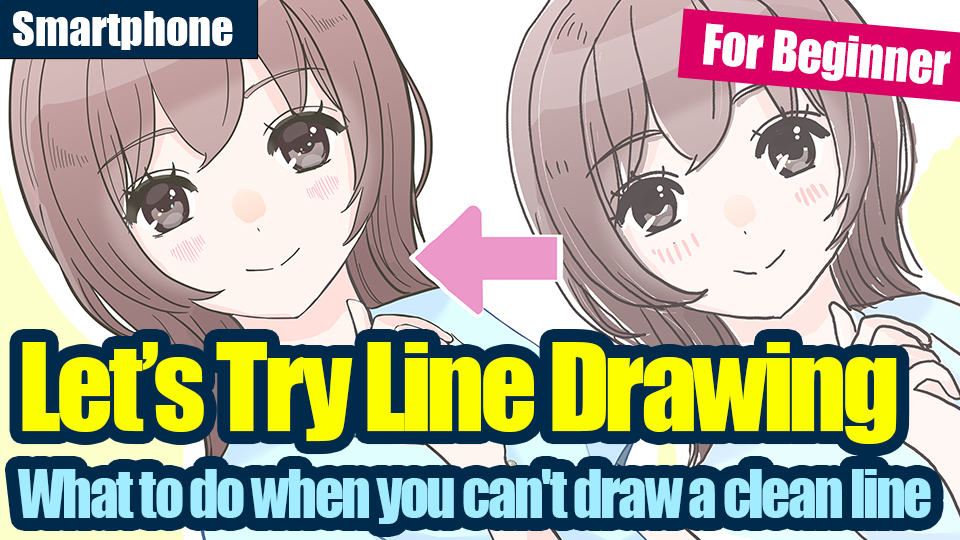 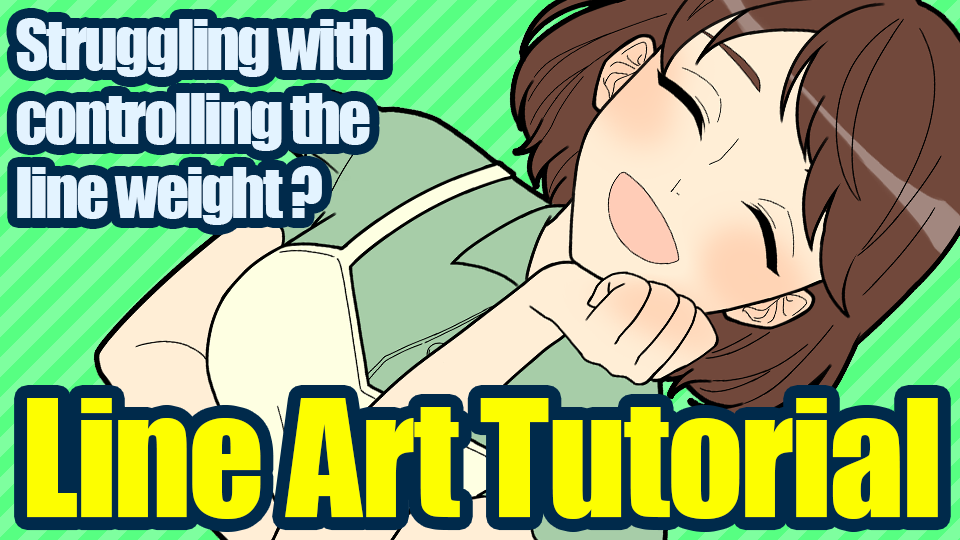 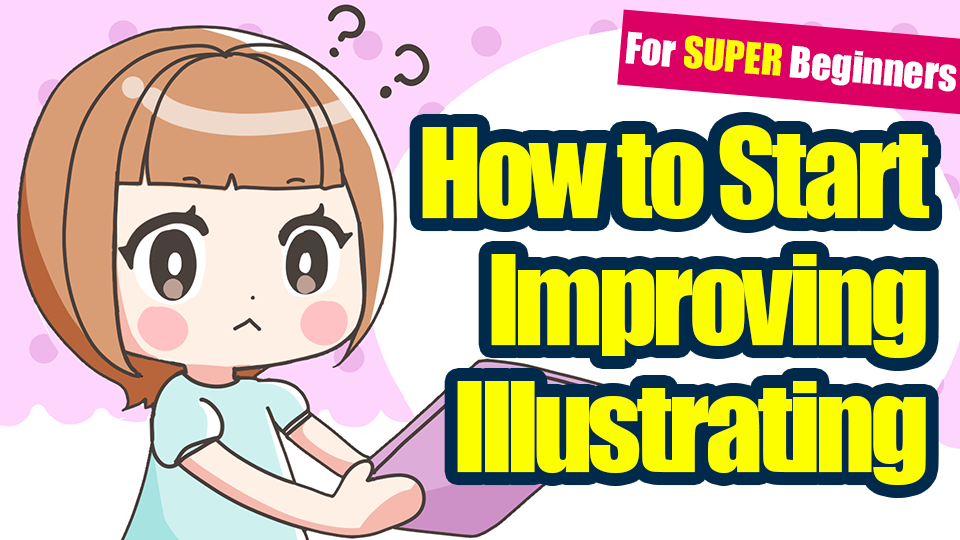 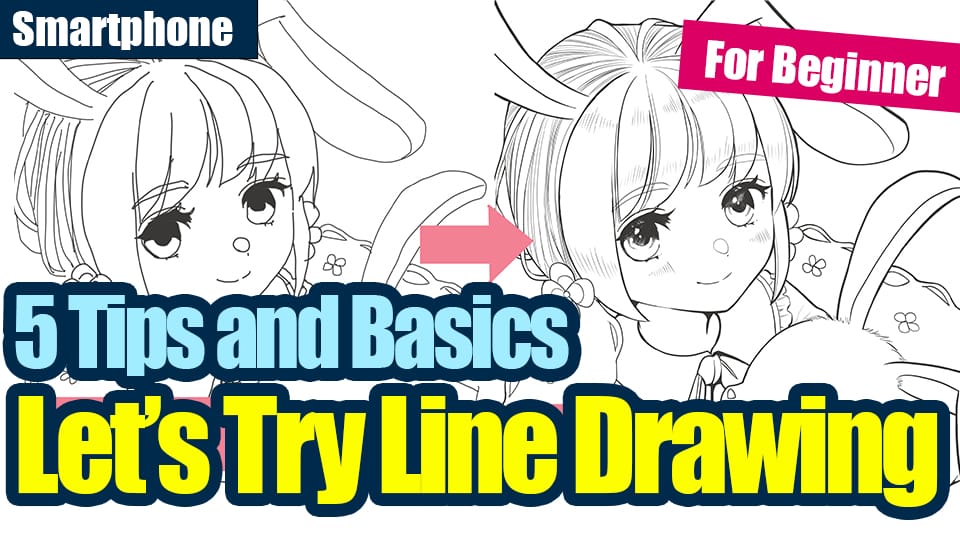 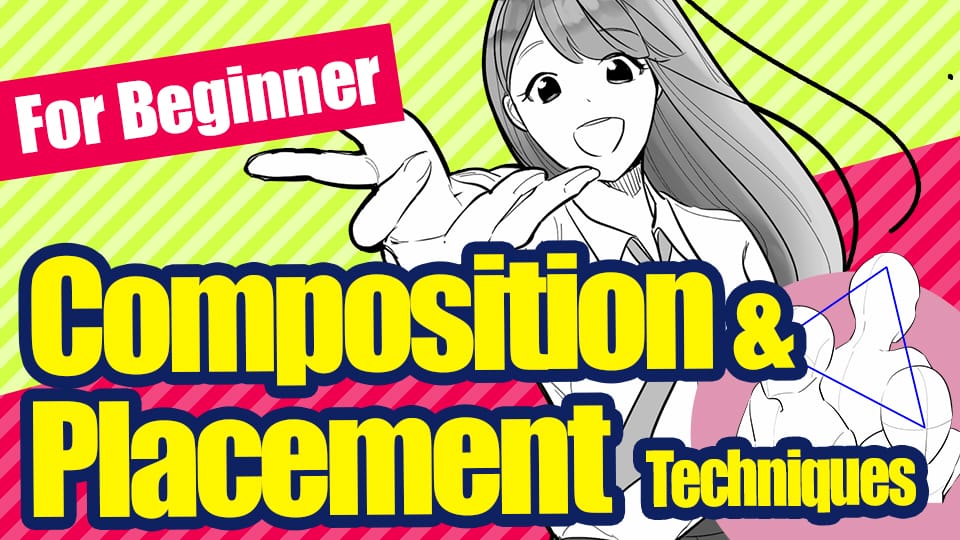