In this section, we will look at the features of “screen layers” that can be used to “finish” an illustration, and how to finish using the layer process. 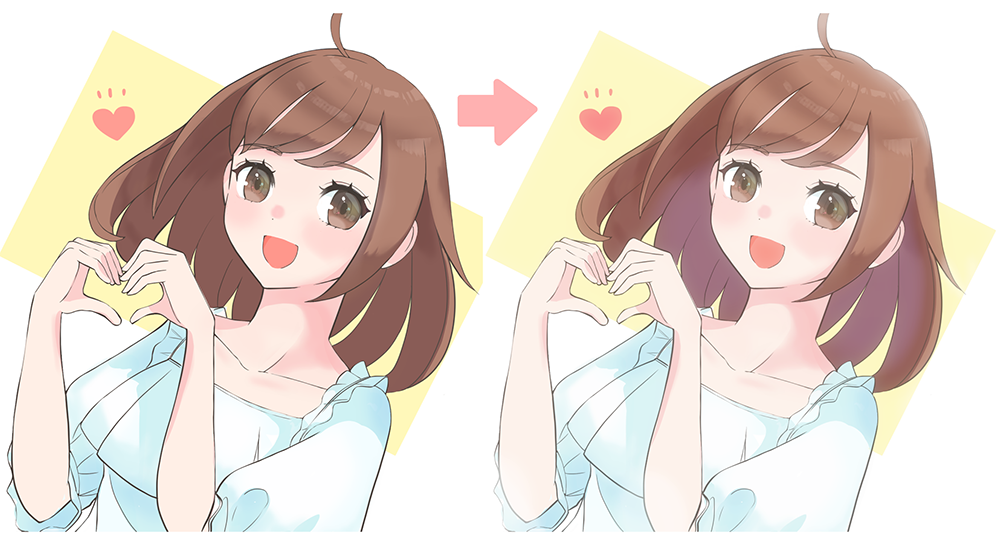 A screen layer is in the layer composition mode. 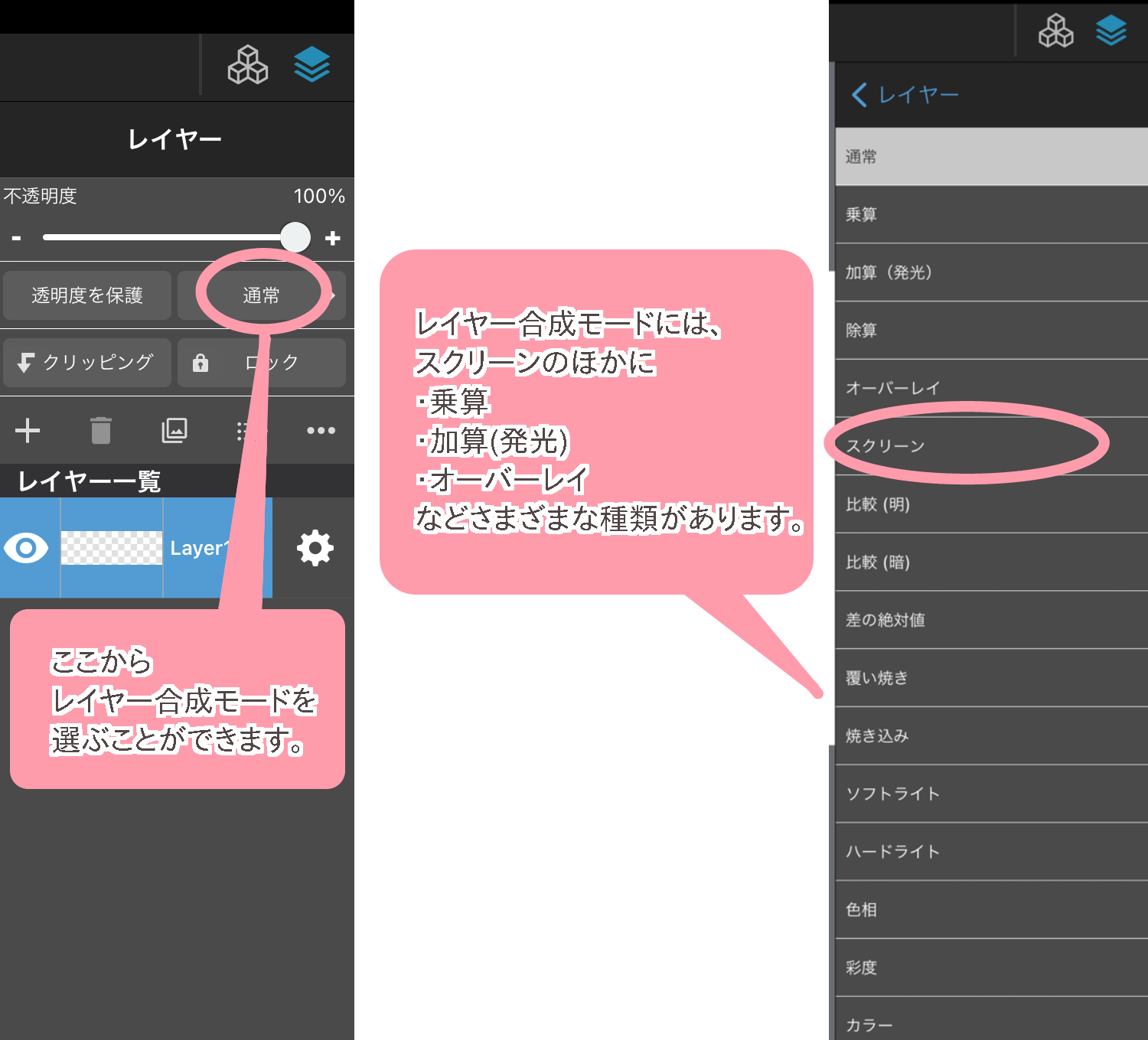 The feature of a screen layer is to make the colors of the layer look “brighter and softer”.

When you use a screen layer, the brightness is increased and the vibrancy is lowered, so it is useful when you want to create an illustration with a gentle impression, or when you want to put soft light on a character or an object. 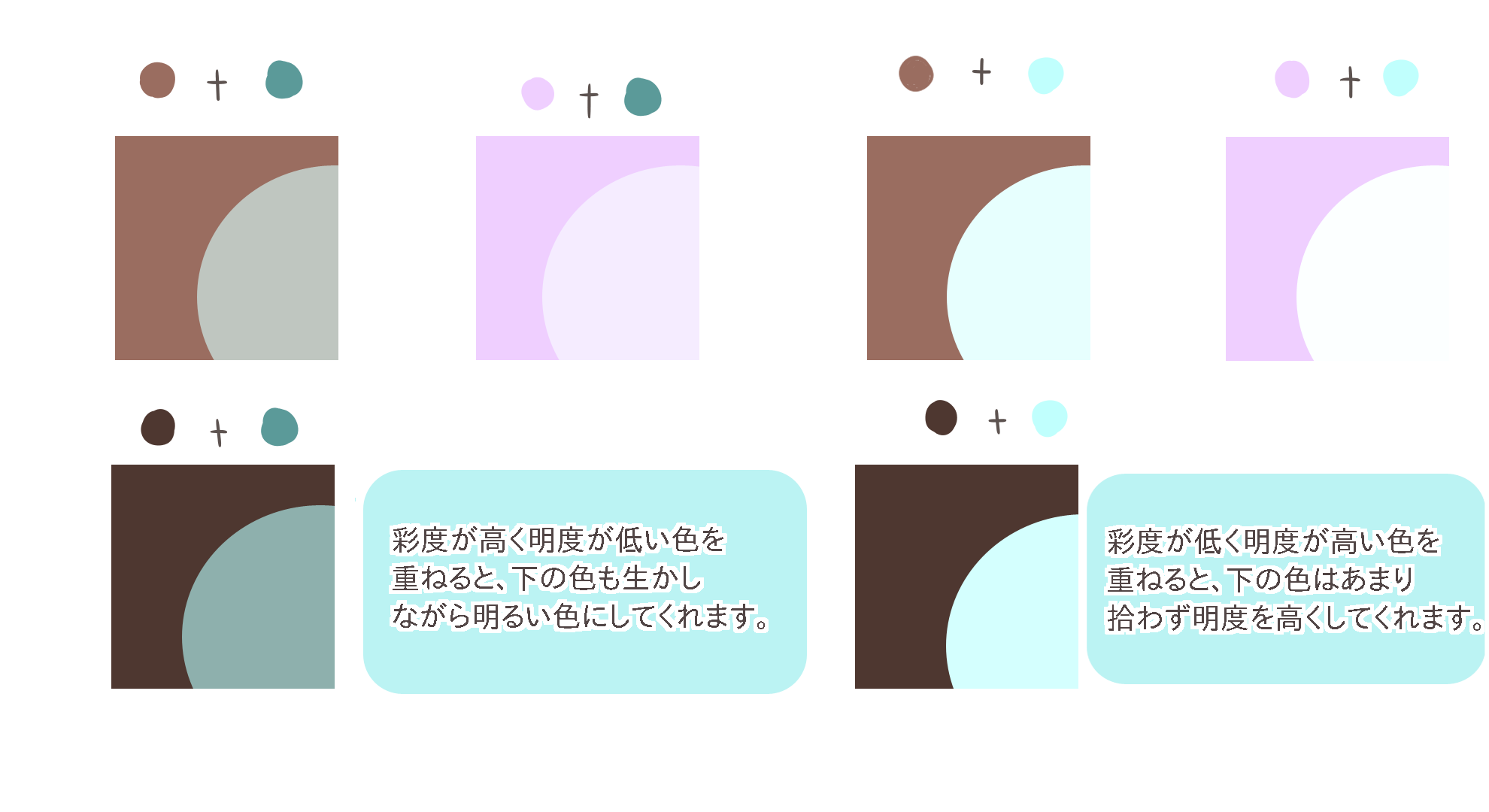 You can also use the gentle and bright impression of the screen layer to create a sense of air and perspective.

Let’s take a look at how to use screen layers for finishing.

3. How to finish (1) Create a gentle atmosphere

First of all, I would like to show you how to create a gentle atmosphere, which screen layers are good at.

① After preparing the illustration you want to process, merge all the layers to make a single image. You can customize from your layers if you want the screen to be put on the character only or including the background as well. 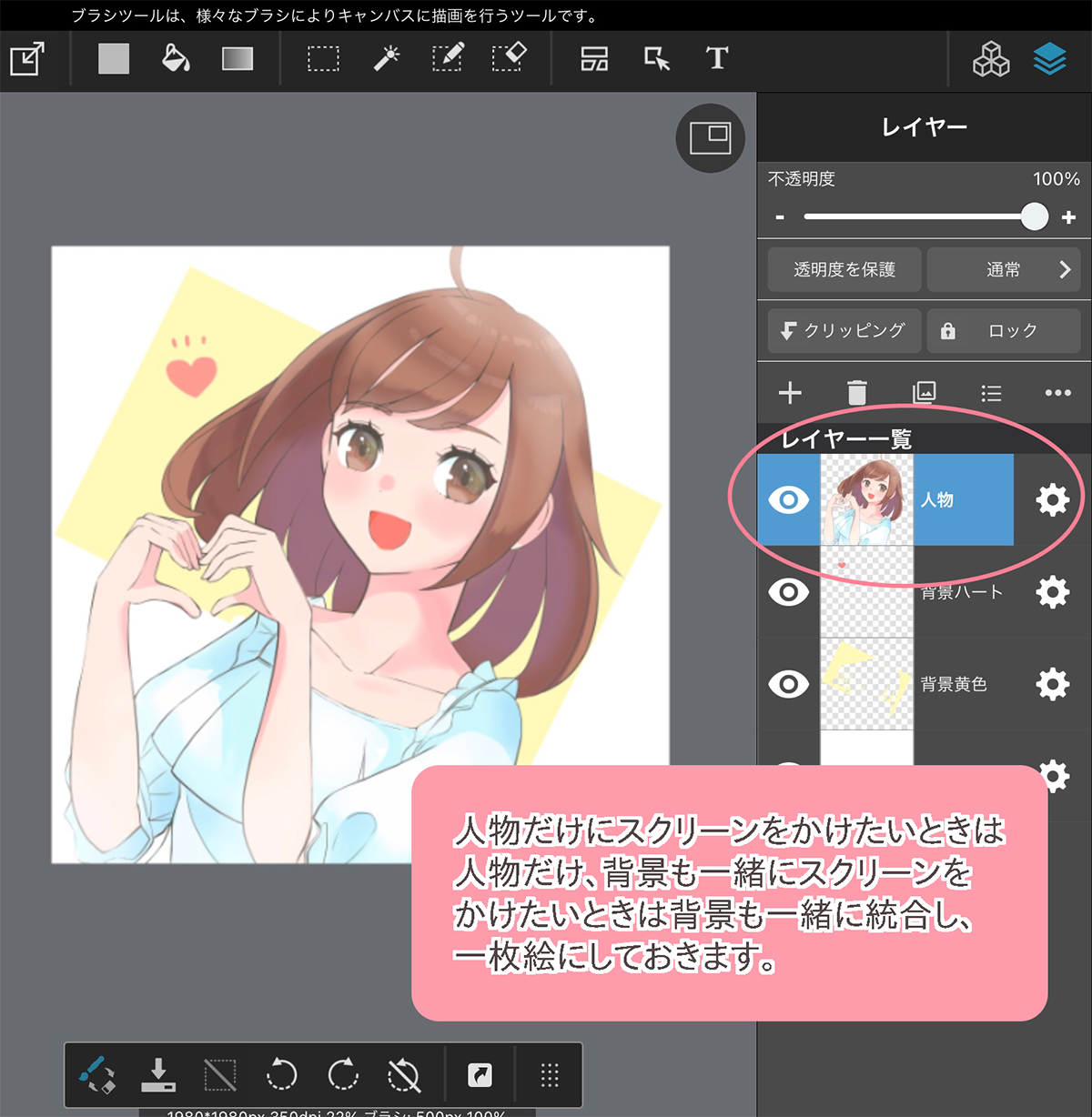 ＜OnePoint：Duplicate a layer before merging it＞
Duplicating a file before merging all the layers makes it easier when you want to start over or modify only a part of the file.
(If you have a small number of layers, duplicate the layers and lock them.)

② Duplicate the merged layer and set the layer mode to “Screen”. After that, lower the opacity and adjust the color tone to complete the image. 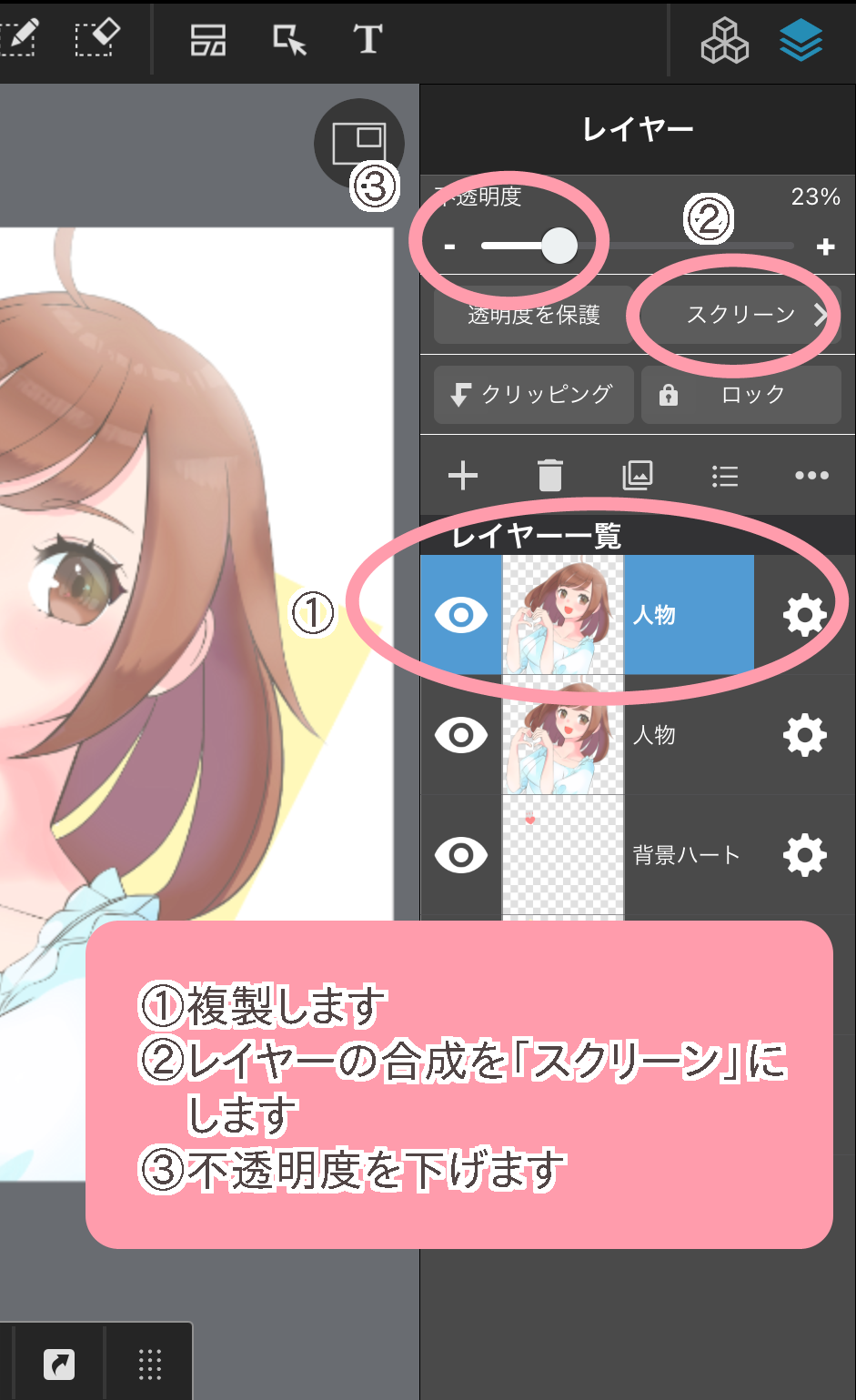 Here is a comparison of before and after screen. The right image is with screen and the left is without. 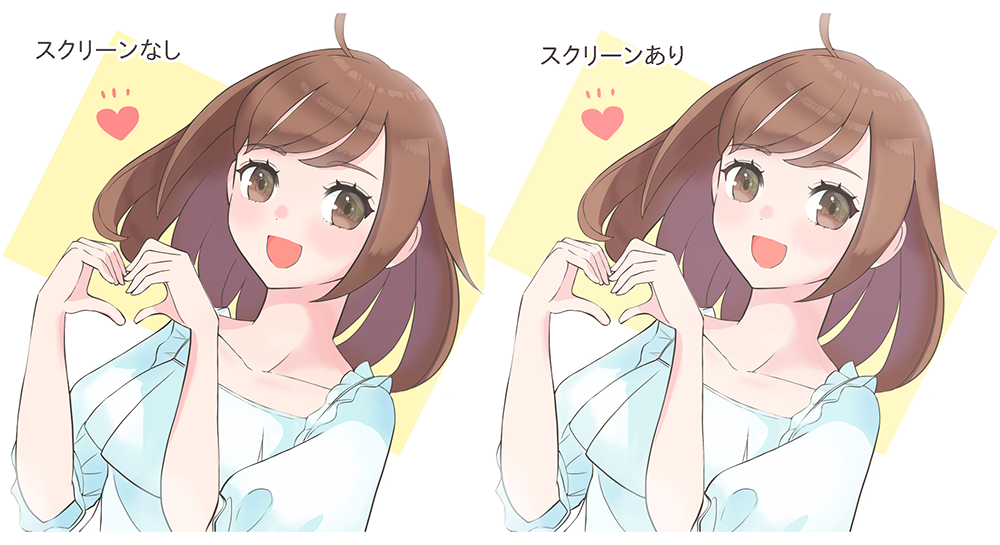 Also, if you apply Gaussian Blur to the duplicated layer in step ② and then use it as a screen layer, you can create a soft, luminous, gentle atmosphere. The Gaussian Blur is used on the image on the right. 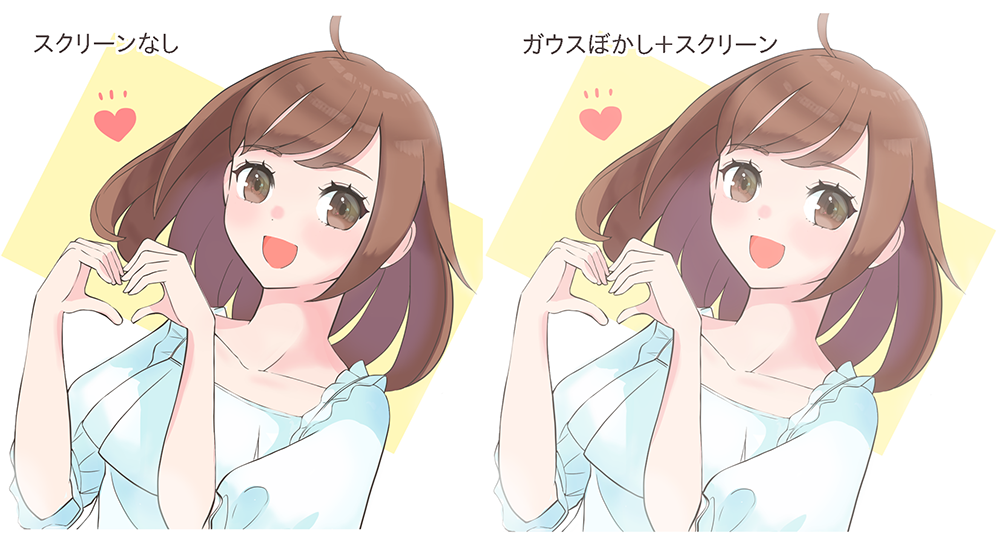 In addition, by combining a screen layer with a few steps, you can create an illustration that looks like the skin is softly glowing.
This technique is called the “glow effect”. 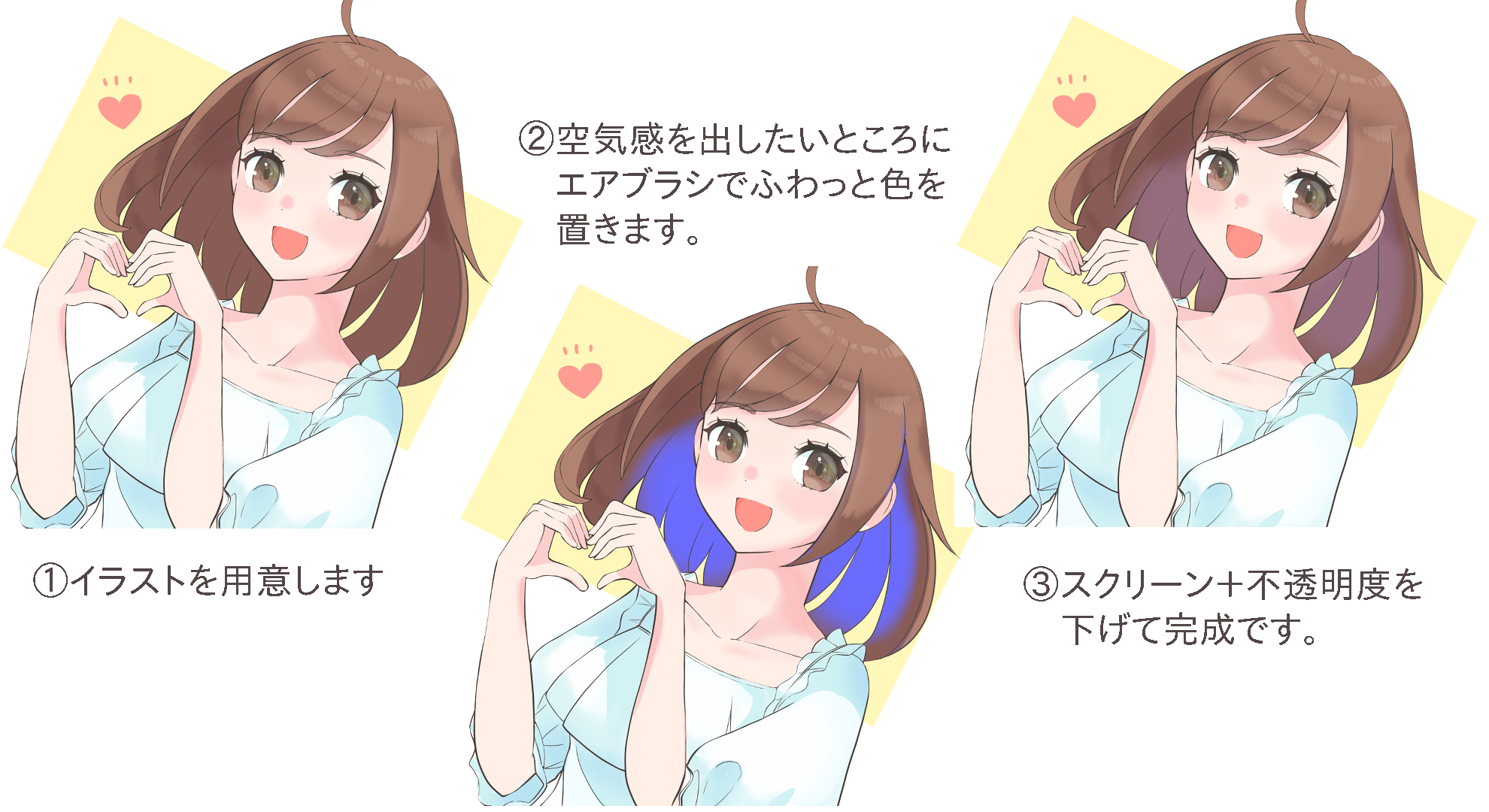 ① Prepare your illustration.
② Create a new layer and use the Airbrush to paint softly, as if you were painting the air between “what’s in front” and “what’s behind”.
③ Set the layer composition mode to “Screen”. Adjust the opacity and you are finished.

This finishing method can be used for hair as well as backgrounds.

A screen layer can also be used as a soft highlight. 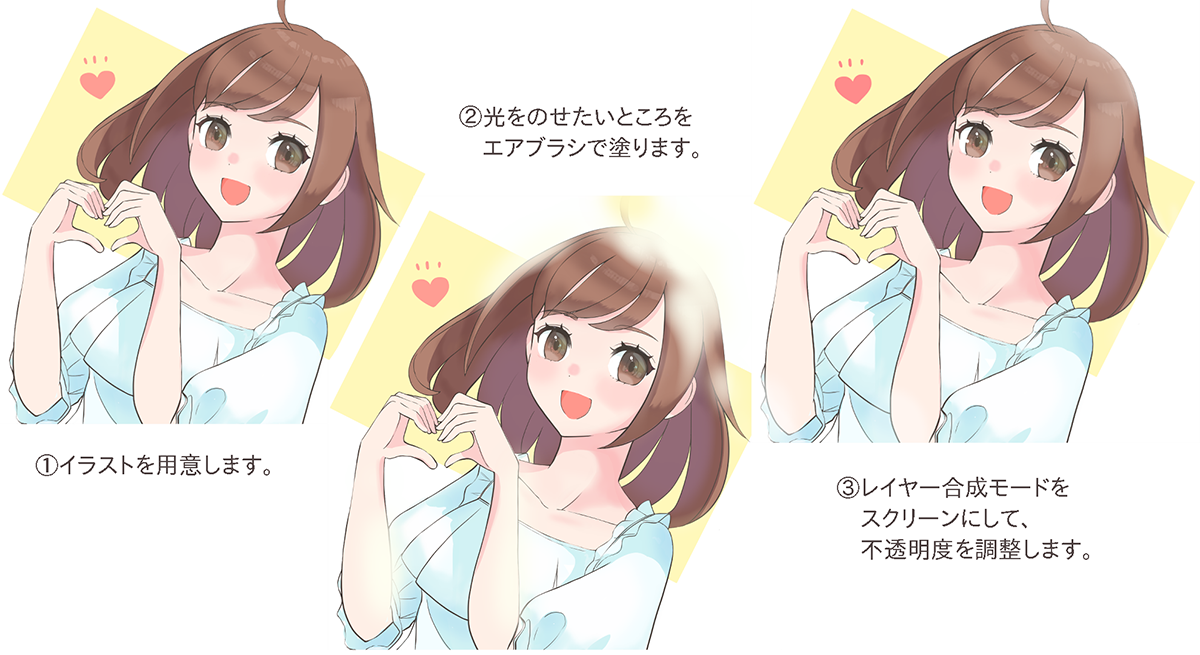 ① Create a new layer for the screen layer.
② Paint white with the Airbrush where you want the light to appear.
③ Set the layer blend to “Screen” and adjust the opacity.

In addition to this kind of highlighting, it is also recommended to add soft colors to the edges of hair and parts.

There are many other ways to use the screen, so be sure to give it a try.

(Text and pictures by Sakaki)