How to draw a handsome boy’s face 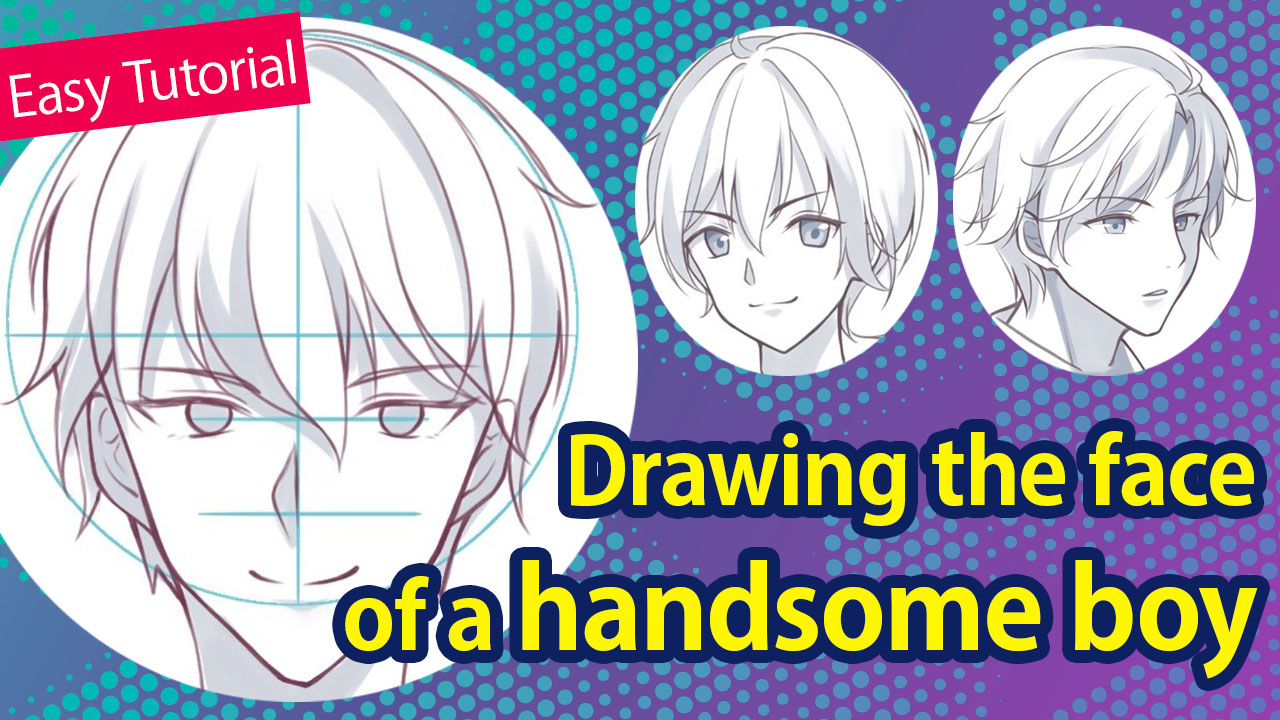 I’m really happy to hear that my previous tutorial “How YOU can draw a girl’s face in a cute way” got a lot of views with great reaction!

Thank you for the support.

In this article, I will be introducing how to draw a boy’s face, as a sequel to the last tutorial.

But, as I explained in the girl version, you will be able to draw a handsome male character once you grasp the key features.

I’m sure some of you struggle to differentiate your drawing style between male and female characters so I will be covering the key differences and important tips you should know! 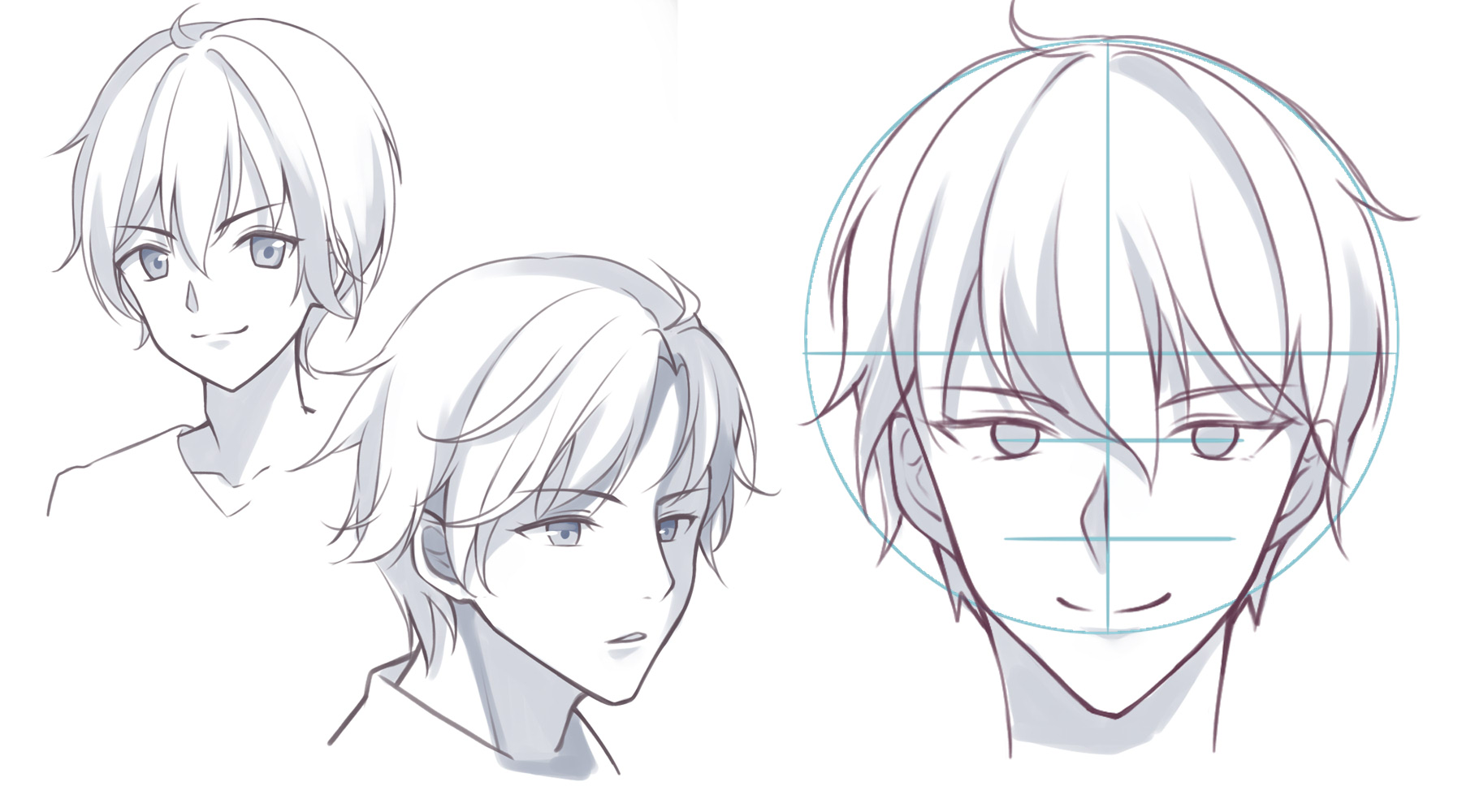 For male characters, straight lines are often used to portray the sharp facial outline, unlike female characters drawn with a soft atmosphere.

I highlighted in the previous tutorial that female faces are generally round.

You should remember that male characters are the opposite, their faces are “sharp and squared”.

Just like the previous article, I will start from a single circle!

This doesn’t have to be a perfect circle but if you cannot draw a clean circle, use the Fill Tool and the Select Tool.

Draw a cross inside the circle.

For a regular front face, divide the circle into four parts.

You should remember to leave some extra space below the circle since the face of a male character will not fit inside the circle, unlike the female face.

You can decide on the height of the facial parts to fit your liking but I usually divide it into three sections. 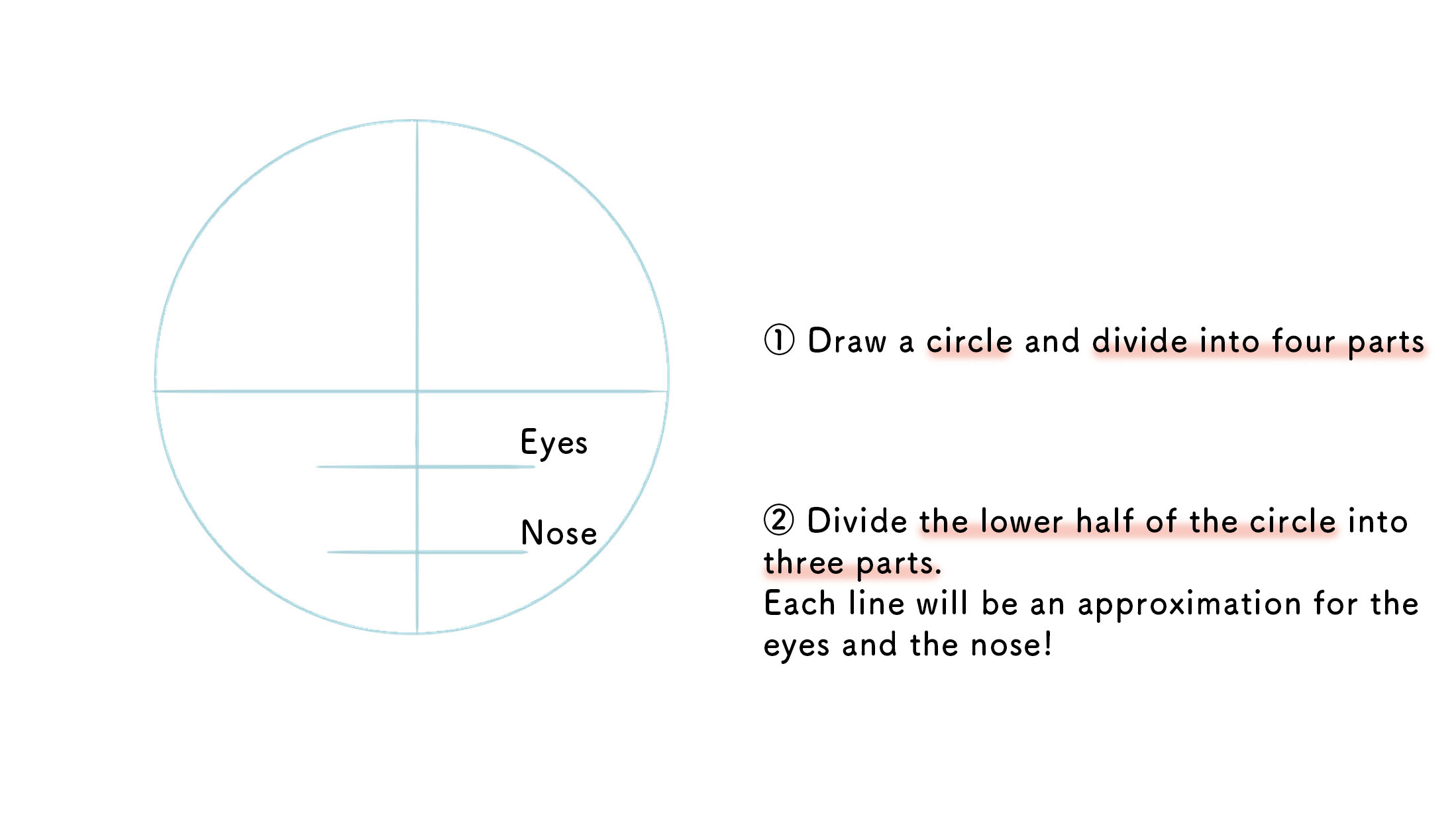 I will then draw the facial outline.

The key point here is to draw the facial outline with smooth, nearly straight lines.

You can also draw with completely straight lines but I don’t draw with edges since I personally want to keep the face realistic even behind the sharp impression.

I paid attention to connecting the lines smoothly around the jawline too.

If you want to draw a cute boy, you can draw a circular outline, just like how a girl’s face is drawn. 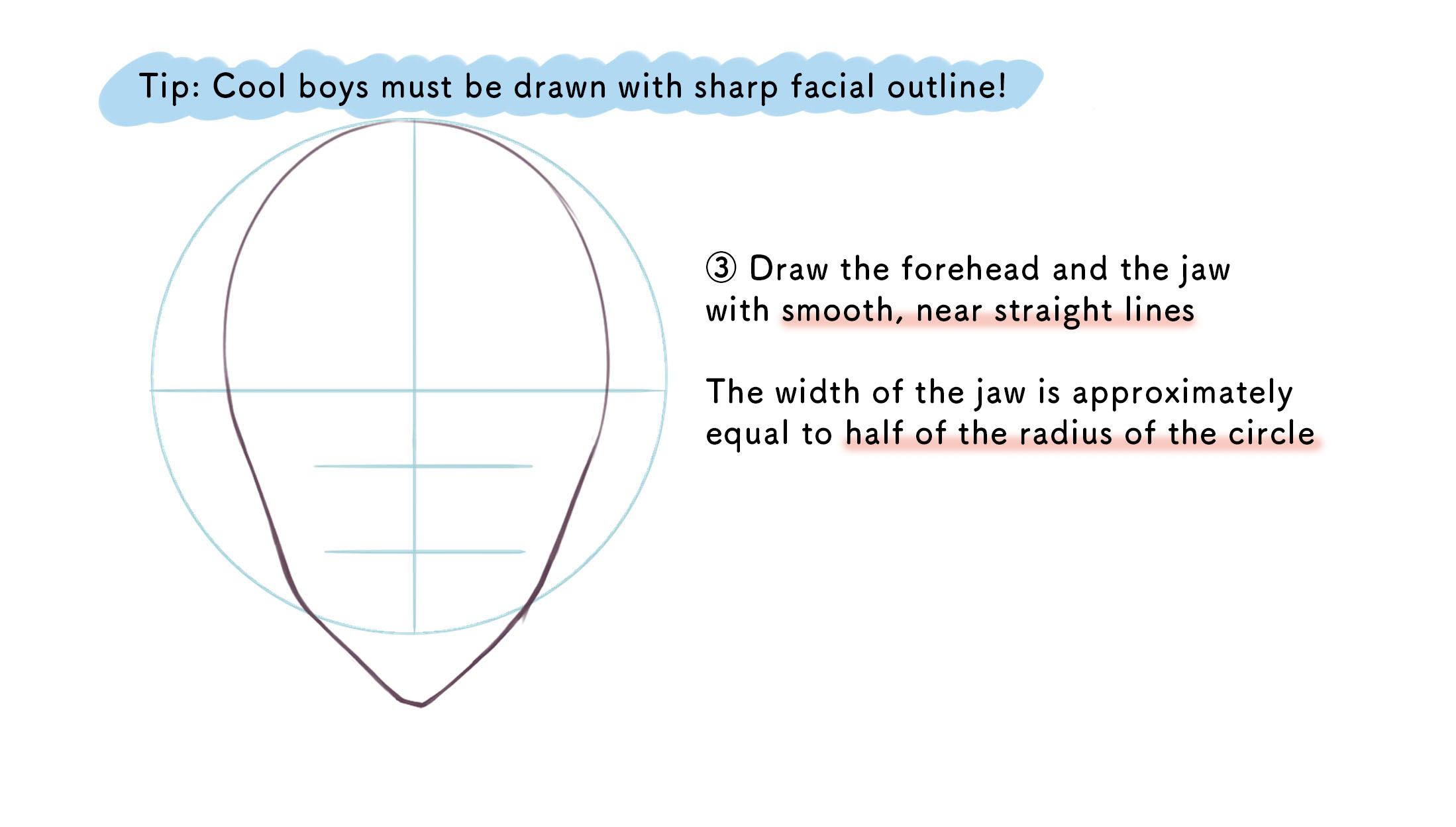 I will draw the main facial parts now.

Position each part around the approximation you made earlier.

There are various shapes to the eyes. While female characters are drawn with round eyes based on shapes without corners like circles or ovals, the masculine feature is highlighted by how the eyes are drawn based on angled shapes like triangles or trapezoids.

Additionally, eyelashes must be thinner for male characters.

The character will look mature if you draw with small eyes.

On the other hand, large circular eyes will make the character look cute.

I also try to keep the distance between the eyebrows and the eyes very narrow (for males).

This is done to portray the sharp atmosphere as well.

As for the nose, I will lengthen the nose line with the center drawn on the approximation line, unlike the dot nose I drew for a girl’s face.

You can also make it long enough to reach the eyebrow line.

This is because male characters must be drawn with more realistic features.

The last part is the mouth. I drew it inside the circle as well.

Remember that the closer the parts to the center, the more childlike the character will be. Adjust the position of facial parts to fit the type of character you want to make. 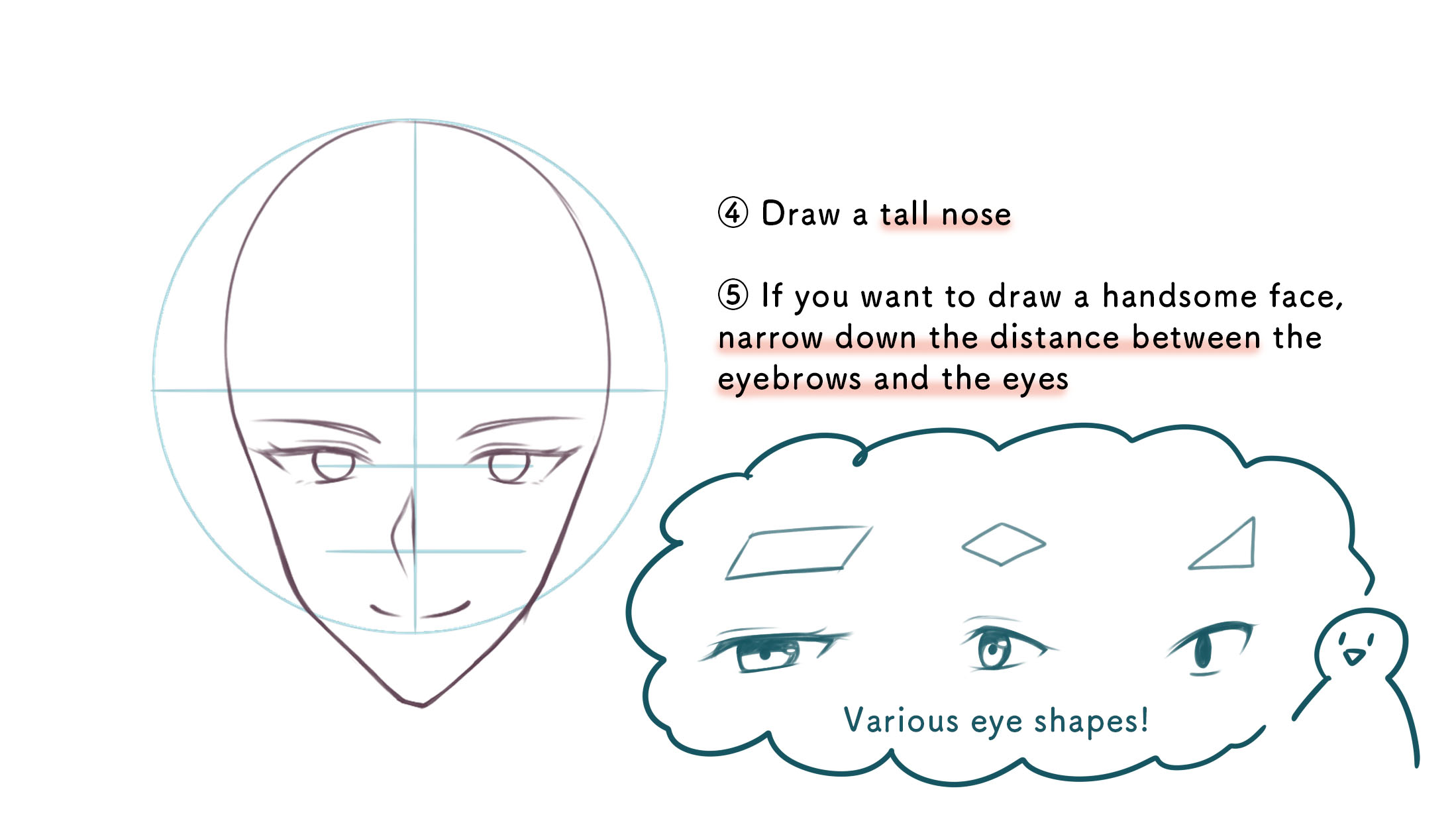 Let’s draw the ears and the neck.

The ears must be drawn right next to the eyes.

Since I want the neck to be drawn with thick lines, I extended the neckline from the corners of the jawline. 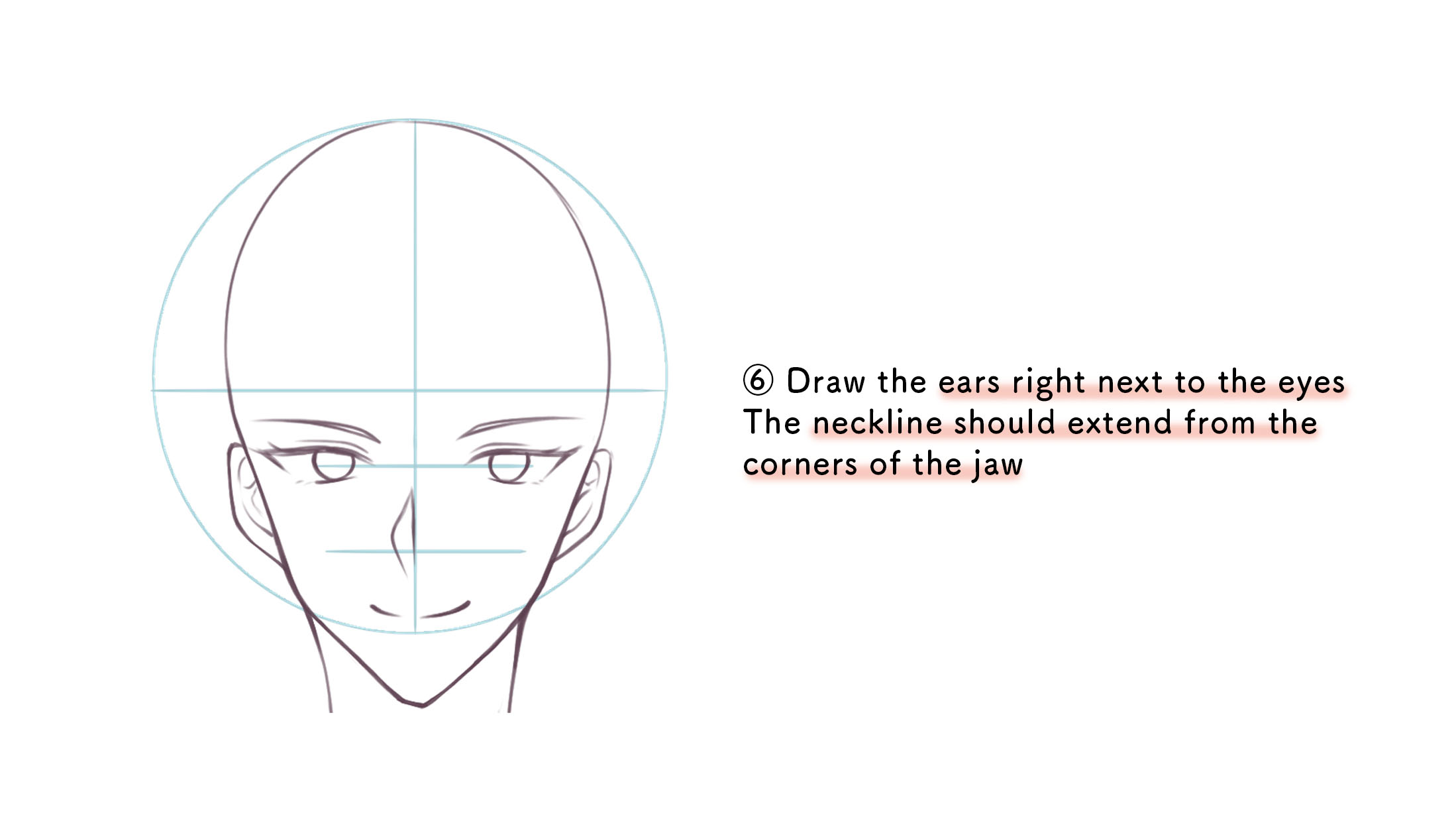 Keep in mind that “all the hair grows from a single point at the top of the head”.

This is the same as I explained for female characters but males are mostly drawn with short hair so the shape will look fairly inconsistent. 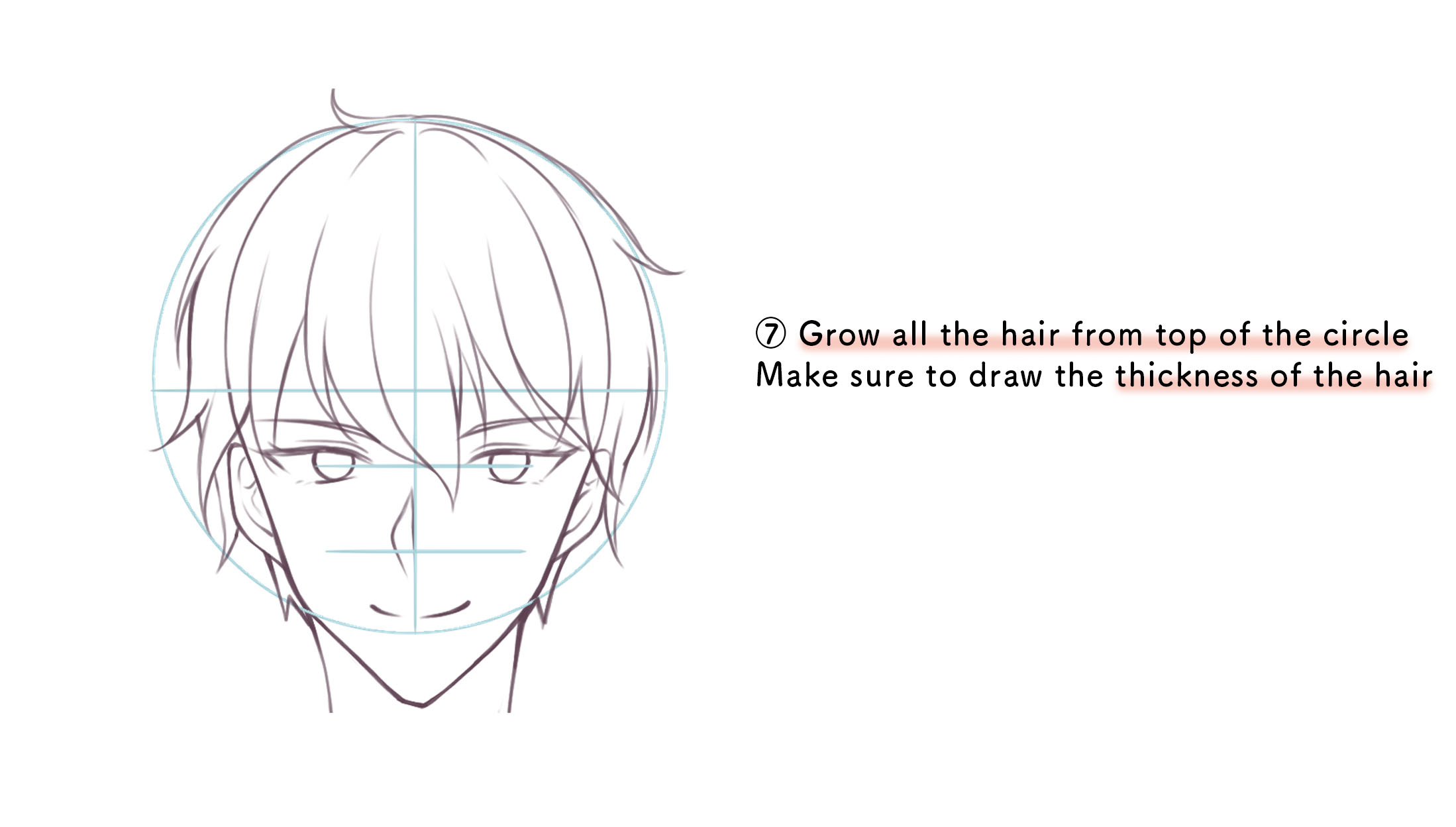 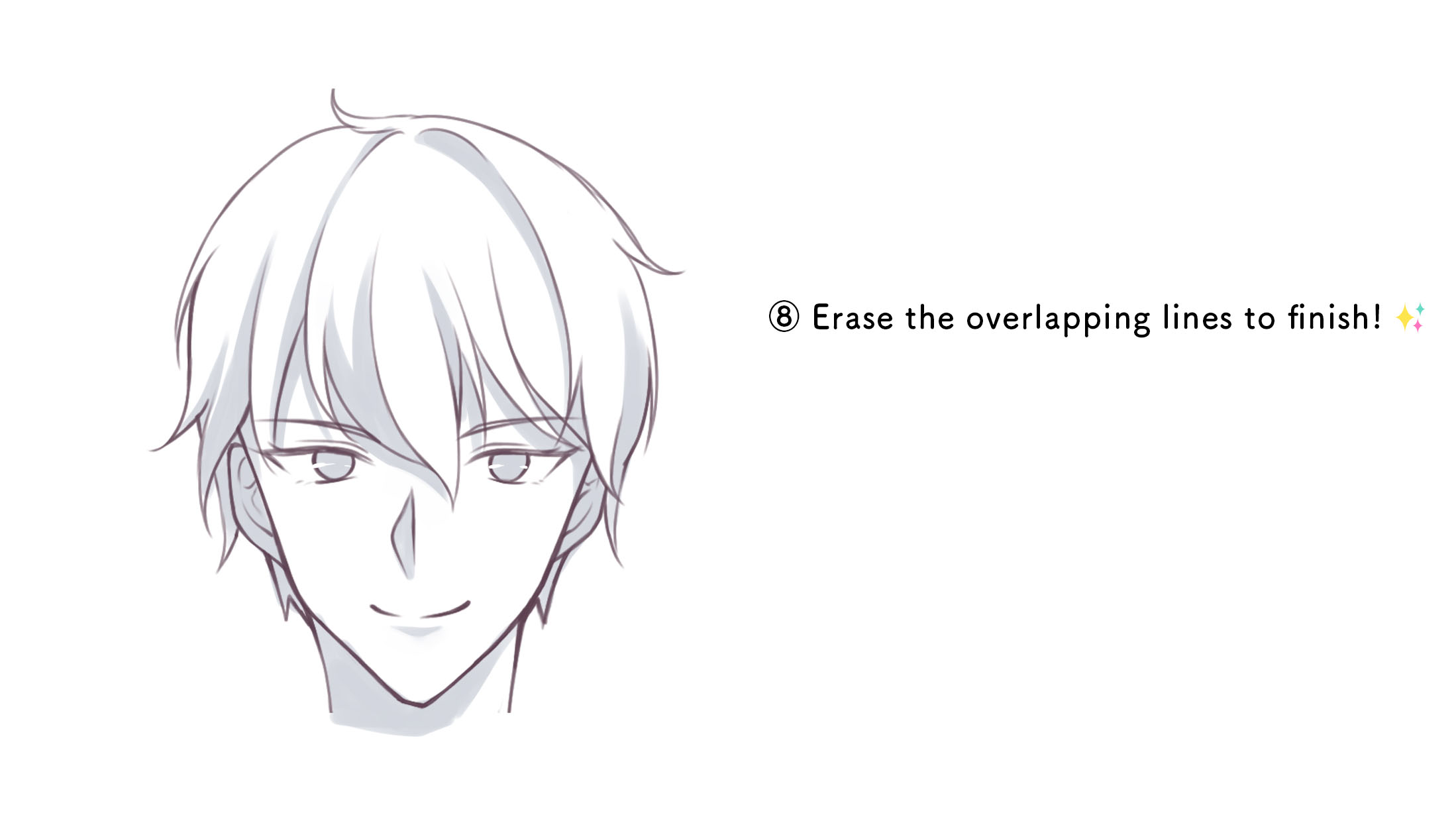 You can draw faces from various angles by moving the cross vertically and horizontally. 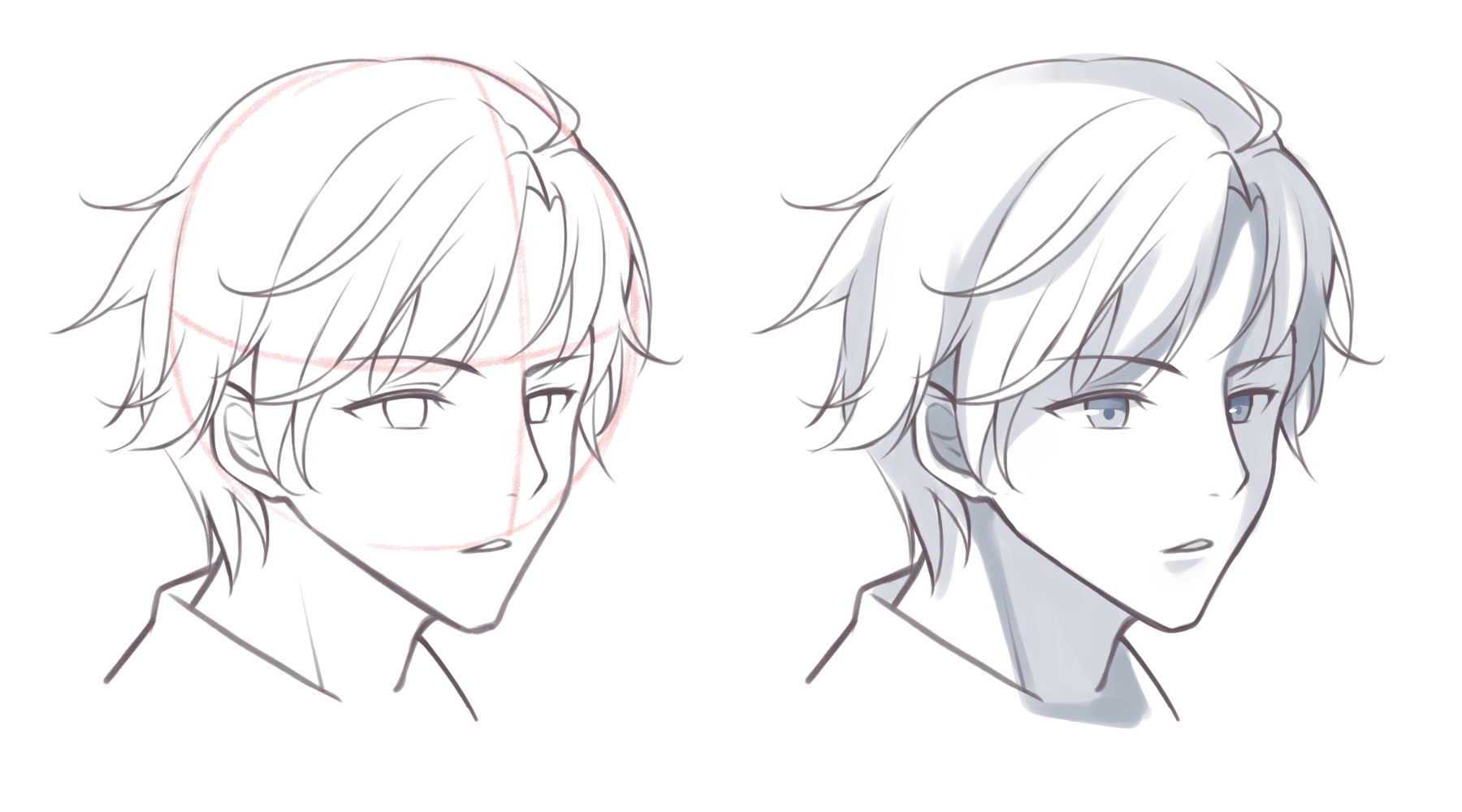 To summarize, the most important point for drawing a handsome face of male characters is to pay attention to the sharp facial outline.

Let’s go over the differences between a male and a female face. 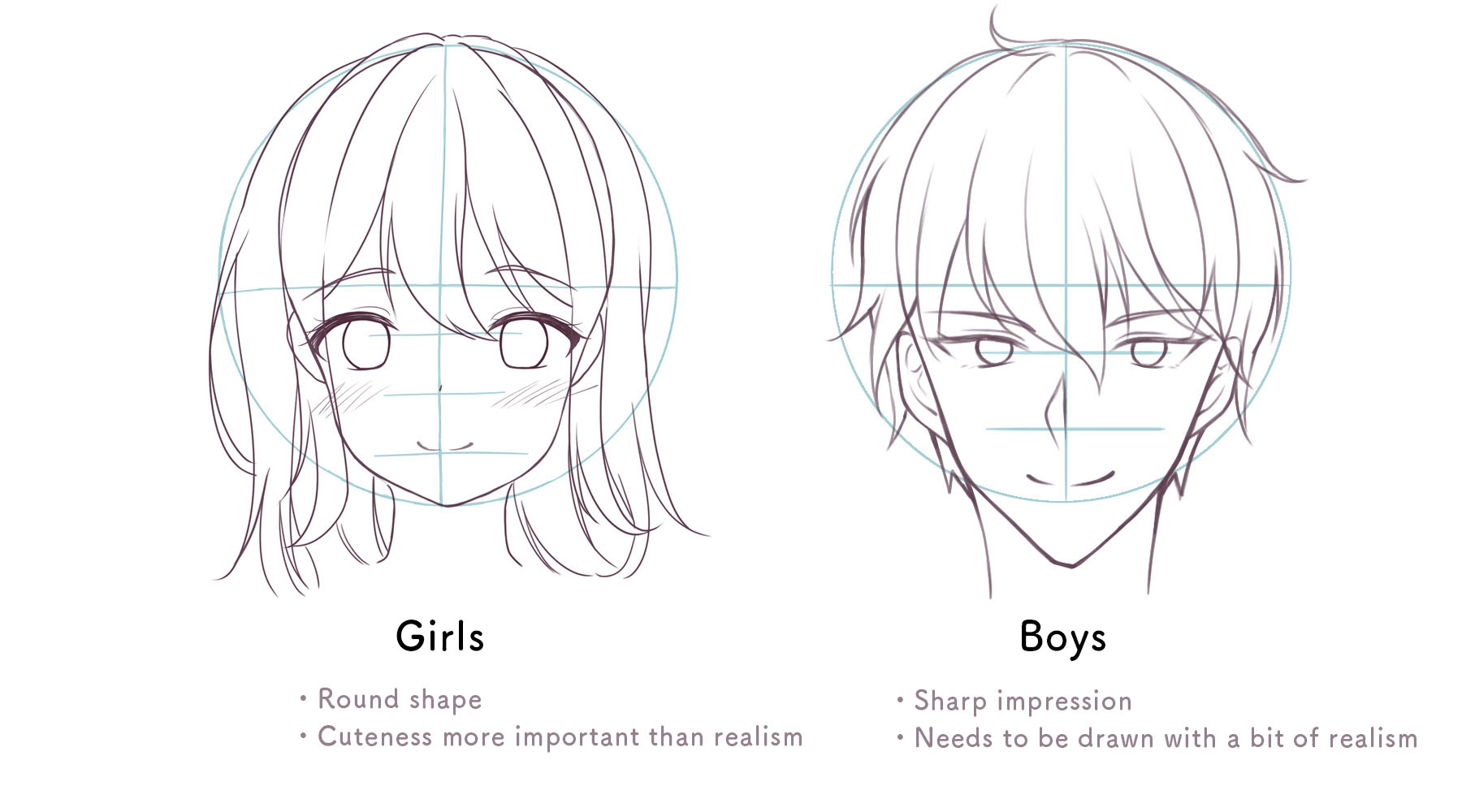 By combining both features well, you will be able to draw cute boys and cool girls too! 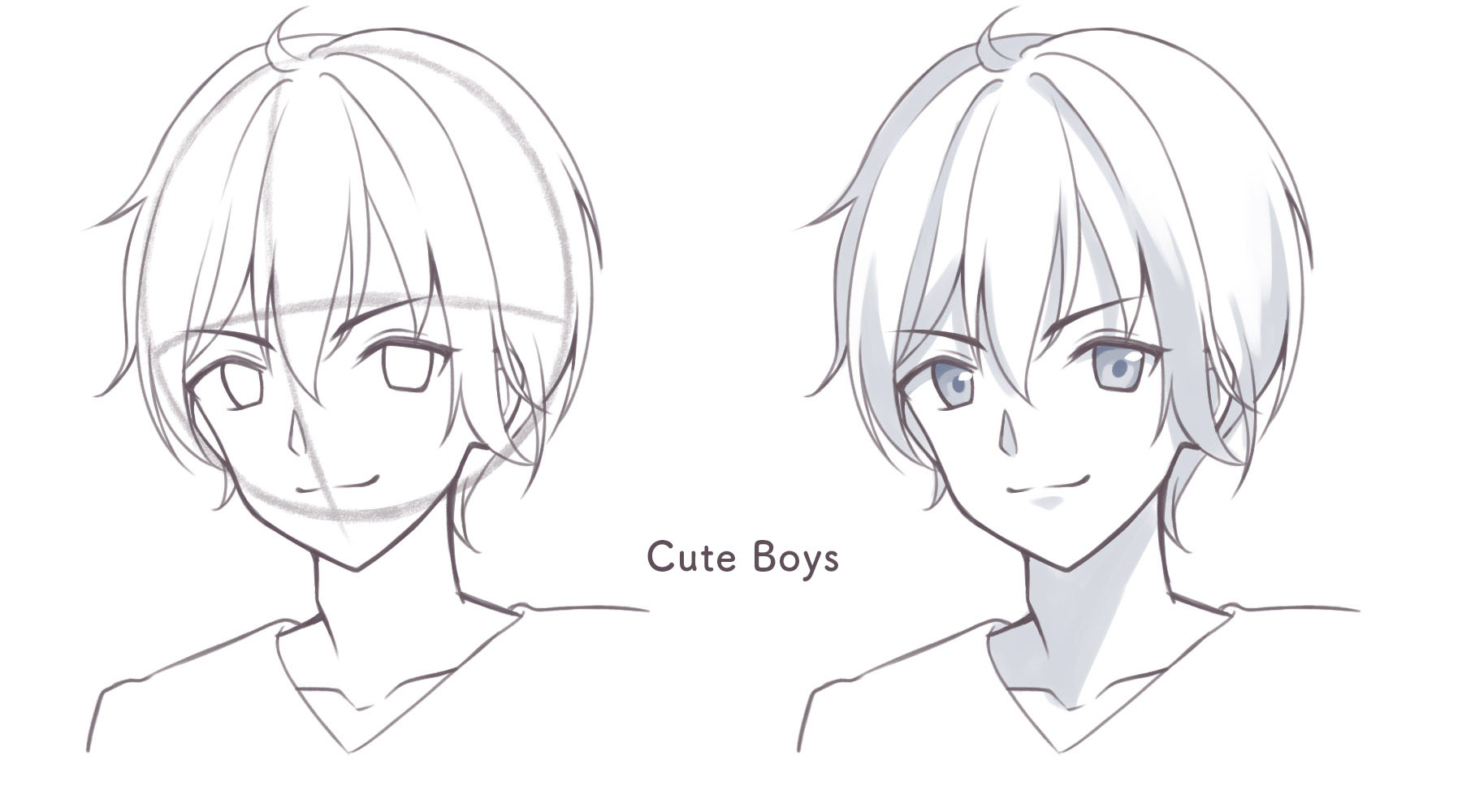 There isn’t a “correct answer” to drawings.

I introduced how to draw the face of a boy as easily as I could so I really hope that this article becomes a useful reference for drawing characters with your definition of “cool” and “cute” styles. 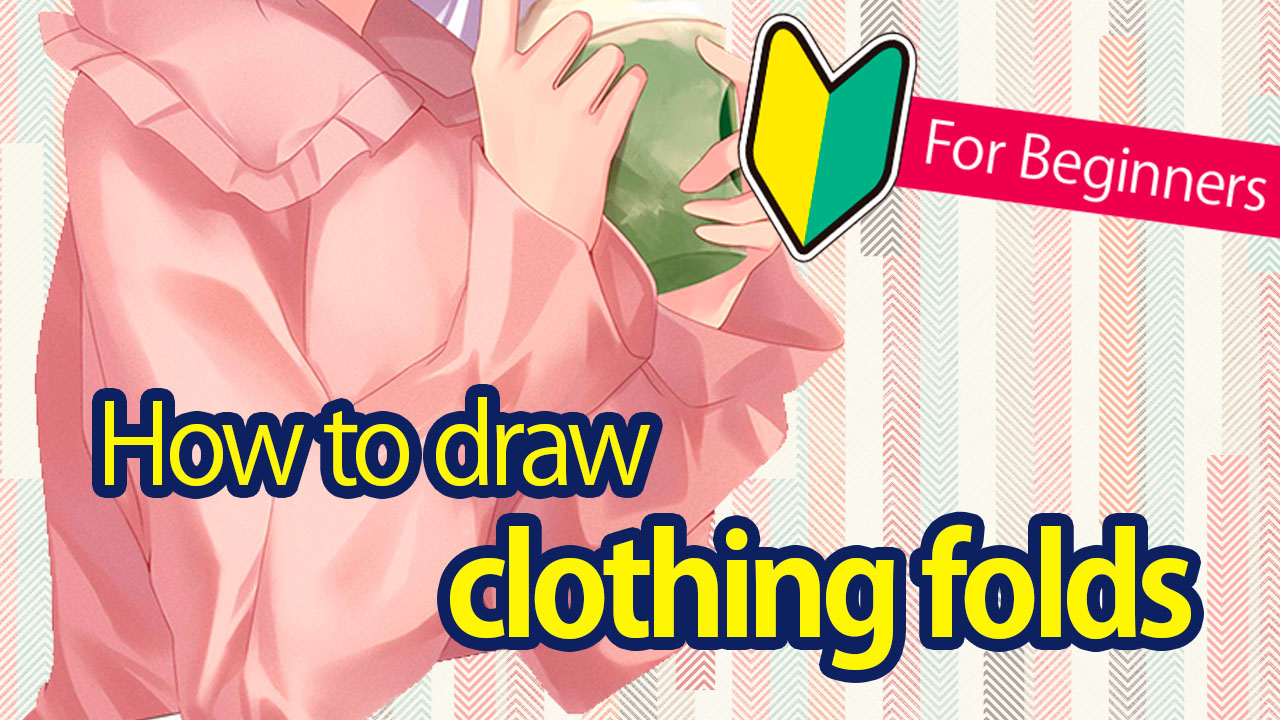 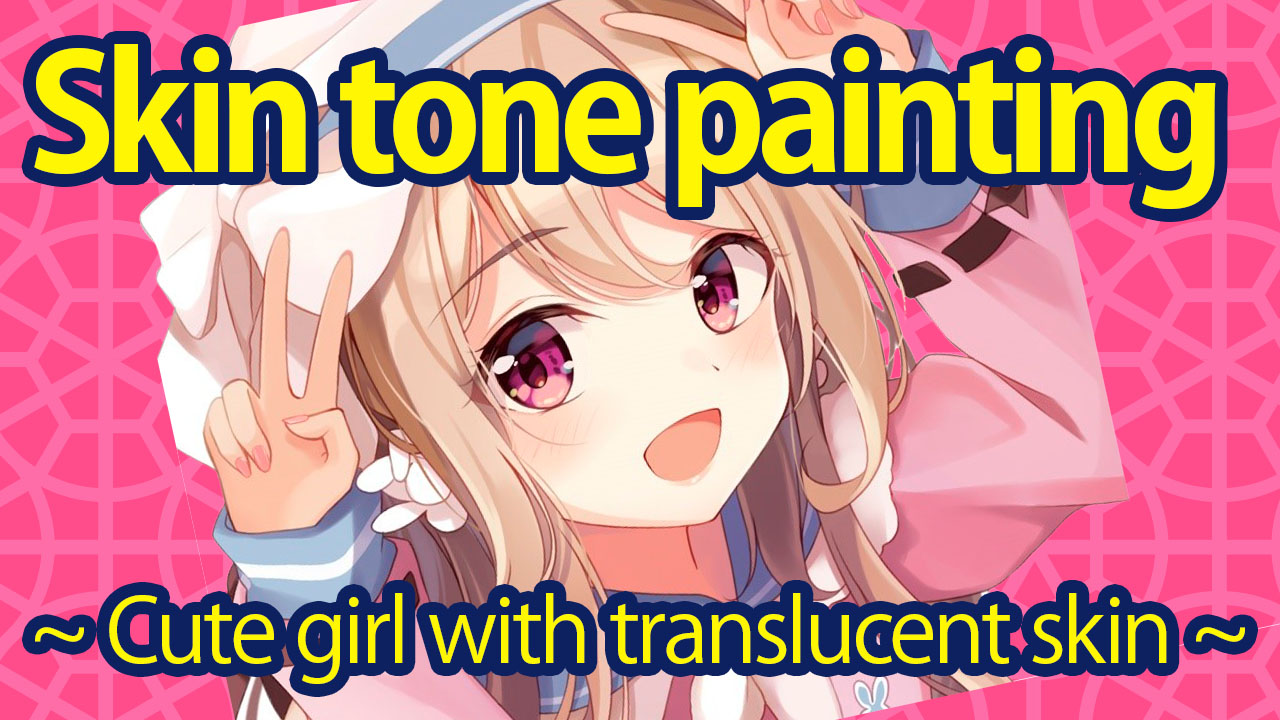 Painting the skin ~Drawing a girl with translucent skin~ 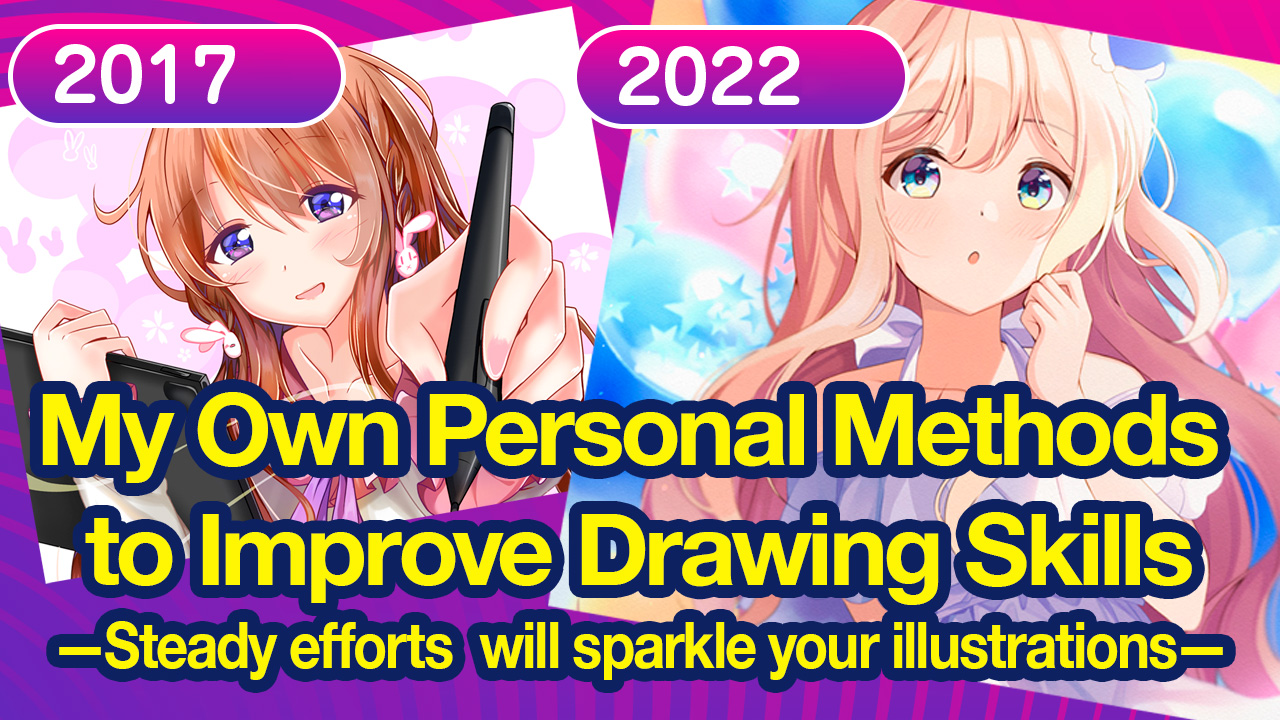 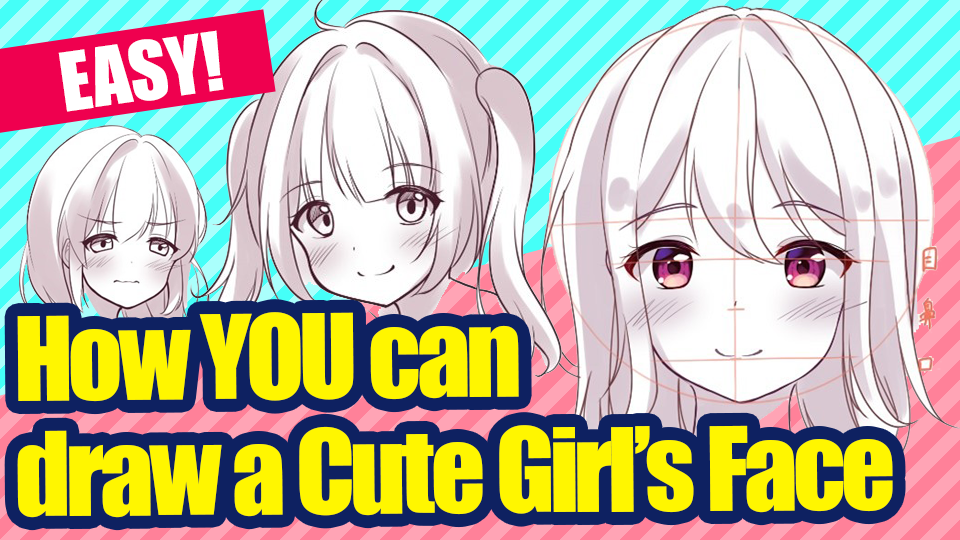 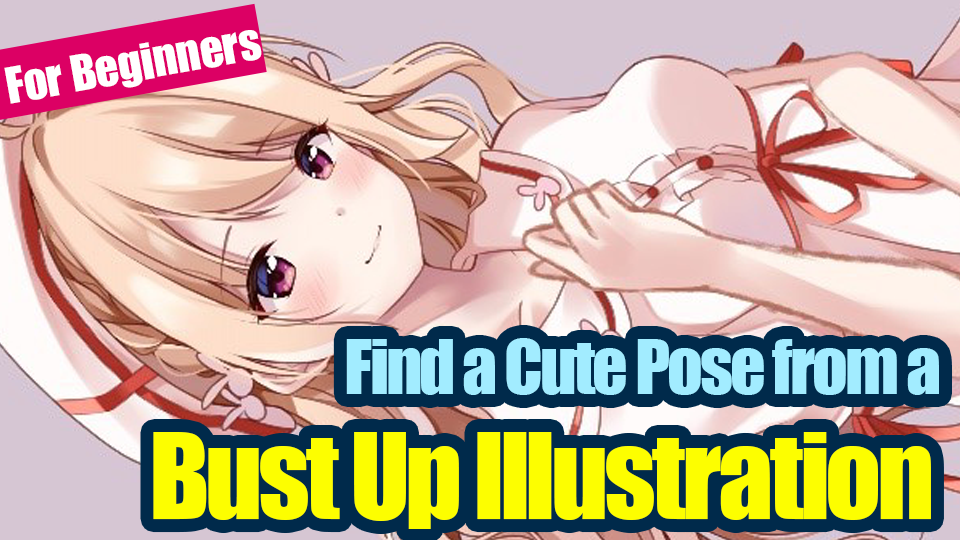