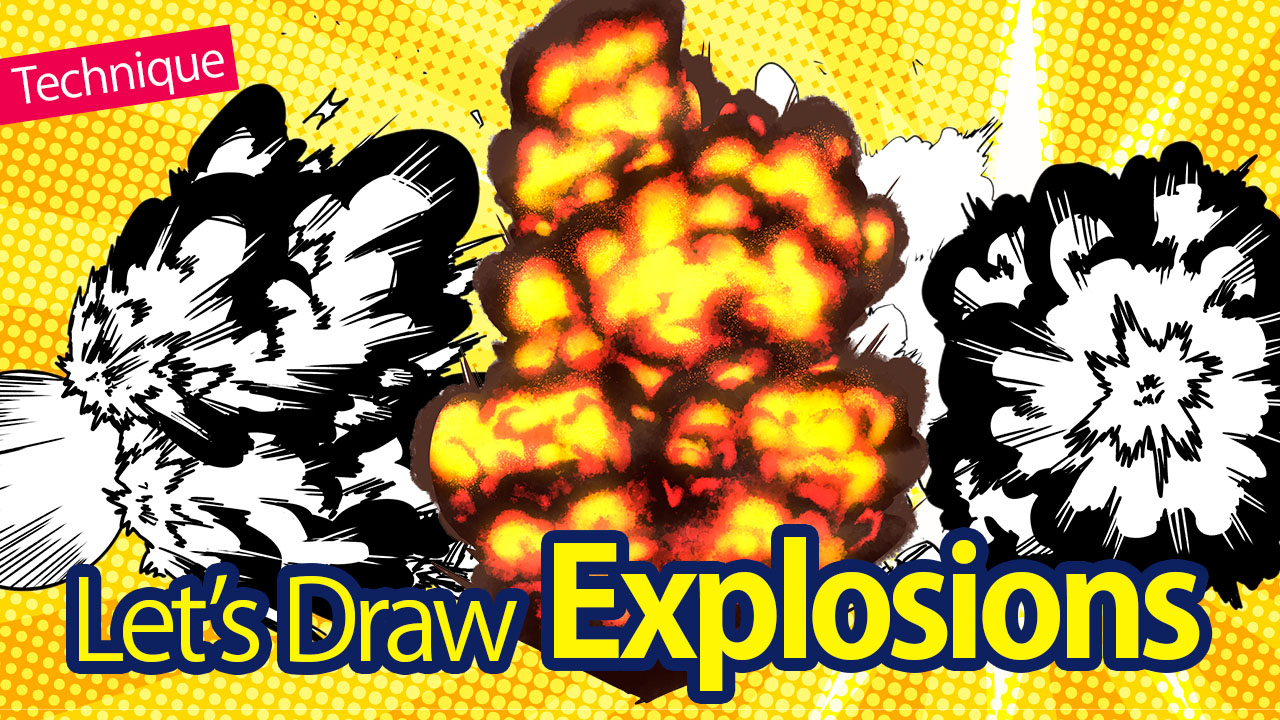 Are you drawing explosions?
Explosions are useful in both serious scenes and comedic scenes !
Maybe drawing them often might relieve your stress…?
In this tutorial, I will be introducing easy ways to draw explosions.
I hope this article helps you. 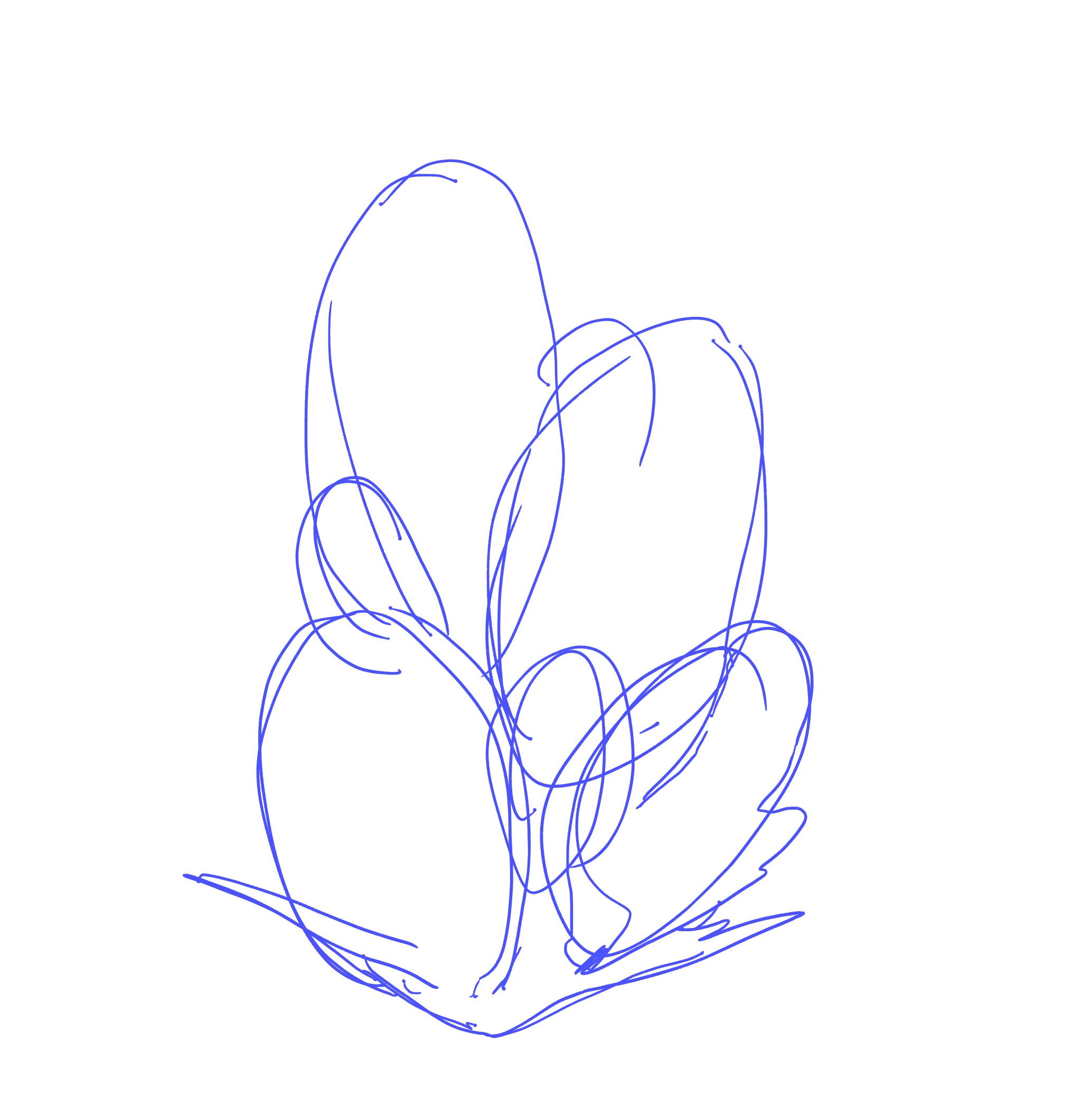 Choose the center of explosion and draw ellipses expanding in radial shape.
The tip here is to fill the spaces between the large ellipses by drawing in small ellipses. 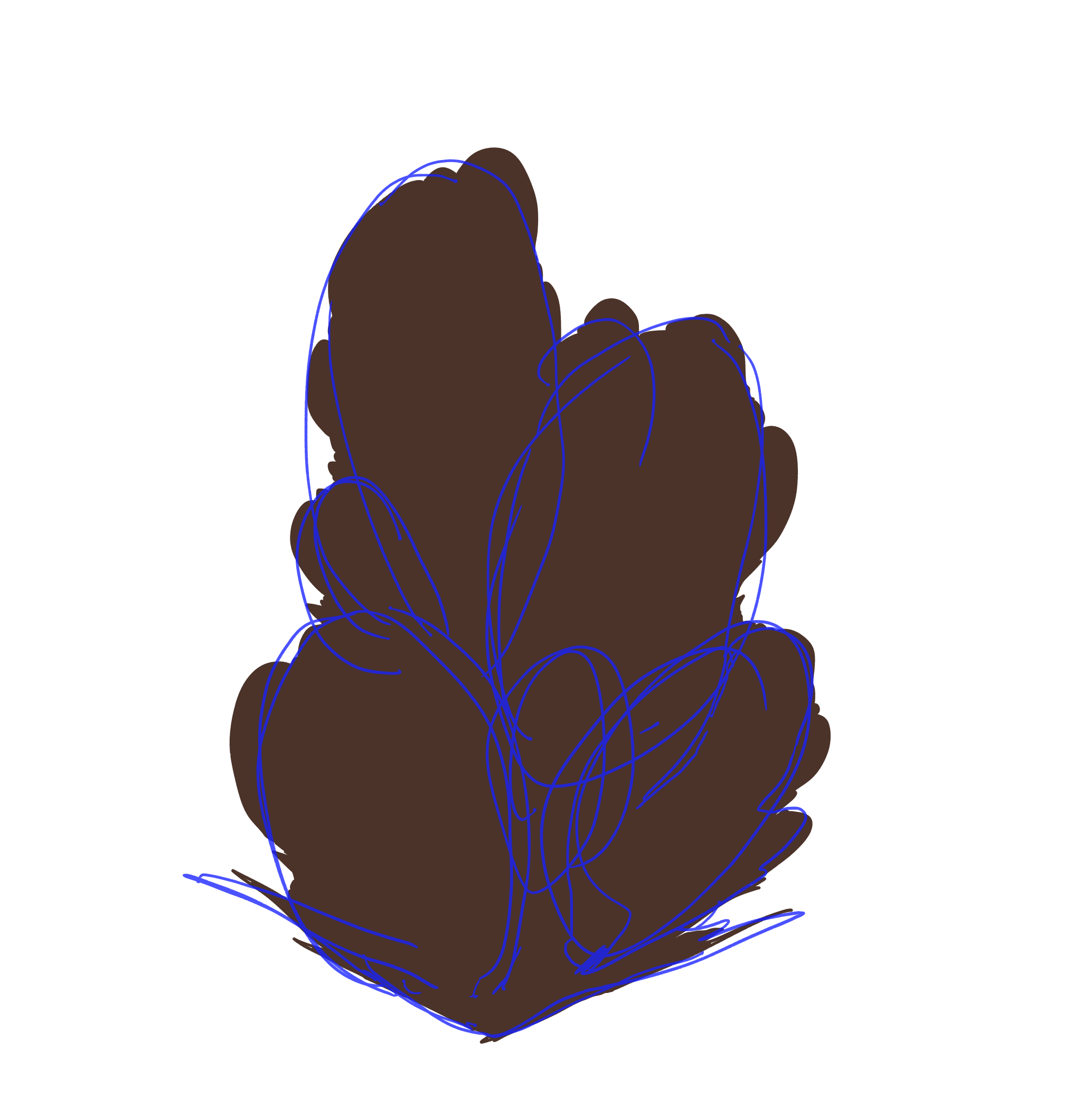 Once you have the sketch, paint it roughly with a base color.
Pay attention to various sizes of the elliptical shapes in the draft and draw in even smaller ellipses, so the outline looks fluffy. 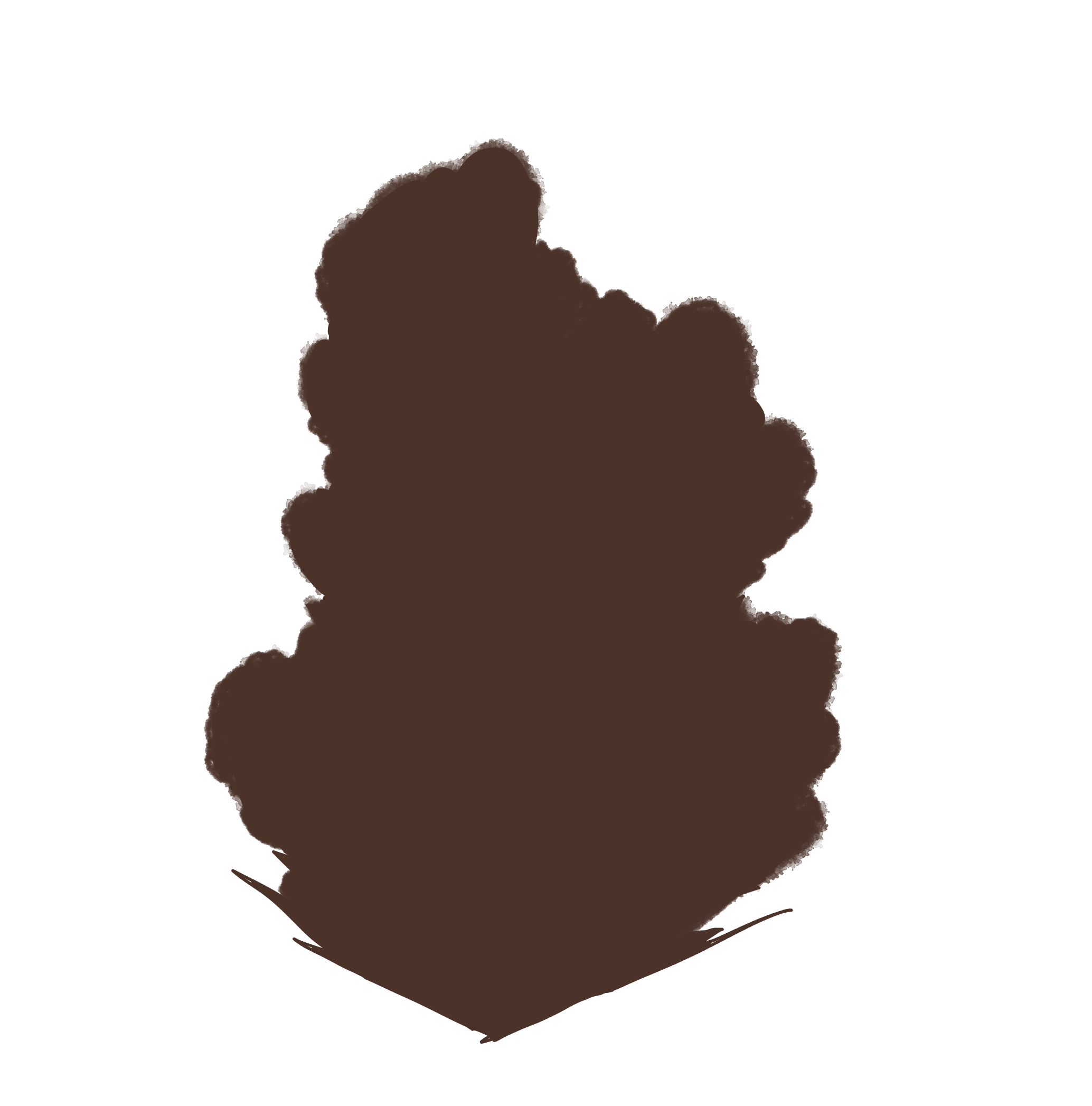 Use the “Fluffy Watercolor” brush from here onwards.
Sharpen the edges to achieve the smokey look. 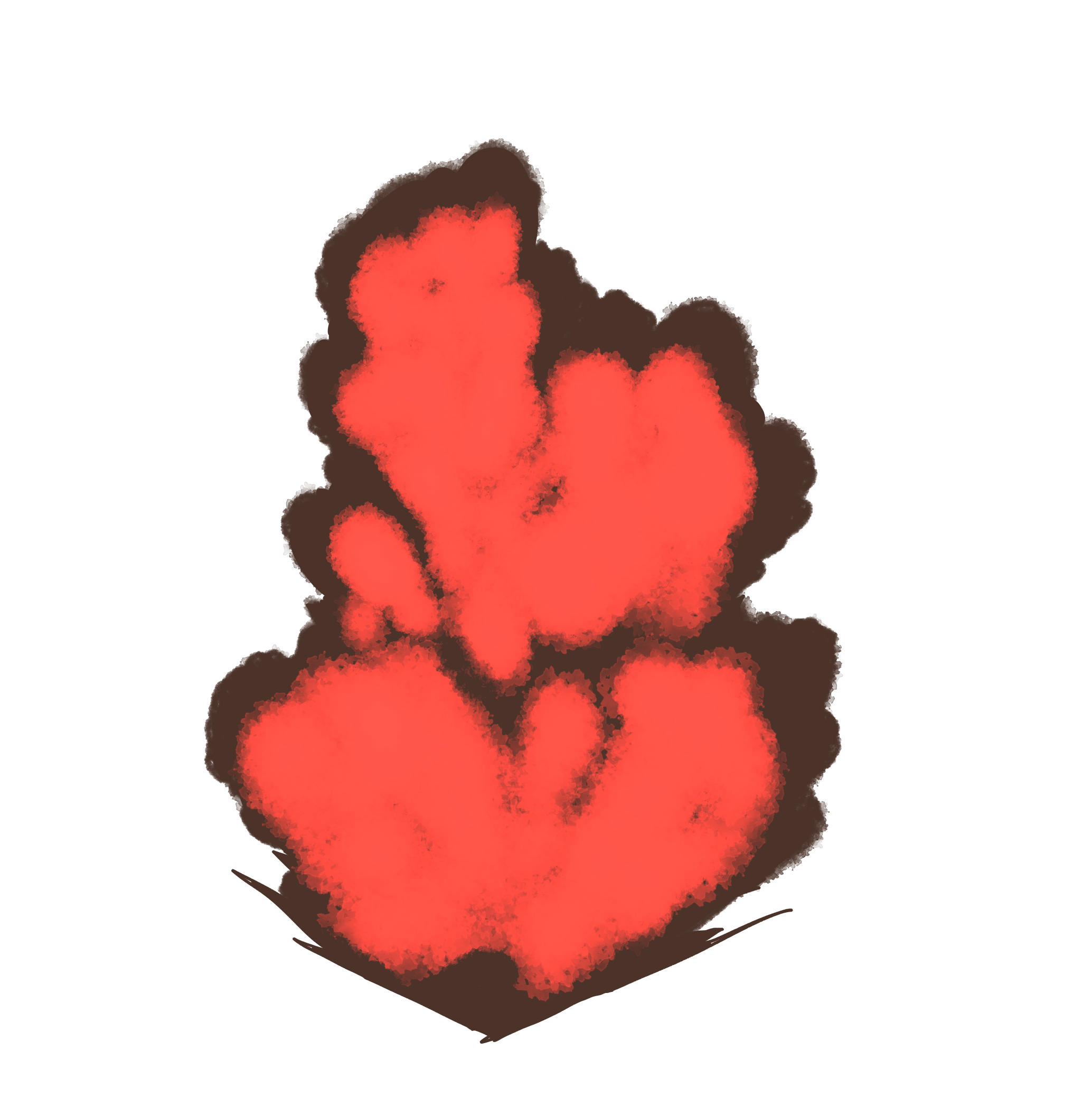 Complete your base and roughly draw the explosive flames using red.
Once again, keep the elliptical shape in mind when drawing! 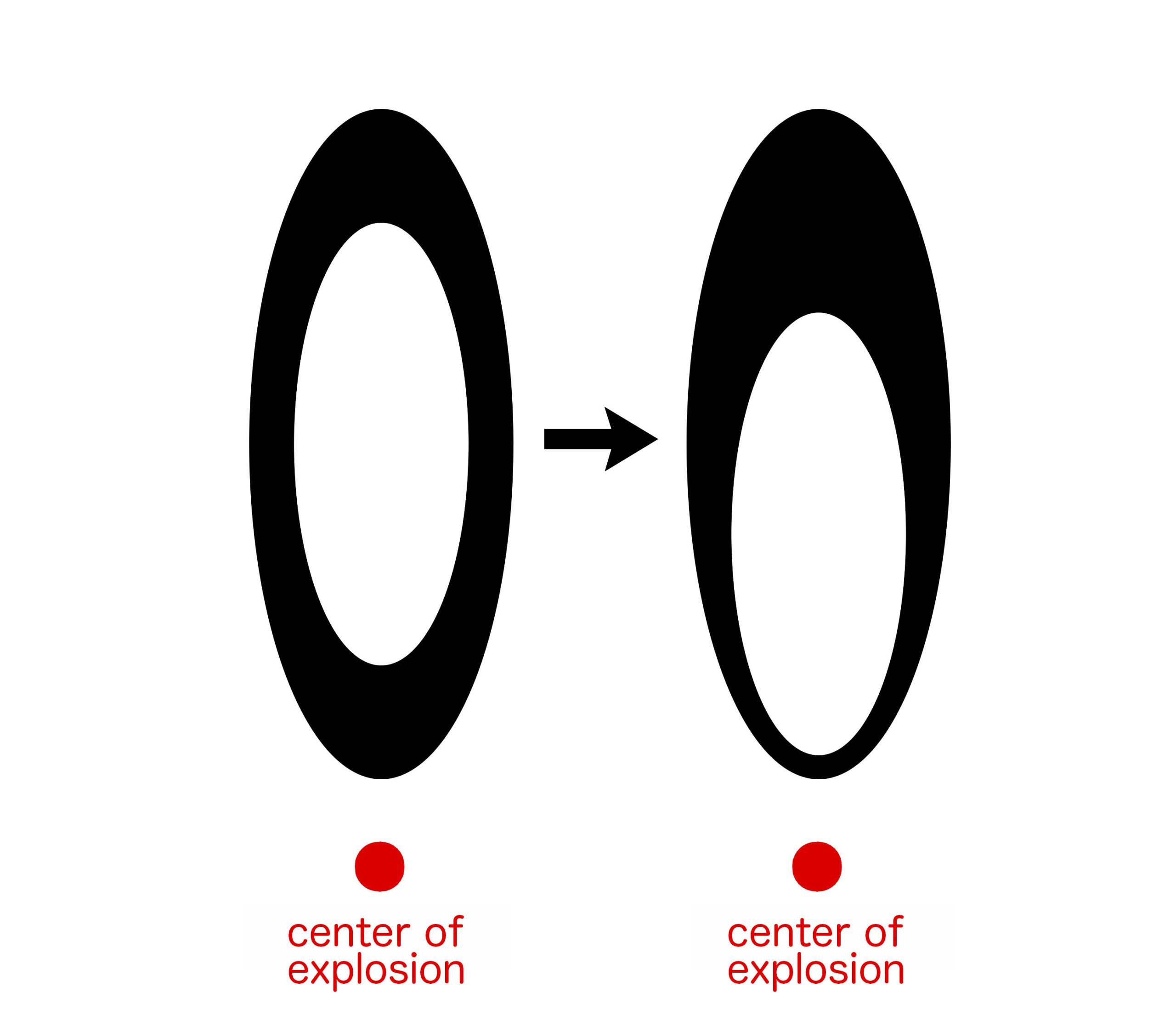 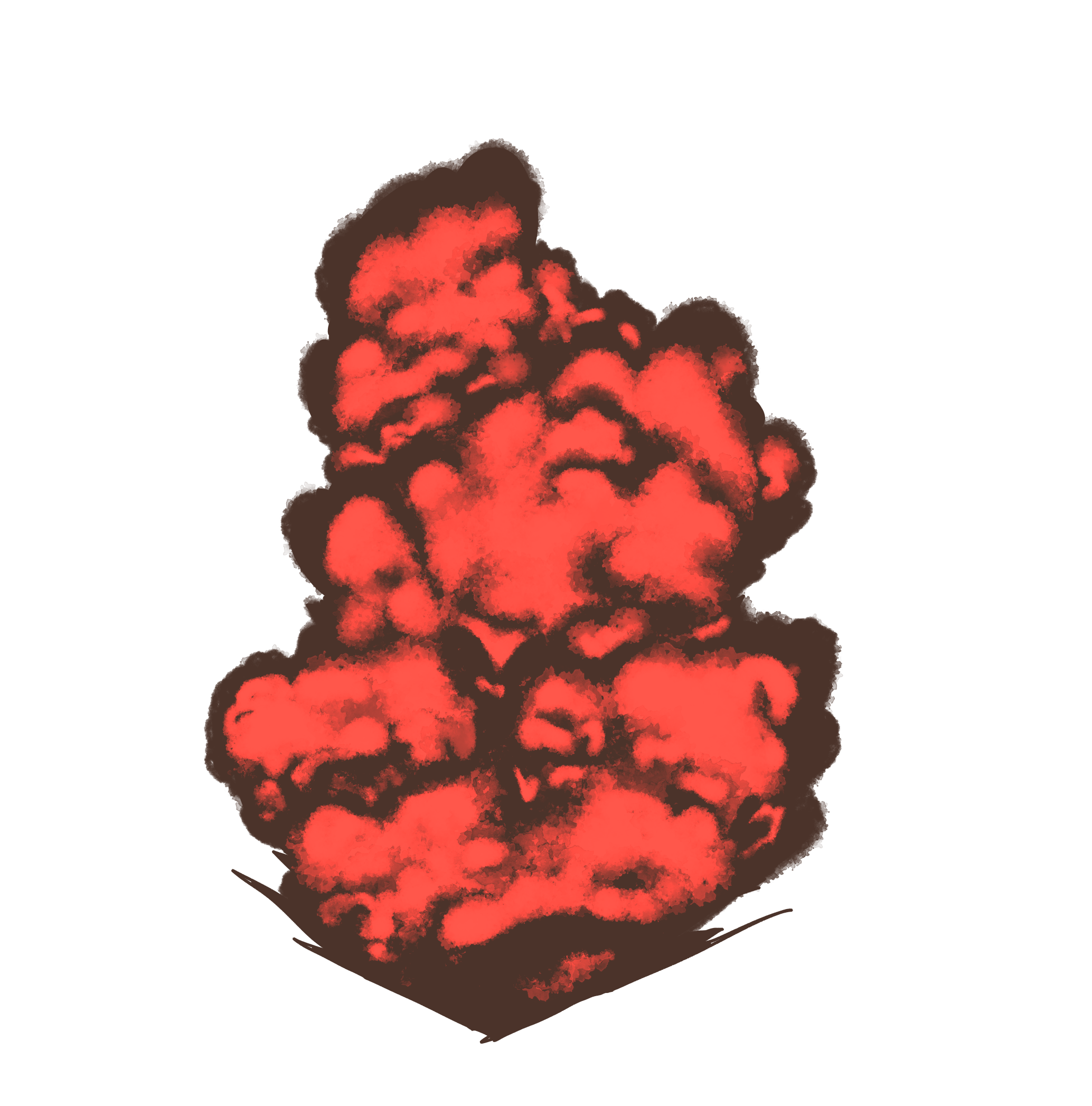 Once you finish coloring, set the color of the Fluffy Watercolor brush to a transparent color and clean the shapes by thinly sharpening the flames.
Imagine this red as flames leaking from the brown smokes. You can create the burning flame look by thinning the edge of the red parts.

Explosions must be sharpened
This is a general tip for drawing explosions but the sharp look can be achieved by drawing in more on smaller ellipses than large ellipses. 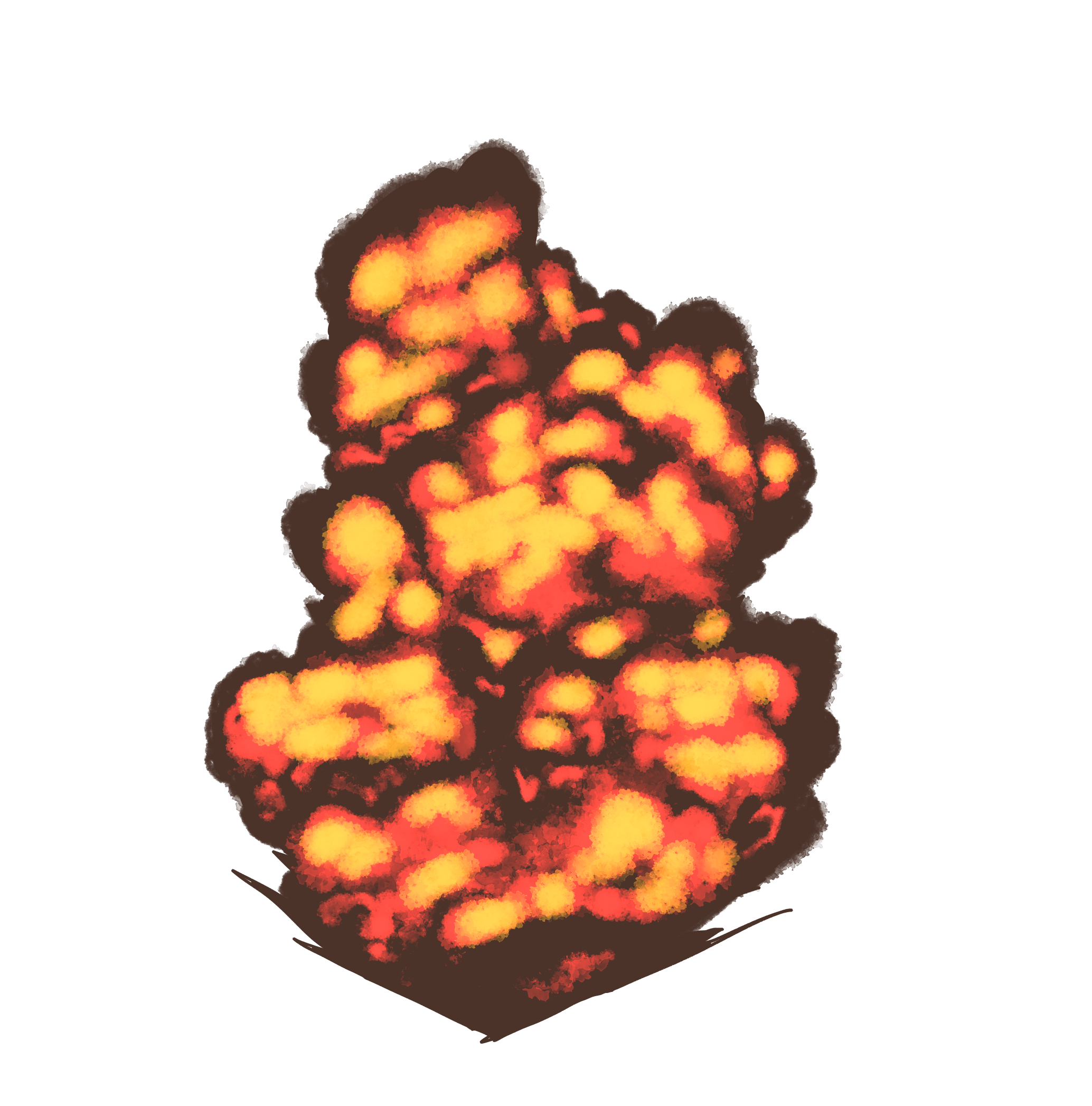 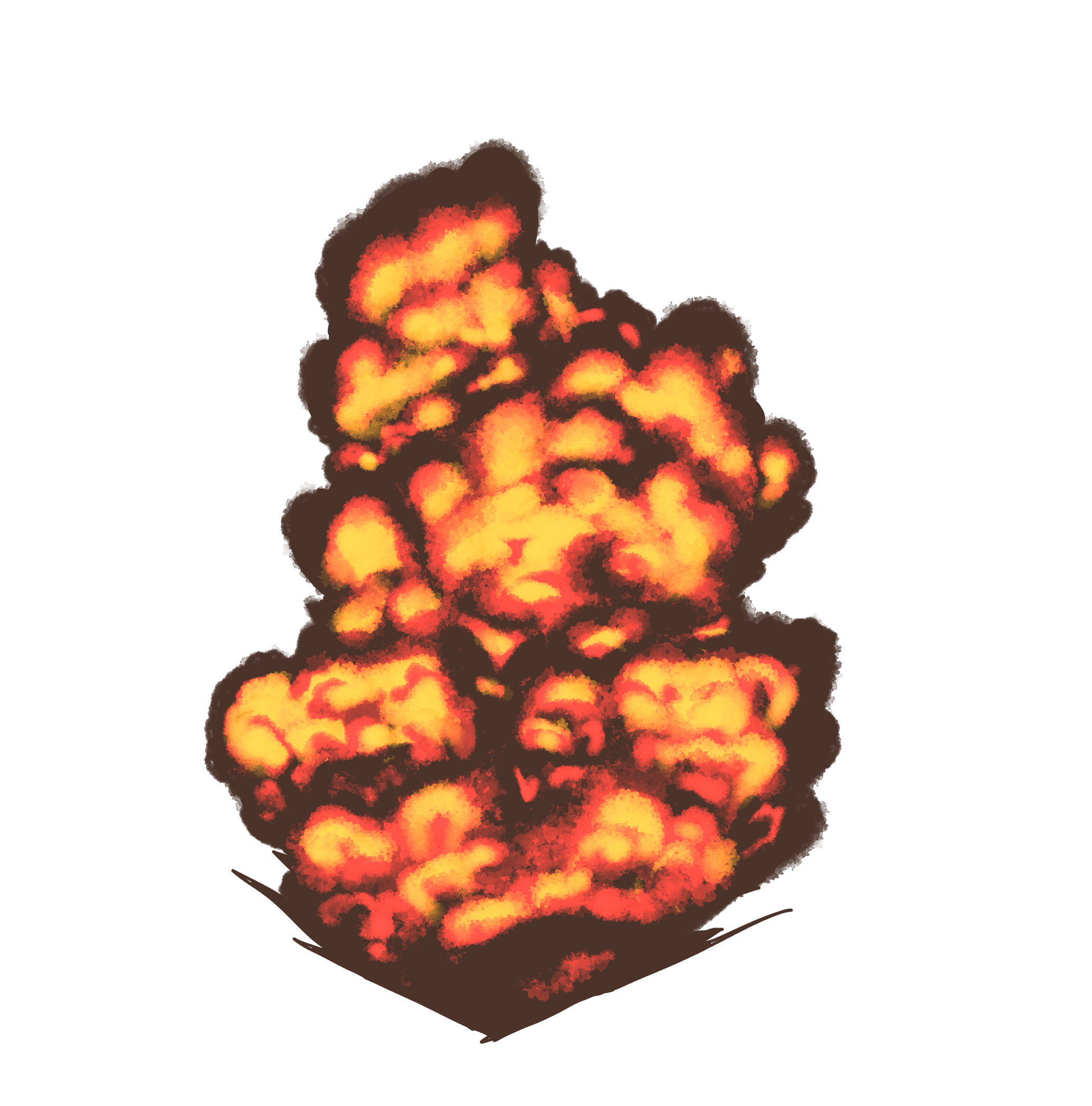 As I did for the red explosive flames, repeat the sharpening and drawing-in process to clean up the detailed parts.
Think of the flames boiling up!
Now it looks much more like an explosion.

Adding shadows to the base flames 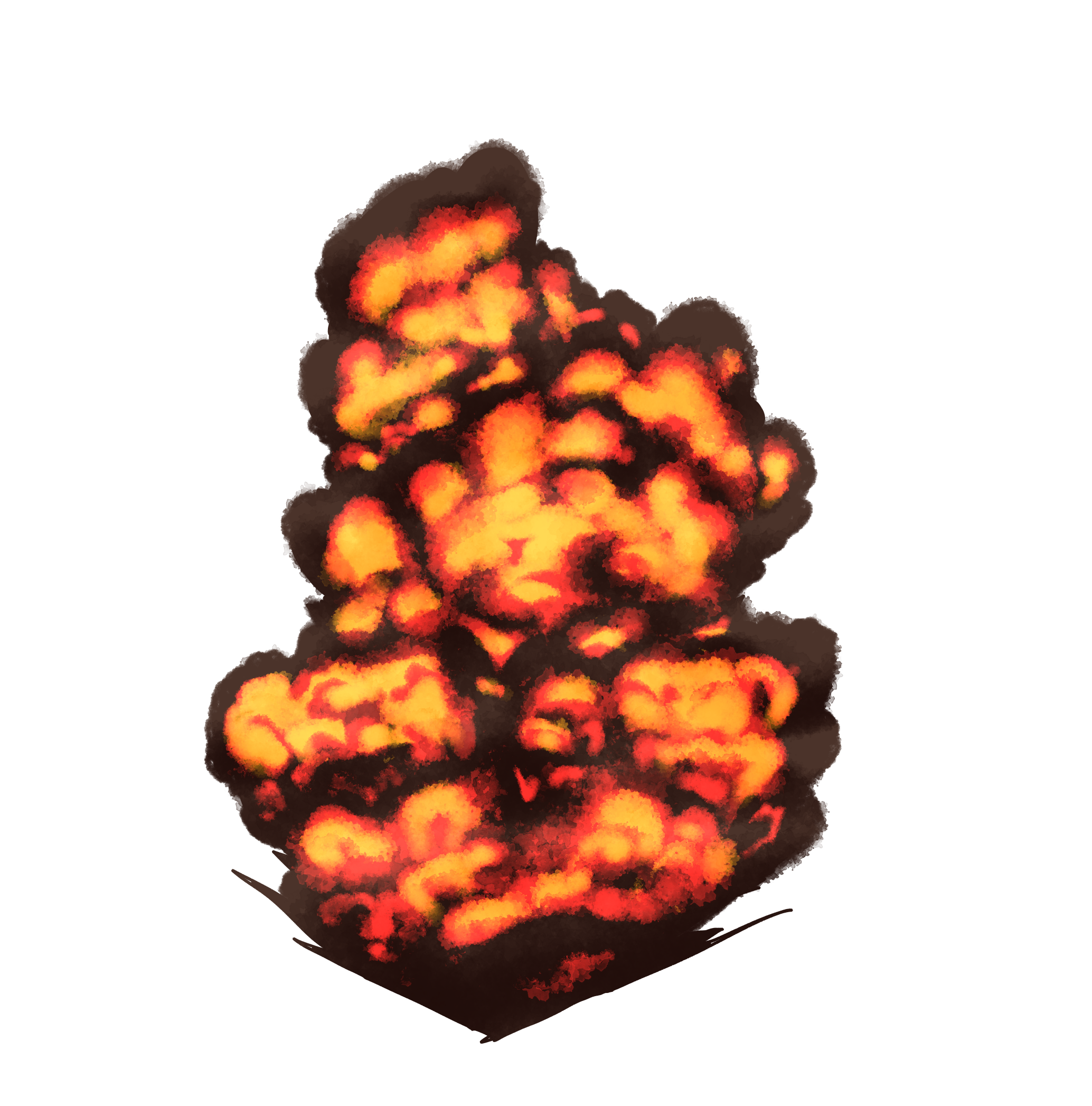 You can create a dimensional look by adding shadows to the base flames.
Just adding some rough shadows will make it look much more realistic. 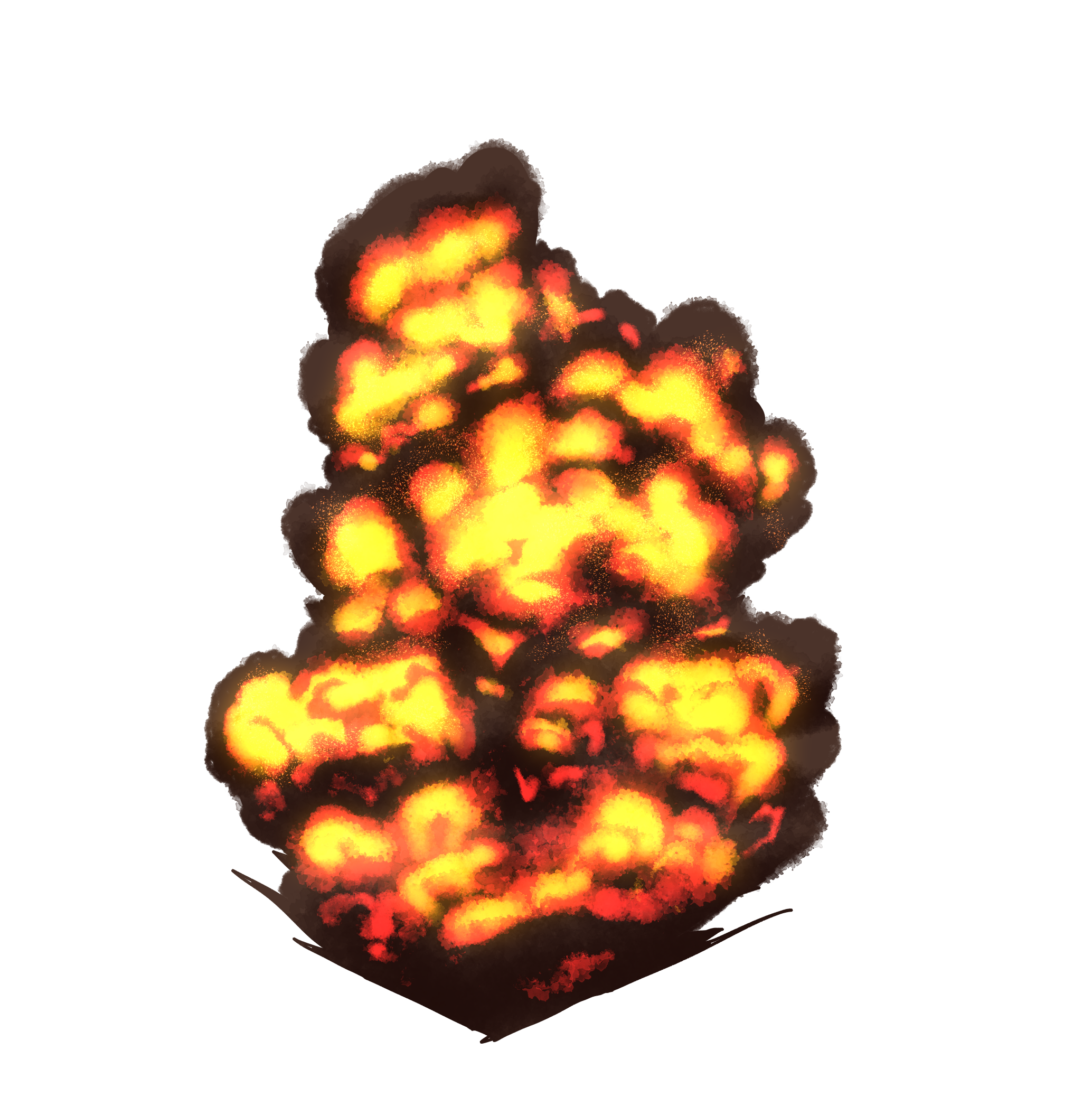 Copy the layer with the yellow flames from earlier and, from “Filter” choose “Gaussian Blur”.
Adjust the transparency so that the glow doesn’t glare too much.

For more details, use the “Fragment” brush to draw sparks, dusts and also add spikes to the flames as well. 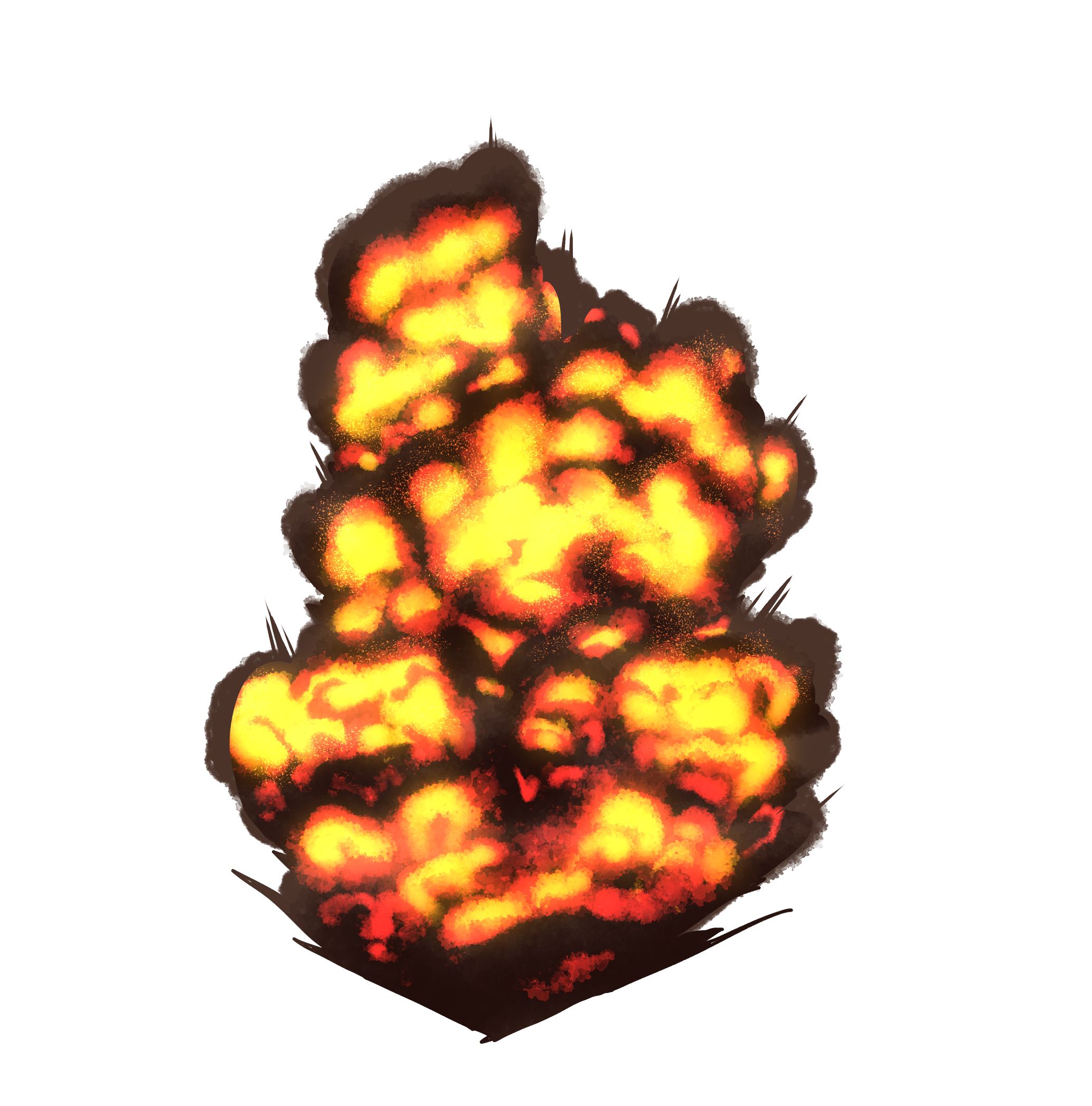 Boom!
Now the explosion is completed, thank you for following this tutorial!

How to draw manga-style explosions

I will now explain how to draw explosions in monochrome manga.
The only brush for use will be the “G Pen” but the standard processes are mostly the same as done for colored illustrations. 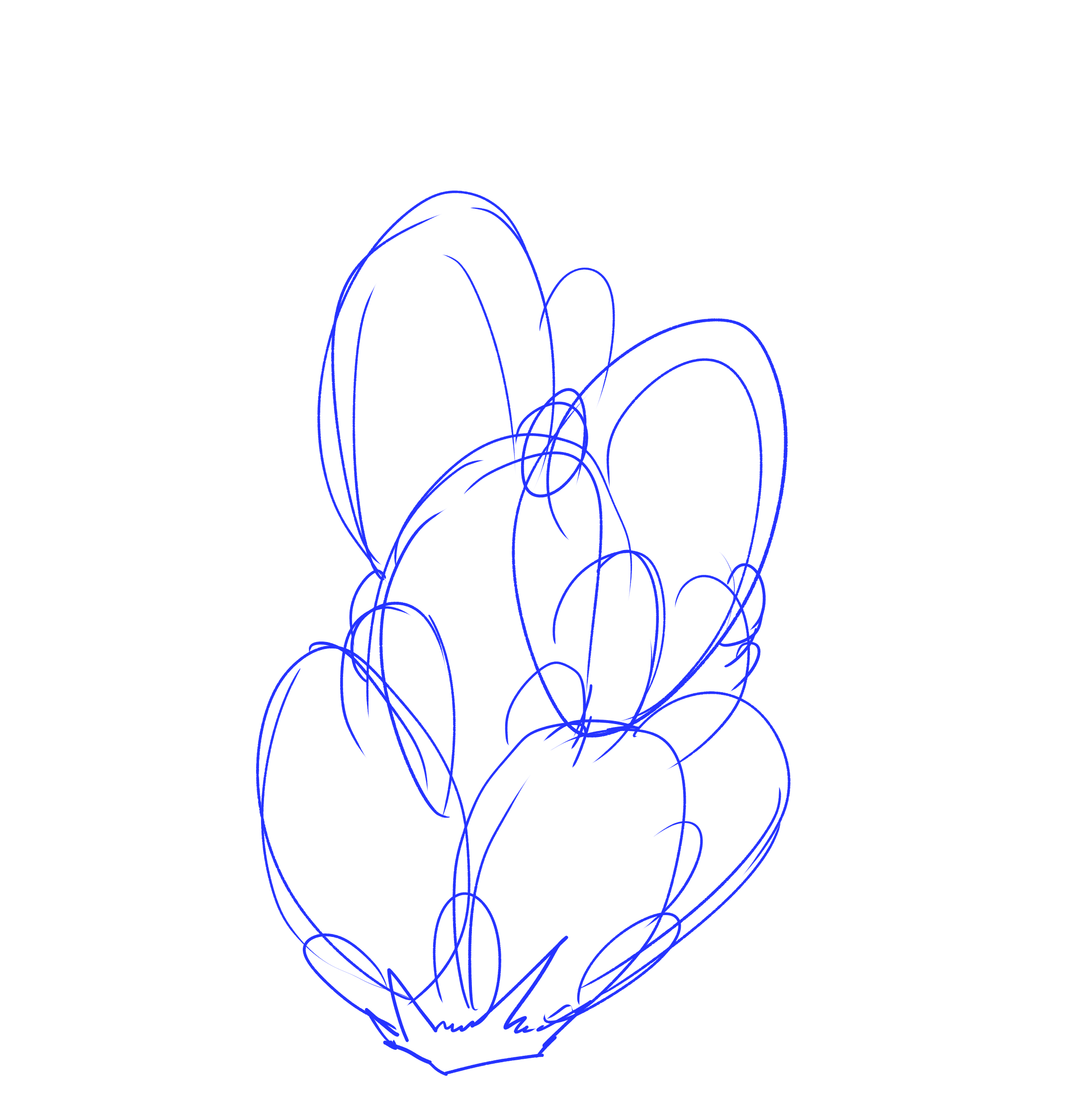 Draw the rough draft.
Pay attention to the elliptical shape! 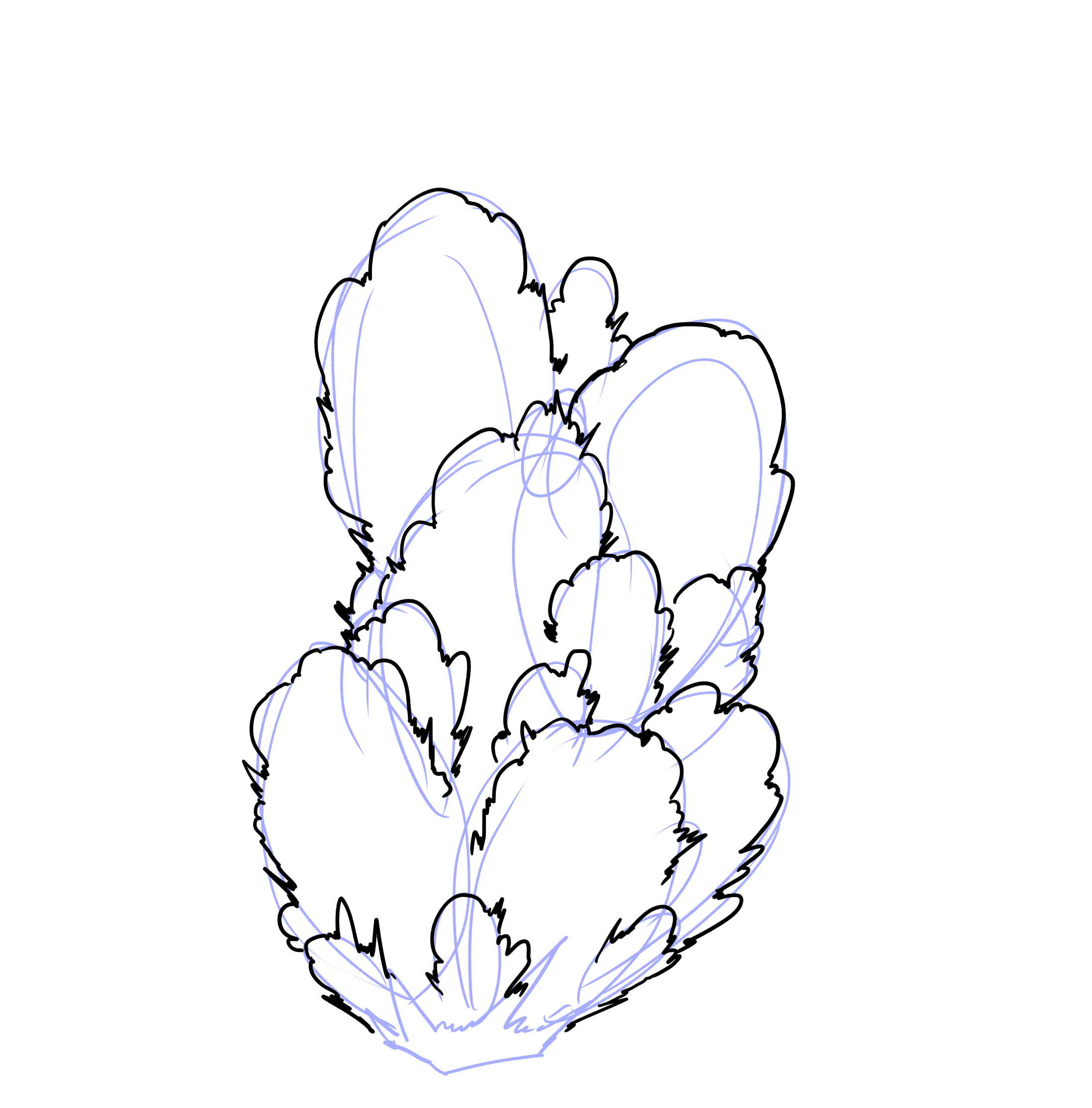 Create a line drawing.
Draw the small explosions on the inside too. 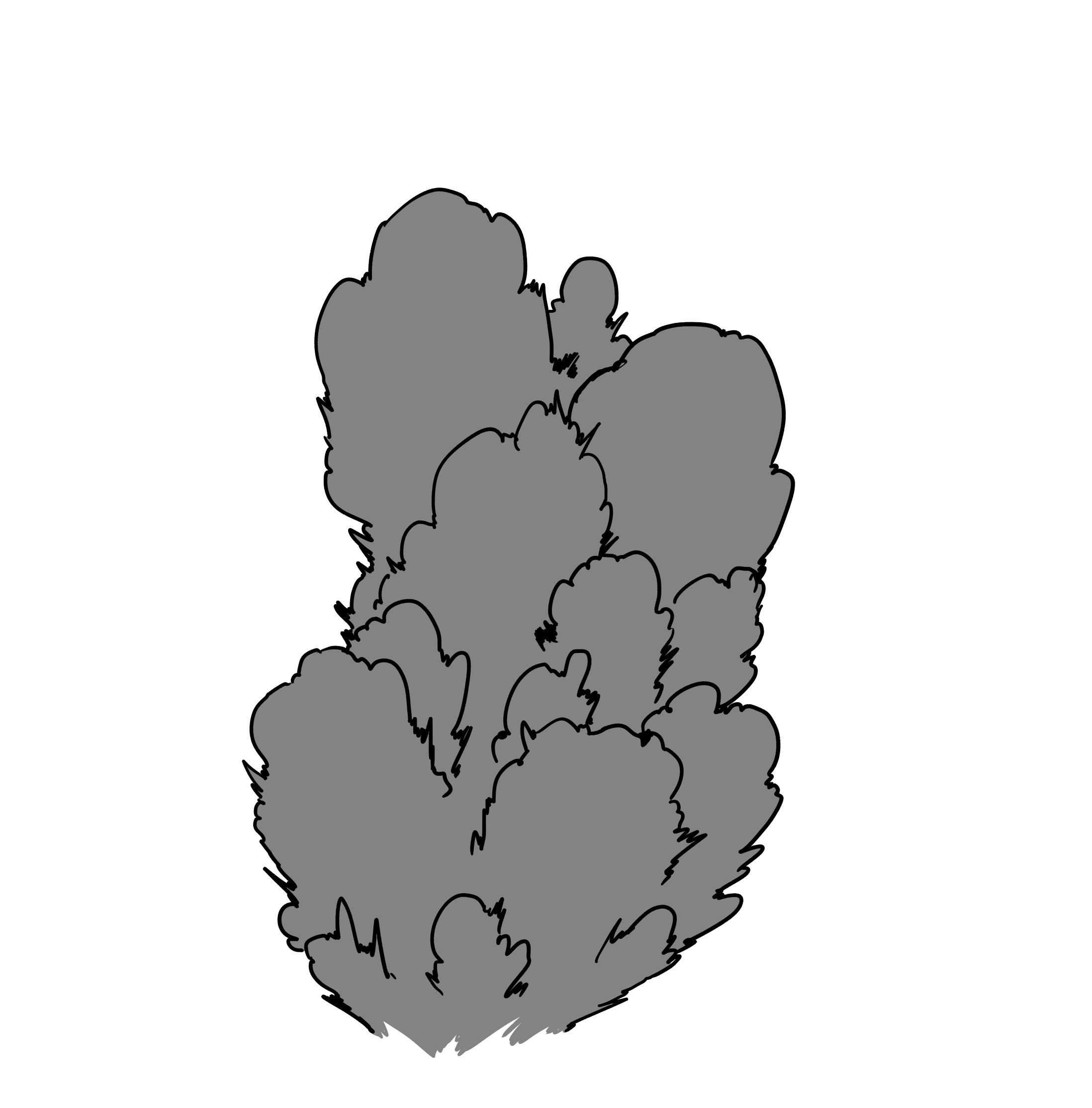 Once it’s complete, create a new layer and fill in the explosion with black.
Drop the opacity so you can see your line drawing. 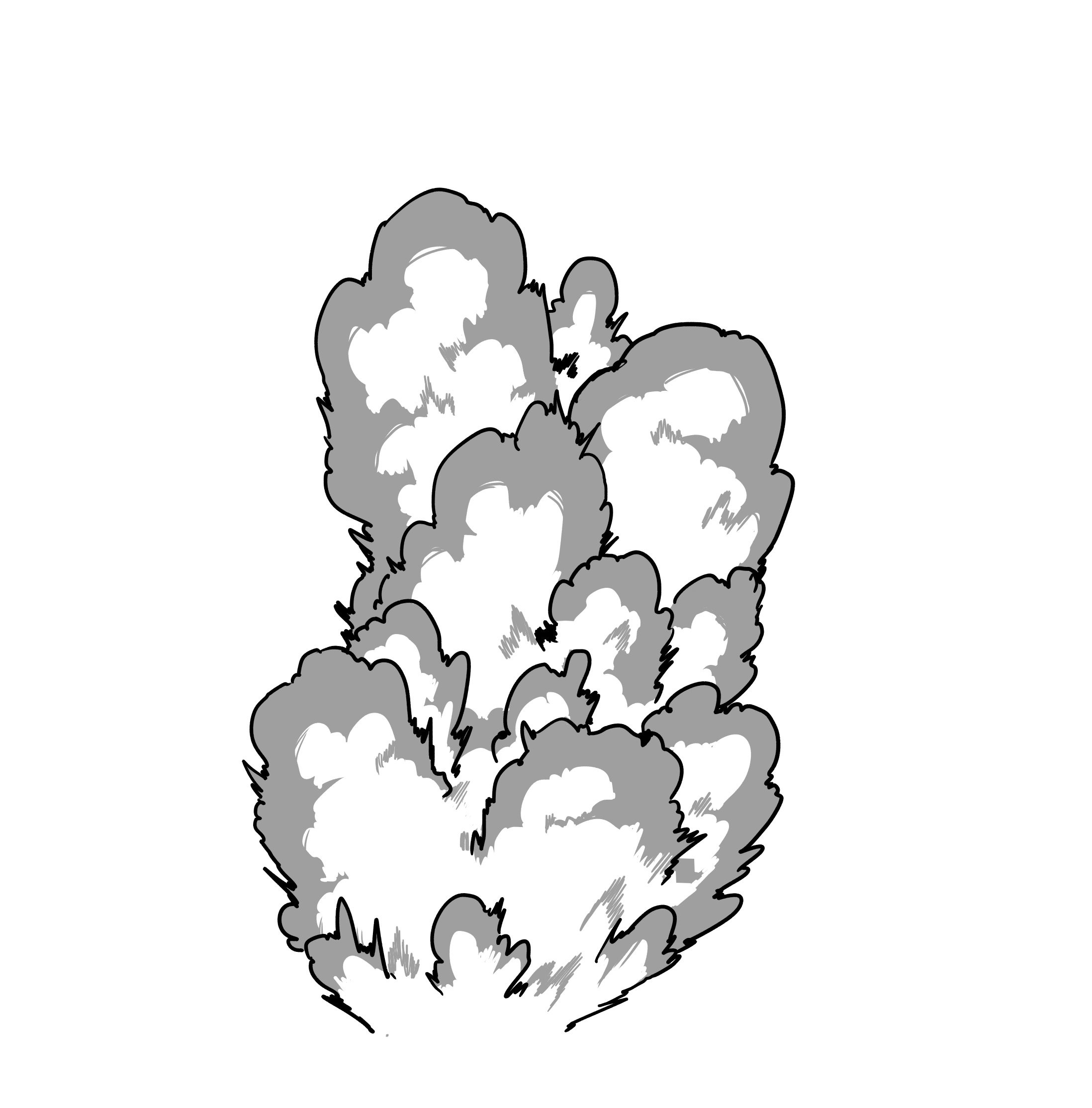 Use white or transparent color to sharpen the explosions.

It is exploding well but it’s lacking something…

Now let’s add the effects!
These are the effects that best amplify the explosion: 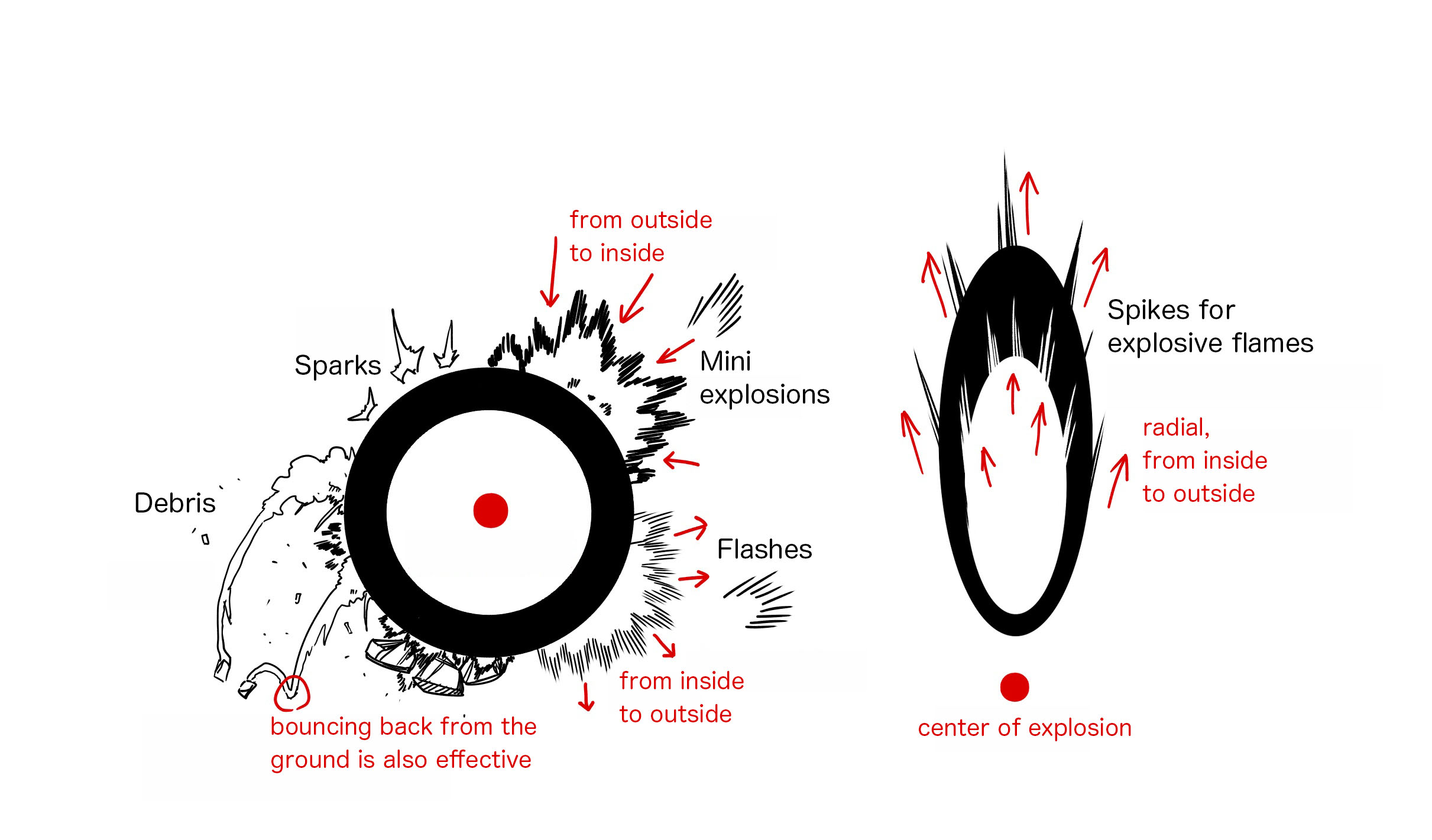 It will be cluttered if you add everything at once so make use of the supporting roles to fit the scene you are drawing.
My tip is to draw the effects so it fills the small spaces left empty.

Draw in the supporting effects around various places and now it’s complete! 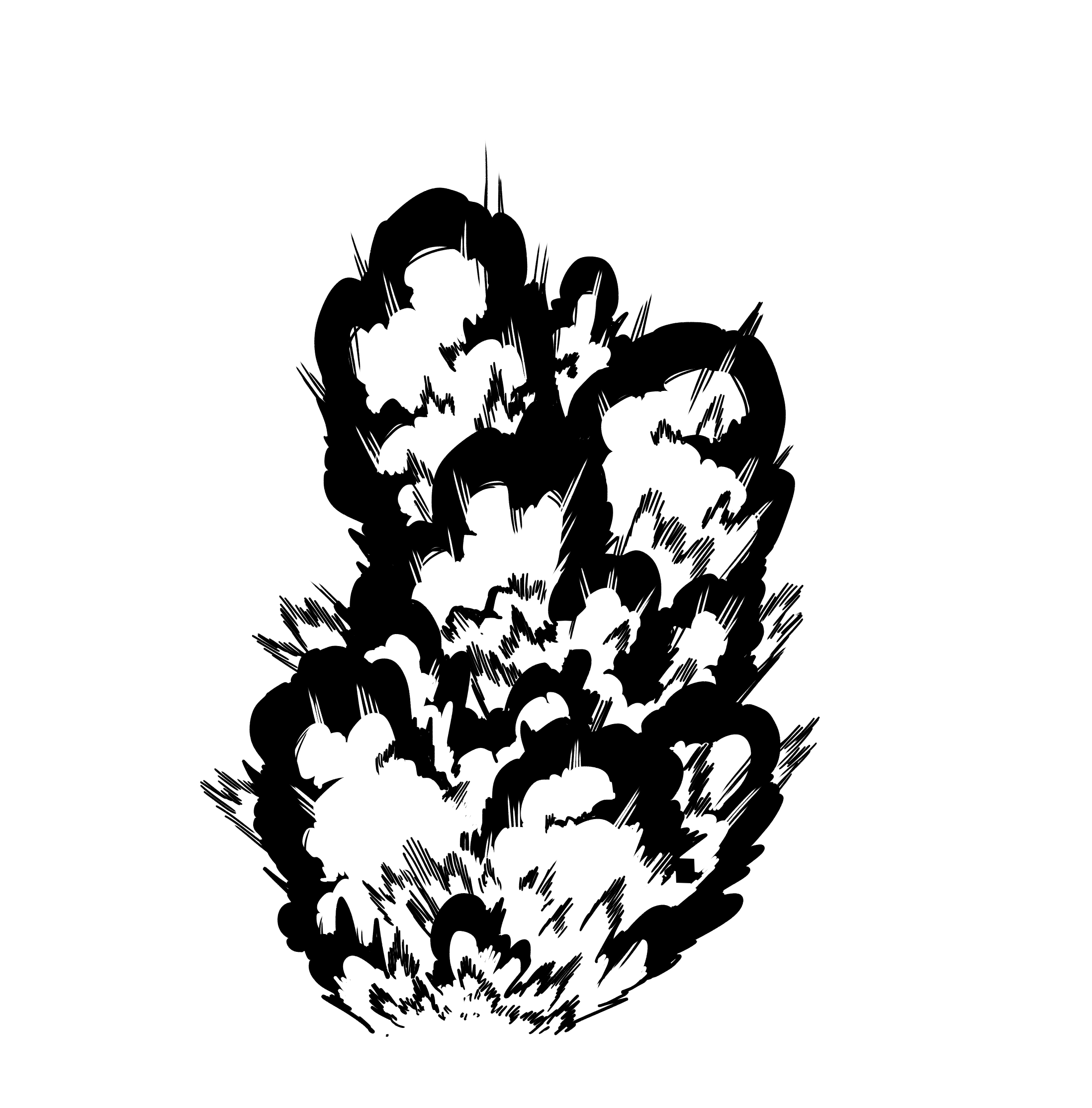 It looks well exploded, doesn’t it?

If you can draw explosions well, the illustrations will stand out even more!

Let’s create a catastrophe with a bunch of explosions! 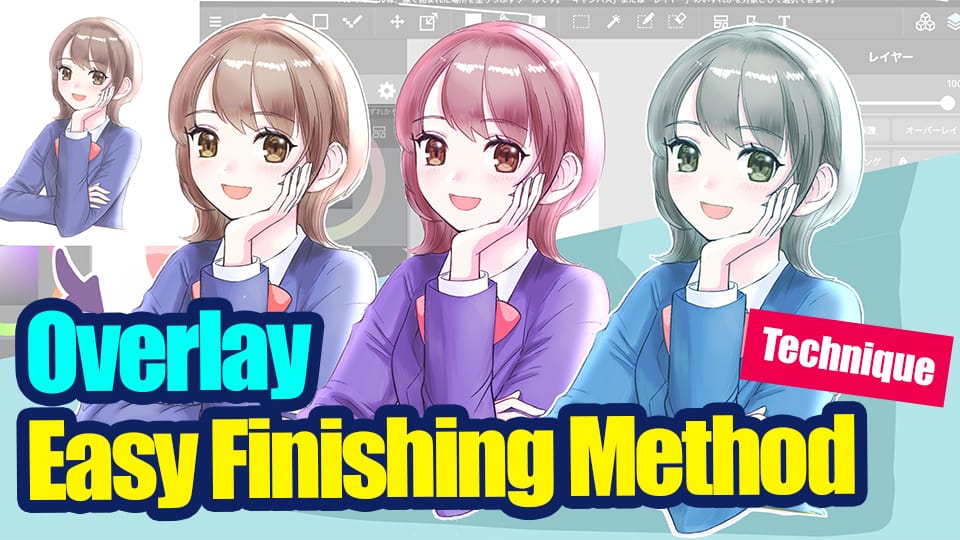 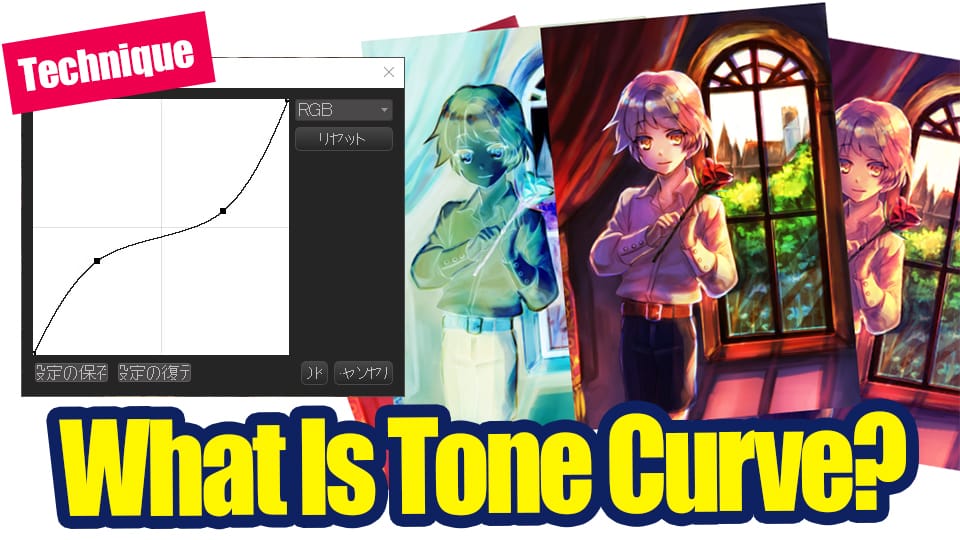 [Technique] What is Tone Curve? 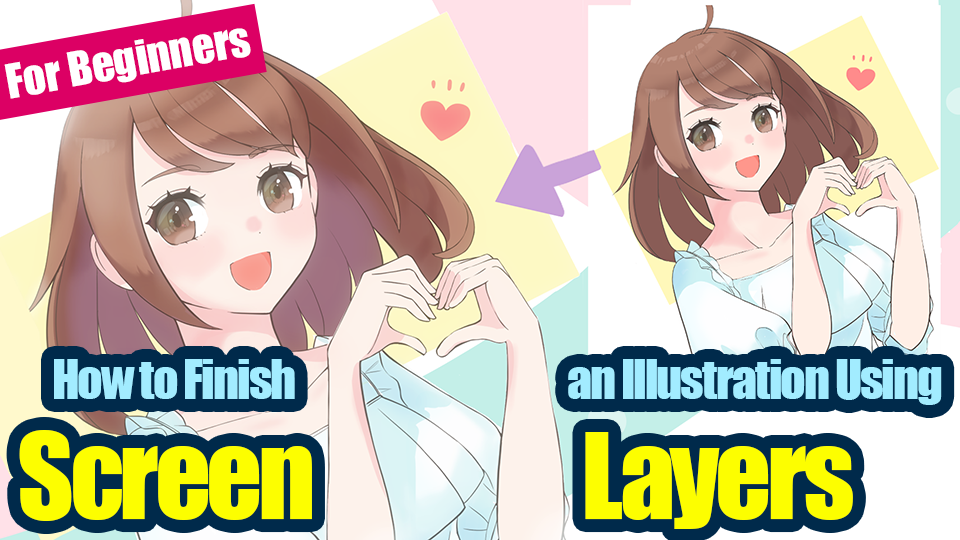 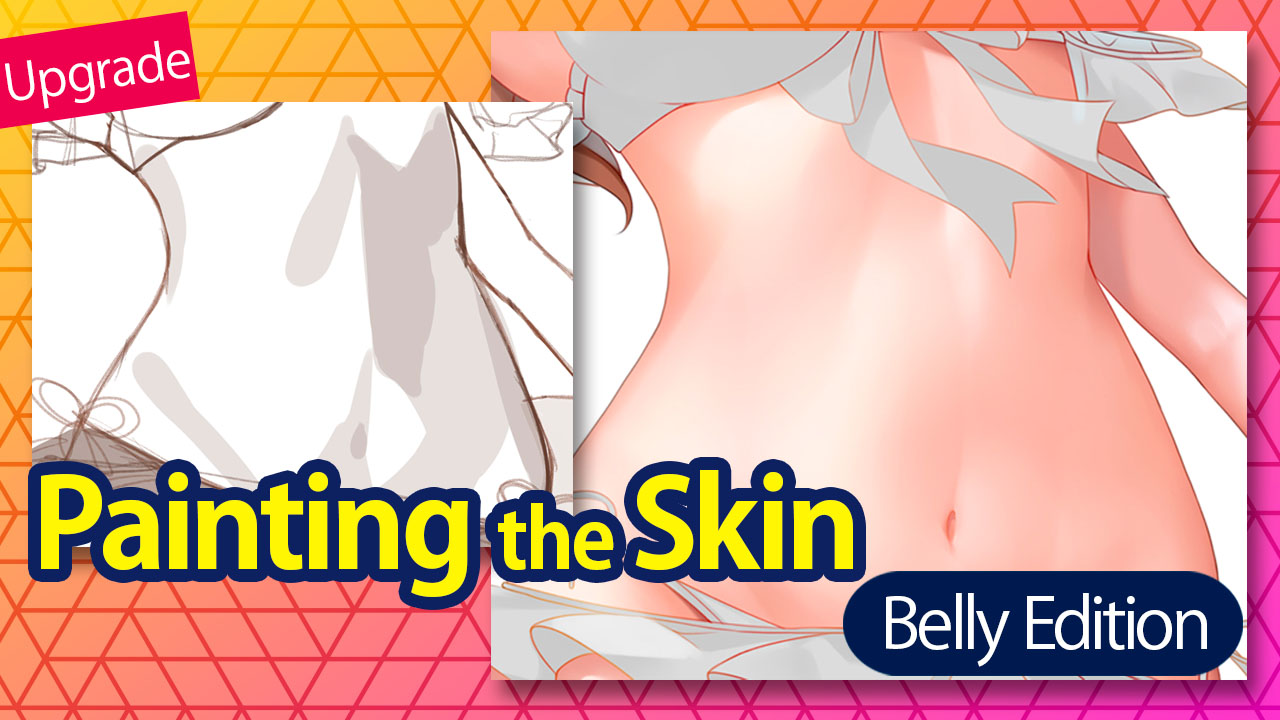 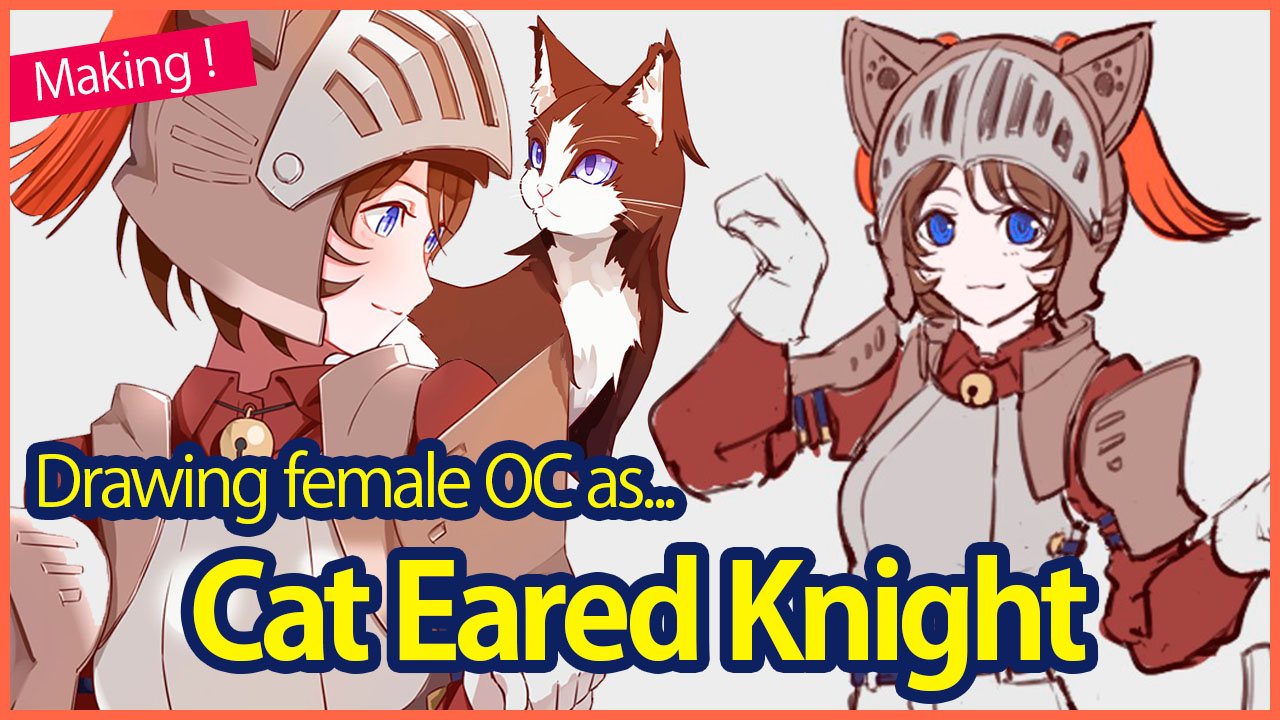 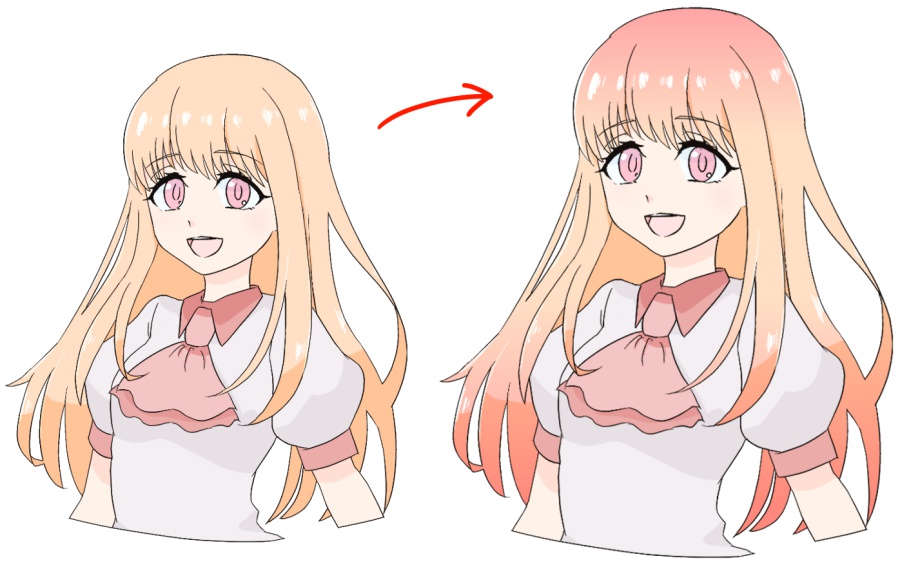